Liv Ullmann's version of Miss Julie starring Colin Farrell and Jessica Chastain, nails the former but its hard to digest narrative structure leads it to fall just short of being an alluring love triangle.

Based on the 19th century Swedish play by August Strindberg, the setting has been changed to 1890 Northern Ireland. Yet the setting is largely insignificant when you consider the fact that much of the story is set indoors - in the kitchen to be exact.

Miss Julie's central strength is Jessica Chastain's riveting portrayal of the title character - an aristocrat so much a prisoner in her massive castle that she longingly stares at its gated entrance - unable to fathom a world beyond it.

So what's a bored lady of the house to do for amusement? Engage in acts of flirtation with John (Colin Farrell) the valet that affirm her superiorly and his inability to deny her every command - as much as he may initially resist. In one particularly telling moment, she insists he kneel down and kiss her boot. He's forced to oblige and the sexual tension between them is forced to the surface. But this isn't a formulaic tale of a rich woman falling for the help and the obstacles they face, but rather an exploration of the rise of capitalist ideas and a period of time in which members of lower classes were starting to devise ways to obtain wealth even though they were not born with it.

As effective as Chastain's turn is, Miss Julie's inability to veer from the rigid social constructs that bind her read as weakness. Especially when compared to similar literary and theatrical heroines forced to endure the same. For instance, Catherine Sloper in The Heiress - a character Chastain portrayed on Broadway in 2012 is far more appealing to watch as she takes charge of the hand that has been dealt her and channels her despair into vengeance.

Slightly less pitiable is Kathleen (Samantha Morton), the cook who despite being in some sort of relationship with John - does little to intervene as Miss Julie toys with him for sport. Of course, this is because she has little choice but to look the other way. 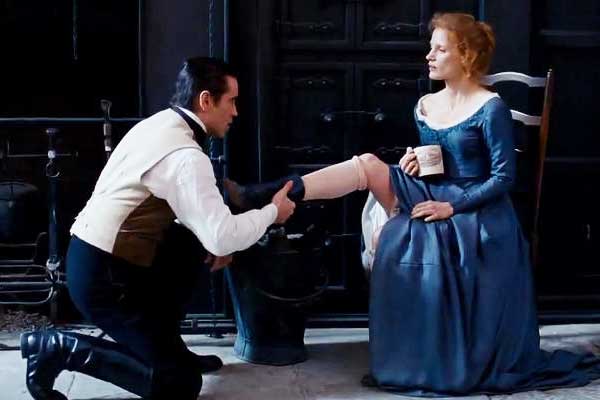 Kathleen is no less expected to give into Miss Julie's every request as John is - even if that means having to feed poison to her possibly pregnant dog.

But where Kathleen and John differ is in his crippling hate of the rich and his plan to destroy Miss Julie - which starts with him seducing her (as Kathleen listens) and ends with her being a distract, ruined woman.

The faultiness John's plot against her is that it's never quite clear what his overall mission is. Farrell perfectly captures his boiling emotions and conflicted nature but the character's convoluted motivations are exhausting.

Ullman's decision to let scenes linger that don't serve the narrative outright would make more sense in a miniseries adaptation of the play. Here, those moments account for about 30 minutes that could have been trimmed from the drama's 129 minute runtime.

It all makes for a tiring marathon that leads the final moments to feel like a chore to get through. And though the film's parting image is visually striking and hauntingly symbolic - it doesn't quite have the jolting effect its supposed to.

MISS JULIE played at the 2014 Toronto International Film Festival and is scheduled to open in the United States October 9th.