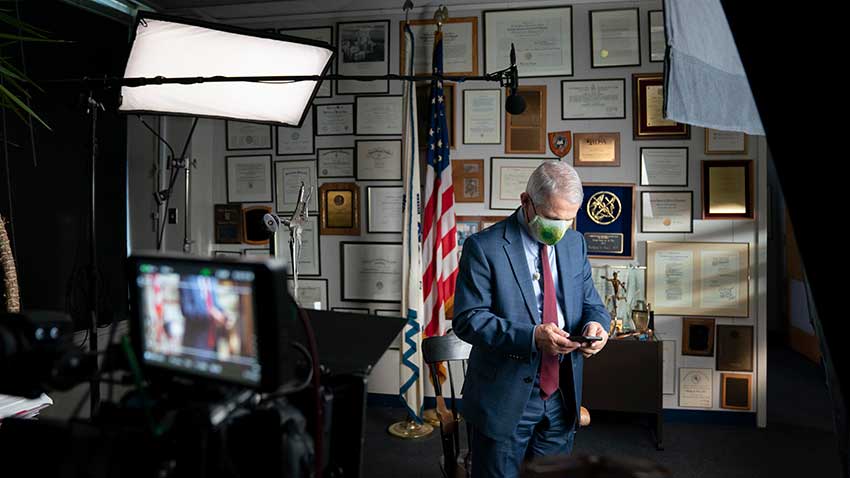 The feature documentary will give us an in-depth look at his personal life as well as a world-renowned infectious disease specialist who's worked for seven administrations. In the documentary, President George W. Bush, Bill Gates, Bono and others will talk about Dr. Fauci's 50 year service as America's beloved public servant.

See the full announcement below.

Dubbed “America’s Doctor” by The New Yorker, Dr. Fauci has become America’s most unlikely cultural icon, with his signature blend of scientific acumen, candor, courage and integrity in the face of COVID-19. He has been affectionately spoofed by Oscar winner Brad Pitt and memorialised by Fauci fans who have put his face on everything from coffee mugs to candles. He is a tireless and effective communicator who has captured hearts and minds across the nation and around the world for his willingness to speak truth to power during an unprecedented pandemic. But less is known about the journey that led him to where he is today.

A world-renowned infectious disease specialist, Dr. Fauci has valiantly led the US fight against every epidemic our country has faced over the past 50 years, from AIDS to SARS to Ebola, and now, COVID-19. The longest-serving public health leader in Washington, Dr. Fauci has worked under seven presidents and is revered on both sides of the aisle. He has testified before Congress — with his trademark Brooklyn accent — more than any other person in American history. Through intimate interviews, Dr. Fauci takes us on a journey through his remarkable career, with a particular focus on HIV/AIDS — from the dark years when there was no treatment and little funding to the advent of triple therapy, and his efforts to bring cutting-edge medications to sub-Saharan Africa through the development of The President’s Emergency Plan For AIDS Relief (PEPFAR), which has saved more than 18 million lives since 2003.

But the man America has come to know and trust over this past year was forged even earlier: during his childhood in Brooklyn working at his father’s pharmacy, by his rigorous Jesuit education at Regis High School and Holy Cross College that instilled in him a sense of duty to others, and in the endless night shifts during his residency at New York Hospital.

The film will also feature the voices of many of those who have influenced him, and whom he has worked alongside — and for — including President George W. Bush, Bill Gates, Bono, former Department of Health and Human Services (HHS) secretary Sylvia Burwell, former national security advisor Susan Rice, National Institutes of Health (NIH) director Dr. Francis Collins, former Centers for Disease Control and Prevention (CDC) director Dr. Tom Frieden, key AIDS activists and organisers, and many others, including his family, friends and former patients.

“There is only one Dr. Fauci, and it is an incredible privilege to bring his inspiring, lifelong quest to cure disease and prevent outbreaks, to viewers around the world,” said Hoffman and Tobias. “This film will be an unprecedented, intimate portrait of America's greatest public servant, whose relentless pursuit of truth and devotion to science has never been more important.”

“Dr. Fauci has become a household name because of COVID-19, but what people may not realise is the heroic and integral role he has played in shaping our national response to serious health crises for more than 50 years,” said Carolyn Bernstein, EVP scripted content and documentary films for National Geographic. “We could not ask for better partners than John, Janet, Dan and Liz to bring audiences this inside look at the man behind the legacy, and we hope his remarkable story will inspire a new generation to pursue public service with the same commitment and verve.”

The film is directed by John Hoffman and Janet Tobias, who have spent their careers telling important and compelling stories about science and public health. Over the past 36 years, Hoffman has made a specialty of communicating to a concerned public about disease, starting with HIV prevention and then addiction, Alzheimer’s, obesity, sleep, and the role of the NIH in leading the way on medical breakthroughs. Tobias’ recent film, “Unseen Enemy,” sounded a warning call about the threat of pandemics, which should not have gone unheeded.

FAUCI is produced by Alexandra Moss (“Not Done: Women Remaking America”) and edited by Amy Foote (“Father, Soldier, Son”). Director of photography is Claudia Raschke (“RBG”). For Story Syndicate, executive producers are Cogan, Garbus and Jon Bardin (“All In: The Fight for Democracy”).