Quickie News Of The Week: Cobra Kai, No Time To Die, Spider-Man 3 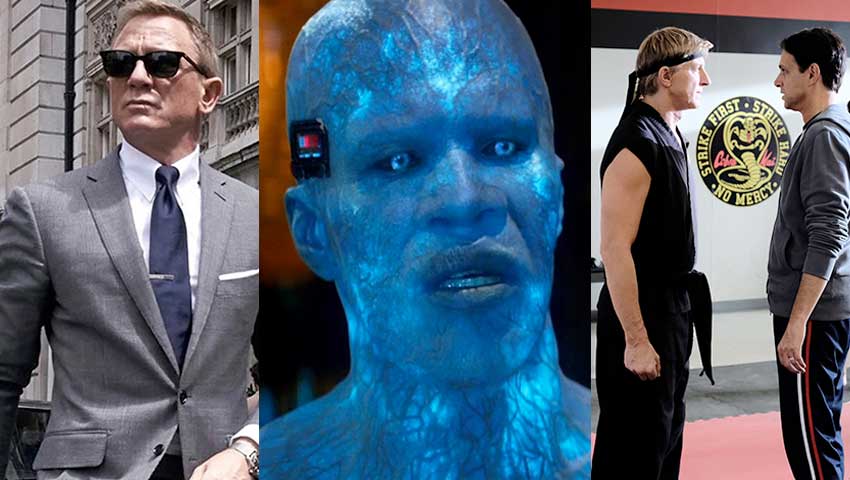 The last week of September brought about lots of movie and streaming series news. Jamie Foxx returns to the Spider-man franchise as Electro, "Cobra Kai" season 3 premiere date was announced and a major Hollywood film finally moves out of 2020. Get your quickie update on all the latest news below.

NO TIME TO DIE

Sony Pictures has moved NO TIME TO DIE, the 27th film in the James Bond's franchise to April 2, 2021. Given the current climate and TENET and THE NEW MUTANTS lackluster box office returns, it makes financial sense to move the expensive production.

Bond (Daniel Craig) comes out of retirement to save the world from Rami Malek's villain. It looks like he's got a lot of backup with the new 007 played by Lashana Lynch, Naomi Harris, Jeffrey Wright and finally a Latina Bond girl, Ana de Armas.

MGM, Universal and Bond producers, Michael G. Wilson and Barbara Broccoli, today announced the release of NO TIME TO DIE, the 25th film in the James Bond series, will be delayed until 2 April 2021 in order to be seen by a worldwide theatrical audience. pic.twitter.com/NqHlU24Ho3

Jamie Foxx will reprise his role as Electro from THE AMAZING SPIDER-MAN 2 in the upcoming SPIDER-MAN 3 with Tom Holland. He's the second actor to rejoin the Spider-Man universe after J.K. Simmons appeared in FAR FROM HOME as J. Jonah Jameson revealing Spider-Man's identity.

Rumors were also circulating online that a Spider-verse may be in the works as a live-action project and we may see Tobey Maguire and Andrew Garfield reprise their role as Peter Parker. No doubt we're all rooting for that to come to fruition.

Oscar Isaac will be playing Francis Ford Coppola in the making of "The Godfather" titled “Francis and The Godfather” with Jake Gyllenhaal as Hollywood producer Robert Evans. The Barry Levinson film tells the behind the scenes struggles behind the iconic movie. The casting of Marlon Brando and Al Pacino were a source of contention at Paramount, and the stories have become epic.

Zendaya
Zendaya is in talks to play Ronettes singer Ronnie Spector in a biopic from A24. See full story.

"Cobra Kai" moved to Netflix from YouTube this summer, and since then the show is an even bigger hit. Season 3 will now premiere in January 2021, and Netflix announced there will be a season 4.

In the first teaser, a heartbeat leads to a flatline which teases that someone will die. Hopefully it's not Miguel as he wakes up in the trailer. Could it signal the end of Cobra Kai or the end of Kreese, although the longline is "Cobra Kai Never Dies" counters that idea. Very interesting.

As Kreese says, "The story is just beginning." Season 3 premieres January 8, 2021 only on @Netflix.
And gear up because Season 4 is officially training to join the fight.
Cobra Kai Never Dies. pic.twitter.com/7znfWTHyuJ

Since the show swept up at the Emmy Awards in September, Netflix is riding the high by releasing Season 6 early.

Sacha Baron Cohen is back as Borat in an Amazon movie premiering October 23. The title is rather long for a sequel, THE BORAT SUBSEQUENT MOVIEFILM: DELIVERY OF PRODIGIOUS BRIBE TO AMERICAN REGIME FOR MAKE BENEFIT ONCE GLORIOUS NATION OF KAZAKHSTAN.

However, he's no longer undercover as most people recognize him so he dresses up in different disguises including the current US president.

Marvel's first Muslim superhero Kamala Khan aka Ms. Marvel will be getting a Disney+ series. Canadian actress Iman Vellani will be playing the teenage Pakistani American with shapeshifting abilities from New Jersey. In the Marvel comics, Kamala takes over for Captain Marvel in the comics.

THE KISSING BOOTH star is getting into the producing business as well as starring in her next Netflix movie, UGLIES directed by McG. UGLIES is based on Scott Westerfeld's novel which is set in a dystopian world where every 16 year old goes under the knife to get a makeover to fit a standard of beauty. Sounds scary.