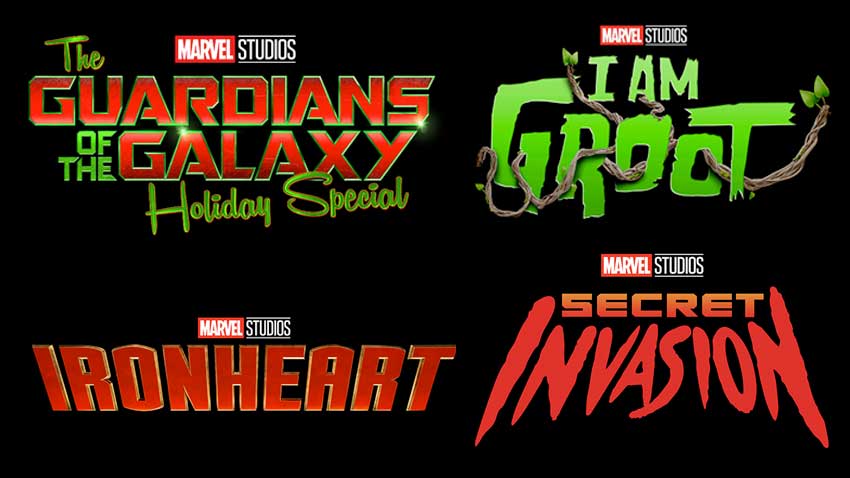 And you get a Marvel series! You and you get a Marvel series! It seems the Avengers are assembling once again but on Disney+. Aside from Jeremy Renner, Elizabeth Olsen, Paul Bettany, Tom Hiddleston, Sebastian Stan, Anthony Mackie and a baby tree, Groot, their fellow Avengers Samuel L. Jackson's Nick Fury, Don Cheadle's War Machine/James Rhoades and Ben Mendlesohn's Skrull character will each reprise their roles for spin-offs on Disney+. There will be a GUARDIANS OF THE GALAXY Holiday special and Groot shorts as well. Along with the previously announced new characters getting a series, a few more iconic comic book characters are joining the MCU. See the complete breakdown, and a few new previews for the upcoming series.

Marvel Studios' Kevin Feige revealed the MCU will be much more immersive, and all Disney+ series will be connected to the theatrical releases. Along with presenting current MCU characters getting a Disney+ series, he also announced all the new diverse faces taking on iconic comic book characters

Read the complete list of MCU projects coming to Disney+.

The Falcon and The Winter Soldier
The Falcon and The Winter Soldier, kicking off on Disney+ March 19, 2021, is a new series starring Anthony Mackie as Sam Wilson aka The Falcon, and Sebastian Stan as Bucky Barnes aka The Winter Soldier. The pair, who came together in the final moments of “Avengers: Endgame,” team up on a global adventure that tests their abilities—and their patience. Directed by Kari Skogland with Malcolm Spellman serving as head writer, the six-episode series also stars Daniel Brühl as Baron Zemo, Emily VanCamp as Sharon Carter, and Wyatt Russell as John Walker.

Loki
Loki is set to debut on Disney+ in May 2021 featuring the God of Mischief as he steps out of his brother’s shadow in a new series that takes place after the events of “Avengers: Endgame.” Tom Hiddleston returns as the title character, joined by Owen Wilson, Gugu Mbatha-Raw, Sophia Di Martino, Wunmi Mosaku and Richard E. Grant. Kate Herron directs Loki, and Michael Waldron is head writer.

What If…?
What If…? flips the script on the MCU, reimagining famous events from the films in unexpected ways. Coming to Disney+ in Summer 2021, Marvel Studios’ first animated series focuses on different heroes from the MCU, featuring a voice cast that includes a host of stars who reprise their roles. The series is directed by Bryan Andrews; Ashley Bradley is head writer.

She-Hulk
She-Hulk, a new comedy series coming to Disney+, stars Tatiana Maslany as She-Hulk/Jennifer Walters, a lawyer who specializes in superhuman-oriented legal cases. She-Hulk will welcome a host of Marvel characters to the series, including the Hulk, played by Mark Ruffalo, and the Abomination, played by Tim Roth. The series is directed by Kat Coiro and Anu Valia; Jessica Gao is head writer.

Moon Knight
Moon Knight is a new series created for Disney+. Directed by Mohamed Diab, the action-adventure features a complex vigilante who suffers from dissociative identity disorder. The multiple identities who live inside him are distinct characters who appear against a backdrop of Egyptian iconography.

Secret Invasion
Secret Invasion is a newly announced series heading to Disney+ that stars Samuel L. Jackson as Nick Fury and Ben Mendelsohn as the Skrull Talos—characters who first met in “Captain Marvel.” The crossover comic event series showcases a faction of shape-shifting Skrulls who have been infiltrating Earth for years.

Ironheart
Ironheart, the second of the newly announced series coming to Disney+, stars Dominique Thorne as Riri Williams, a genius inventor who creates the most advanced suit of armor since Iron Man.

Armor Wars
Armor Wars, based on the classic Marvel comic series, comes to Disney+ starring Don Cheadle as James Rhodes aka War Machine who must face what happens when Tony Stark’s tech falls into the wrong hands.

I Am Groot
I Am Groot features everyone’s favorite baby tree in a series of original shorts coming to Disney+.