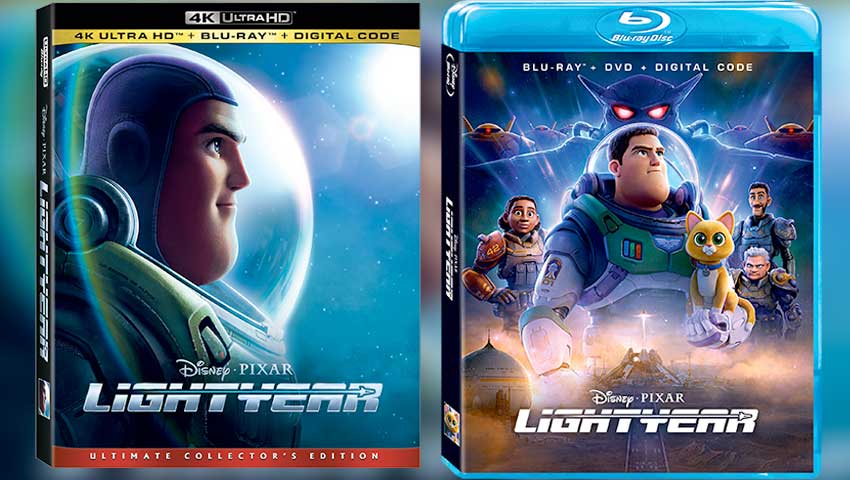 Disney and Pixar Studios' LIGHTYEAR will arrive on 4K Ultra HD, Blu-ray and DVD on September 13 with the usual bonus features such as deleted scenes, featurettes and audio commentary but not much else, unfortunately. Check out the specs for the discs and a complete list of bonus material below.

LIGHTYEAR is currently streaming on Disney+. Voiced by Chris Evans, Buzz Lightyear is re-imagined as the movie character in which the TOY STORY children's toy was based on.

LIGHTYEAR follows the legendary Space Ranger on an intergalactic adventure alongside ambitious recruits, Izzy, Mo and Darby, and his robot companion Sox. As this motley crew embark on their toughest mission yet, they must learn to work as a team to escape the evil Zurg and his dutiful robot army who are never far behind.

Deleted Scenes Introduction – Director Angus MacLane introduces six scenes that are all drawn, set to music, timed and voiced, but are not included in the final version of this amazing film – which took five and a half years to make!

The Dump – In one of LIGHTYEAR’s original opening scenes, we explore Proxima B, with its carnivorous plants, sulfur pits, weird bugs, hot climate, and lack of coffee! A familiar Space Ranger volunteers to risk all in an effort to return to Earth.

Polly – Buzz relives childhood memories when he visits an aeronautic museum in which his father is memorialized. There, he finds Polly, his dad’s robot companion bird, who possesses a very revealing recorded message meant for Buzz!

Meet Izzy – After young Izzy and her family (including her brother Maurice) move in next door to Buzz, the adorable, talkative girl bursts into Buzz’s home, warms up to Sox, and asks Buzz a lot of questions.

Up in the Lair – After his spacecraft crash-lands and he winds up in the bunker of fledgling Space Rangers, Buzz is introduced to cheesy snacks and a character whose role was cut due to time. He also receives shocking information about his father.

Tilted Ship – Star Command Space Rangers of the 56th Airborne Alpha Quadrant meet Buzz and the Space Ranger students. Buzz is given a truth serum so he’ll expose whatever he knows about his father’s connection to the aliens who have taken over Proxima B.

Fathership – Buzz wakes up in what he thinks is his childhood home, where he meets his father, who was a time travel pilot, just as he is. But it turns out he’s on the mothership of the aliens who are destroying Proxima B – and hope to vanquish Buzz as well!

Building the World of Lightyear – Visits to the Johnson Space Center in Houston and a very familiar cinematic archive gave the filmmakers inspiration as they embarked on the exciting journey of creating Lightyear’s breathtaking production design.

The Zap Patrol – Meet the actors who gave voice to Izzy, Mo and Darby, the untrained, unprepared rangers who join Buzz on the adventure of a lifetime.

While the misfits may not seem ideal for the mission, their unlikely friendship helps see them through challenging times.
Toyetic – Learn why Lightyear is one of the most “toyetic” films ever. Join director Angus MacLane and others on the meticulous, fun process of creating toy models for spaceships and other production elements that led to the film’s richly textured animation.

Lightyear Filmmaker Commentary – Join director Angus MacLane, writer Jason Headley, and director of photography Jeremy Lasky as they provide insight into the making of this remarkable animated feature while you watch it.