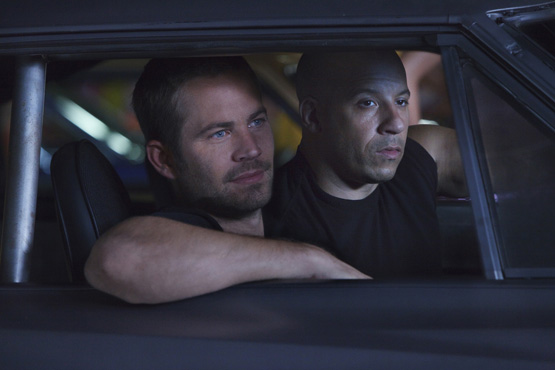 FAST & FURIOUS 7 has resumed production and the movie's Facebook page has announced that Paul Walker's brothers join the shoot as Paul's stand-ins.

FAST & FURIOUS 7 stopped production late last year after Paul Walker's tragic death. Universal Pictures and the production delayed resuming production to figure out how to handle Paul Walker's remaining scenes. The announcement on the movie's Facebook page says all this pivotal scenes were shot before his passing, but his brothers Caleb and Cody have been brought on to help shoot remaining action scenes.

Read more of the announcement from the FAST & FURIOUS 7 Facebook page below.  The movie is set to open April 10, 2015!

A Note to the Fans of FAST & FURIOUS

The FAST & FURIOUS saga is about family. The characters are connected by the bond of family, and it is how all of us who have worked together for more than thirteen years feel about each other. It certainly defines how we feel about our fans.

Our family experienced an unthinkable shock in November. We had to take time to grieve Paul, the brother we love and lost, and to figure out if we should move on with our film.

We came together and all felt the only choice was to continue. We believe our fans want that, and we believe Paul would want that too. Paul had already shot his dramatic scenes and most of his action for FAST & FURIOUS 7, and it’s among the strongest work of his career.

We have resumed shooting and now welcome Paul’s brothers, Caleb and Cody, into our FAST family. Caleb and Cody are helping us complete some remaining action for their brother and fill in small gaps left in production. Having them on set has made us all feel that Paul is with us too.

We are just under a year away from the release of FAST & FURIOUS 7, and this film is the most important we’ve ever done together. It will allow the character of Brian O’Conner to live on and let us celebrate Paul in his most defining role.

We wanted to take a moment to speak to our fans directly and thank you for the love and support you always show us as we resume our work.