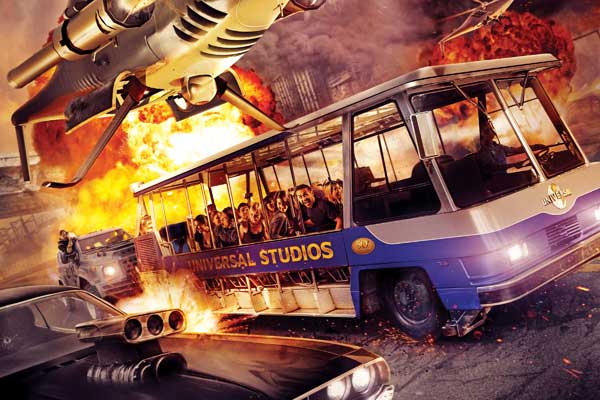 If you’re feeling the need for speed, Universal Studios Hollywood has revealed a preview for the “Fast & Furious—Supercharged” ride opening this summer. Watch the tv spot which ran during NBC’s Super Bowl Pre-Game coverage.

Universal Studios HollywoodSM shifts into high gear with the debut of an innovative, national 30-second commercial for its summer 2015 launch of the “Fast & Furious—Supercharged” thrill ride during NBC’s Super Bowl Pre-Game coverage on Sunday, February 1, 2015.

“Fast & Furious—Supercharged” will reunite stars from the Fast & Furious series in a groundbreaking mega-attraction, conceived as a new installment to the dynamic film franchise that can only be experienced at The Entertainment Capital of L.A.  Featuring Vin Diesel (Dominic “Dom” Toretto), Michelle Rodriguez (Letty Ortiz), Dwayne Johnson (Luke Hobbs), Tyrese Gibson (Roman Pearce) and Luke Evans (Owen Shaw), “Fast & Furious—Supercharged” will catapult guests into the high-stakes underground world of fast cars in a harrowing escapade to save one of their own from an international crime cartel.

Coupled with an intense blend of thrilling visceral effects, “Fast & Furious—Supercharged” will take guests on a wild ride that begins the moment they board the Studio Tour.  Exclusive interstitial content, filmed with the cast members, will be featured on the tram monitors highlighting interactions as they engage guests en route to the ride’s climatic scenes.  Along the tram route and featured at the ride, sightings of numerous prop cars from the Fast & Furious series, including Dom’s iconic Dodge Charger, will enhance the story.

The adventure will culminate with spectacular action sequences that send guests careening through the streets of Los Angeles—at perceived speeds in excess of 120 miles per hour—aided by the elite team of unforgettable heroes.