Two more Spider-man movies are in the works for 2016 and 2018, and two spin-offs featuring Sinister Six and Venom from the Spider-Man comic books. The follow up to the reboot spends lots of time setting up future films and the Oscorp as the evil corporation manufacturing villains. Don’t blink during the movie or you might miss a glimpse of Doc Ock’s mechanical arms and Vulture’s signature wings.  No other Spider-Man movie has included so much mythology from the comic books like in THE AMAZING SPIDERMAN 2.  While Spider-Man is a Marvel comic book character, Marvel Studios under Disney doesn’t have the rights to the property.  Movie studios other than Disney who have rights to other Marvel superheroes (X-Men, Fantastic Four) may be taking a queue from the Avengers franchise to spawn their own Avenger-like superheroes.

All the little Easter eggs in the film are actually more intriguing than the action, which often times looks too much like a video game rather than live action. The previous film did a good job of not making it feel so digital, but this feels less raw and way too polished. 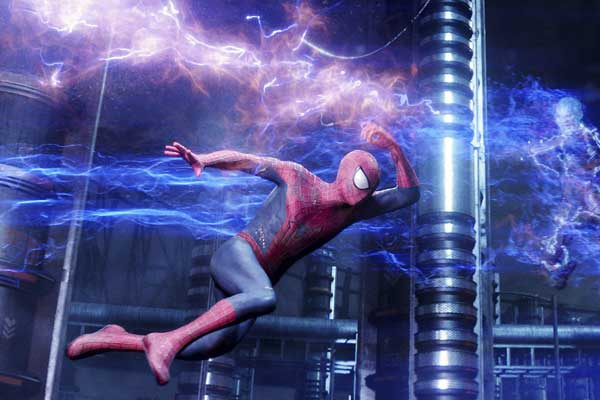 The mystery behind Peter Parker’s parent’s disappearance is also revealed which is a lot more sinister than we thought and also explains why Parker was the only one affected by the spider bite.   Chris Cooper also makes a brief appearance as Norman Osborn as we learn of his sinister deeds as the owner of Oscop and Harry’s father.

The love story between Peter Parker and Gwen Stacy continues to be compelling with a new set of obstacles keeping them apart.  We continue to root for that relationship played by real-life couple Andrew Garfield and Emma Stone. We’re hoping for a happy ending, but fans of the comic book series know what’s coming.

As far as the villains go, Jamie Foxx’s Electro is more of a distraction rather than a worthy adversary for Spider-Man. As Max Dillon, Foxx plays it too hockey as super nerdy engineer at Oscop with his funky jerry curl and gapped teeth.

Then Paul Giamatti takes it over-the-top as well as the criminal who eventually becomes Rhino.  Hopefully Oscorp will improve that clunky Rhino armor for his next outing against Spider-Man.

Dane DeHaan, on the other hand, plays it low-key, but all he needs are those mad eyes of his to see the instability of the character that will eventually become the Green Goblin.  It will be interesting to see DeHaan as the leader of the Sinister Six in upcoming films.

There’s certainly many “Oh!” moments with certain reveals and a shocking ending (not so shocking to some), but not many impressive action scenes except for the climatic one between Spider-Man and the Green Goblin which involves Gwen.  THE AMAZING SPIDER-MAN is slightly over two hours, but it drags due the heavy dialogue scenes in Act II.  There are some uneven moments with Spider-Man being a jokester in one scene and too serious in the next when he’s haunted by Gwen’s father who died in the last movie.

Basically all the interesting tidbits and backstory in THE AMAZING SPIDER-MAN 2 detract from the fact that the movie as an action film just doesn’t thrill enough.  However, the set up of future Spider-Man franchises and the small Easter eggs planted throughout the movie kept you intrigued and wishing you had a note pad to jot down all the information thrown at you.

THE AMAZING SPIDER-MAN 2 opens May 2nd.