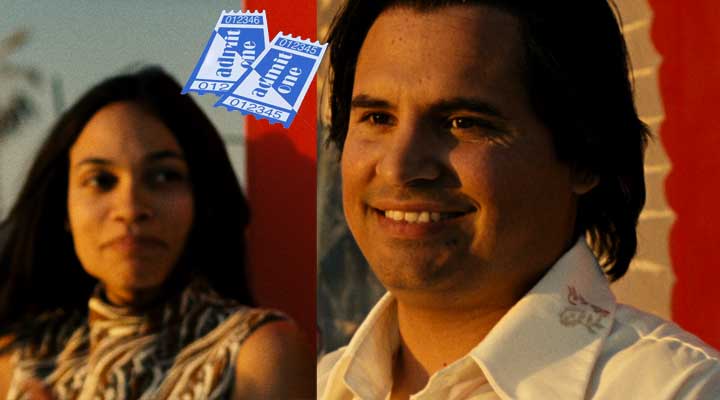 Want to hang out with Rosario Dawson, Michael Peña, America Ferrera and Diego Luna at the CESAR CHAVEZ Hollywood movie premiere? CineMovie is giving one lucky winner tickets to the red carpet premiere to watch Michael Peña star as legendary activist Cesar Chavez in a movie directed by Diego Luna. Read on to find out how to enter the CESAR CHAVEZ Premiere Movie Ticket Giveaway.

Chronicling the birth of a modern American movement, Cesar Chavez tells the story of the famed civil rights leader and labor organizer torn between his duties as a husband and father and his commitment to securing a living wage for farm workers. Passionate but soft-spoken, Chavez embraced non-violence as he battled greed and prejudice in his struggle to bring dignity to people. Chavez inspired millions of Americans from all walks of life who never worked on a farm to fight for social justice. His triumphant journey is a remarkable testament to the power of one individual’s ability to change the world. Watch Trailer

To enter the CESAR CHAVEZ Premiere Movie Ticket Giveaway, click on the Entry Form below.

PROMOTION DESCRIPTION: CESAR CHAVEZ Premiere Giveaway (“Sweepstakes”) begins on or about March 12, 2014 2013 at 6:00 p.m. Eastern Time ("ET") and ends on March 19, 2014 at 11:59 p.m. ET (the “Sweepstakes Period”).  At the end of the Sweepstakes Period, a random drawing will be conducted to select winners from among all eligible entries received, as more fully set forth in the OFFICIAL RULES.  Entry in the Sweepstakes does not constitute entry into any other promotion, contest or sweepstakes.  By participating in the Sweepstakes, each entrant unconditionally accepts and agrees to comply with and abide by these Official Rules and the decisions of CineMovie TV, 2700 Arlington Ave. Ste. 101 Torrance, CA  90501 (“Sponsor”), which shall be final and binding in all respects.

No one will be admitted late. This ticket may be used for admission only by the person to whom we issued it; it is not transferable. It has no cash value. The screening will be monitored for unauthorized recording. By attending, you agree not to bring any video or audio recording devices (including, without limitation, cameras) into the venue and you consent to a physical search of your belongings and person for recording devices. If you attempt to enter with a recording device, you will be denied admission. If you attempt to use a recording device during this screening, you consent to your immediate removal from the venue and forfeiture of your recording device and its contents. Any attempted unauthorized recording will be reported to law enforcement and may subject you to criminal and civil liability. We reserve the right to pursue any and all available remedies at law and in equity for any unauthorized recording and/or copyright infringement, including without limitation statutory damages of up to $150,000 per violation, and nothing contained in this notice shall be construed to limit our available remedies and/or legal recourse. You assume all risks of personal injury arising from or incidental to attending the screening, whether occurring prior to, during, or after the event.