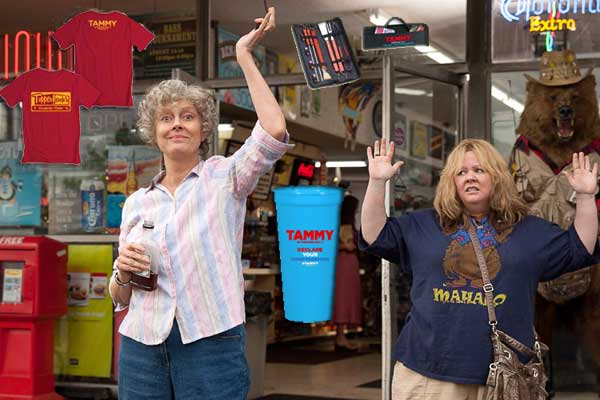 Melissa McCarthy stars in TAMMY and we've got a TAMMY "Independence Pack" giveaway which includes a BBQ kit, Topper Jack T-shirt, Tammy tank, stadium caps, movies passes and more on behalf of the film. Read on to find out how to enter.

Tammy (Melissa McCarthy) is having a bad day.  She’s totaled her clunker car, gotten fired from her thankless job at a greasy burger joint and, instead of finding comfort at home, finds her husband getting comfortable with the neighbor in her own house. It’s time to take her boom box and book it.  The bad news is she’s broke and without wheels.  The worse news is her grandma, Pearl (Susan Sarandon), is her only option—with a car, cash, and an itch to see Niagara Falls.  Not exactly the escape Tammy had in mind.  But on the road, with grandma riding shot gun, it may be just what Tammy needs. Watch Trailer

**Hollywood Movie Money is a free admission voucher to see a predetermined film (TAMMY) redeemable nationwide starting 07/2/14 and valid for a limited time for use in any theater excluding AMC Theaters.

To enter the TAMMY “Independence Pack" Sweepstakes, click on the Entry Form below and finish the following sentence by watching the trailer.

This 4th of July Weekend Declare Your…

PROMOTION DESCRIPTION: TAMMY “Independence Pack" Giveaway (“Sweepstakes”) begins on or about June 22, 2014 at 6:00 p.m. Eastern Time ("ET") and ends on July 6, 2014 at 11:59 p.m. ET (the “Sweepstakes Period”).  At the end of the Sweepstakes Period, a random drawing will be conducted to select winners from among all eligible entries received, as more fully set forth in the OFFICIAL RULES.  Entry in the Sweepstakes does not constitute entry into any other promotion, contest or sweepstakes.  By participating in the Sweepstakes, each entrant unconditionally accepts and agrees to comply with and abide by these Official Rules and the decisions of CineMovie TV, 2700 Arlington Ave. Ste. 101 Torrance, CA  90501 (“Sponsor”), which shall be final and binding in all respects.