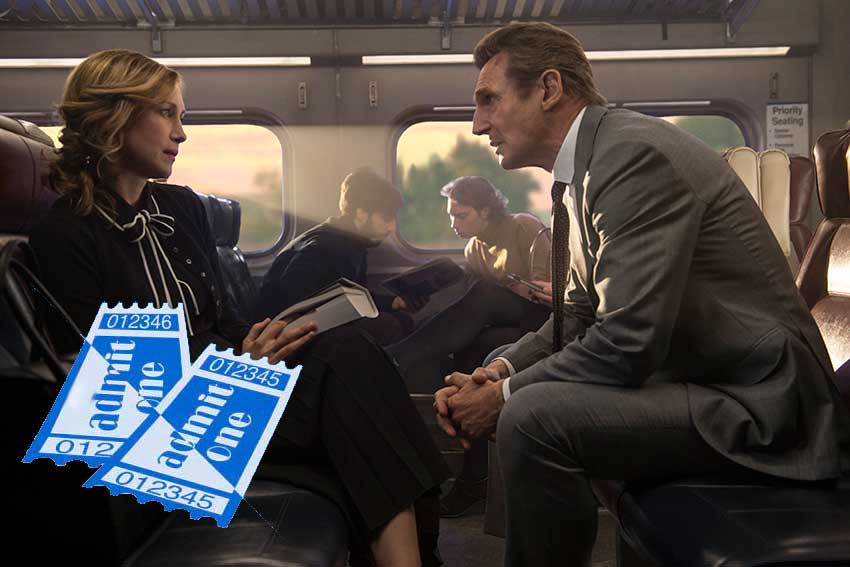 Liam Neeson is back for more action in THE COMMUTER also starring Vera Farmiga, Sam Neill and Patrick Wilson. CineMovie has an advance screening in Los Angeles for THE COMMUTER. Get your free movie passes now (while supplies last).

In this action-packed thriller, Liam Neeson is Michael, an insurance salesman, whose daily commute home quickly becomes anything but routine. After being confronted by a mysterious stranger (Vera Farmiga), Michael is blackmailed into finding the identity of a passenger on his train before the last stop. As he works against the clock to solve the puzzle, Michael is unwittingly caught up in a criminal conspiracy that carries life and death stakes for himself and his fellow passengers.

To enter THE COMMUTER Ticket Giveaway, click on the form below.

PROMOTION DESCRIPTION: THE COMMUTER Ticket Giveaway (“Sweepstakes”) begins on or about December 12, 2017 at 6:00 p.m. Eastern Time ("ET") and ends on December 19, 2017 at 11:59 p.m. ET (the “Sweepstakes Period”) or as long as tickets last.  At the end of the Sweepstakes Period, a random drawing will be conducted to select winners from among all eligible entries received, as more fully set forth in the OFFICIAL RULES.  Entry in the Sweepstakes does not constitute entry into any other promotion, contest or sweepstakes.  By participating in the Sweepstakes, each entrant unconditionally accepts and agrees to comply with and abide by these Official Rules and the decisions of CineMovie TV, 2700 Arlington Ave. Ste. 101 Torrance, CA  90501 (“Sponsor”), which shall be final and binding in all respects.