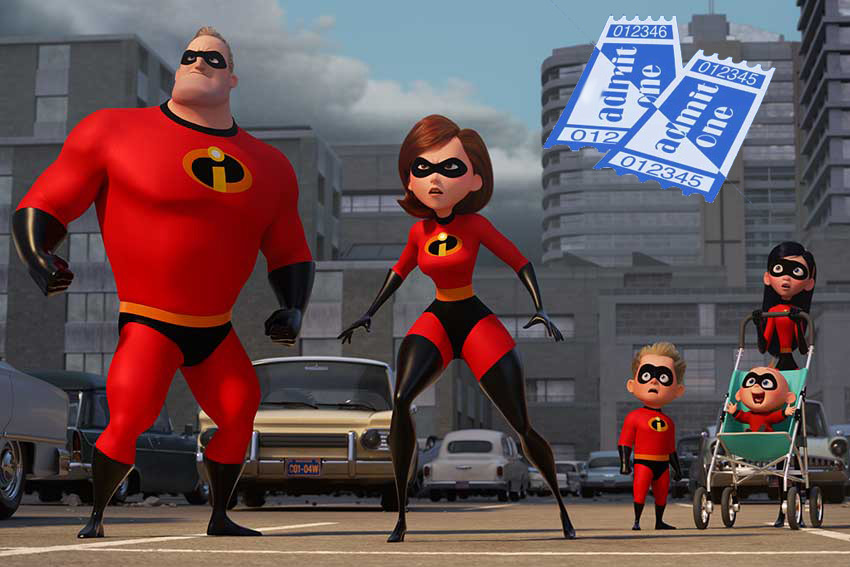 "The Incredibles" are finally back after 14 years for the sequel, and CineMovie has your advance movie screening of "Incredibles 2"  in Los Angeles (Burbank) for a family of four. Enter for your chance to be selected as one of the winners.

In “Incredibles 2,” Helen (voice of Holly Hunter) is called on to lead a campaign to bring Supers back, while Bob (voice of Craig T. Nelson) navigates the day-to-day heroics of “normal” life at home with Violet (voice of Sarah Vowell), Dash (voice of Huck Milner) and baby Jack-Jack—whose super powers are about to be discovered. Their mission is derailed, however, when a new villain emerges with a brilliant and dangerous plot that threatens everything. But the Parrs don’t shy away from a challenge, especially with Frozone (voice of Samuel L. Jackson) by their side. That’s what makes this family soIncredible.

To enter "The Incredibles" Ticket Giveaway, click on the form below.

PROMOTION DESCRIPTION: "The Incredibles" Ticket Giveaway (“Sweepstakes”) begins on or about June 6, 2018 at 6:00 p.m. Eastern Time ("ET") and ends on June 10, 2018 at 11:59 p.m. ET (the “Sweepstakes Period”) or as long as tickets last.  At the end of the Sweepstakes Period, a random drawing will be conducted to select winners from among all eligible entries received, as more fully set forth in the OFFICIAL RULES.  Entry in the Sweepstakes does not constitute entry into any other promotion, contest or sweepstakes.  By participating in the Sweepstakes, each entrant unconditionally accepts and agrees to comply with and abide by these Official Rules and the decisions of CineMovie TV, 2700 Arlington Ave. Ste. 101 Torrance, CA  90501 (“Sponsor”), which shall be final and binding in all respects.