7 Clues To 'Star Wars: The Last Jedi' Revealed By The Director and Cast 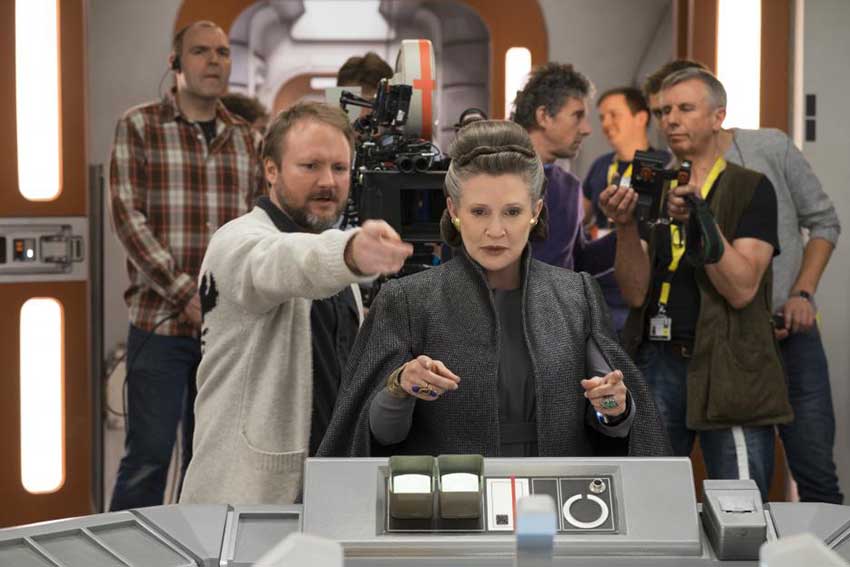 Audiences are about to see STAR WARS: THE LAST JEDI on December 15, and as usual the movie is shrouded in secrecy. CineMovie was at the Los Angeles press conference with director Rian Johnson and the cast. While they didn’t give away major plot points, they did reveal a few clues about Episode 8.

Director Rian Johnson promises the continuation of a space opera that we’ve come to know from STAR WARS movies. Rian pointed to EMPIRE STRIKES BACK as his favorite STAR WARS film. He specifically admires the cinematography and the visual esthetic of EPISODE 5.

‘It’s pretty daring how dark they were willing to go.”

Did he mimic the tone and visual cues from this favorite STAR WARS film?

“I need to shoot this movie how I would shoot a movie.”

Like EMPIRE, however, he will go to intense places, but still maintain the fun aspect of previous movies.

“First and foremost, we wanted to make it feel like a Star Wars movie. That means you have the intensity, and you’ve got the opera. It also means you come out wanting to grab your spaceship toys and make them fly around. And that’s the key ingredient to this.”

Andy Serkis who plays Snoke can attest to that promise by the director. He says the filmmaker “tonally dances” between moods.

“What Rian’s done incredibly is this dance…tonally dance between these great epic moments and hilarious antics. Literally flipping on a dime, and beautifully going into the heart of these beautiful characters.” 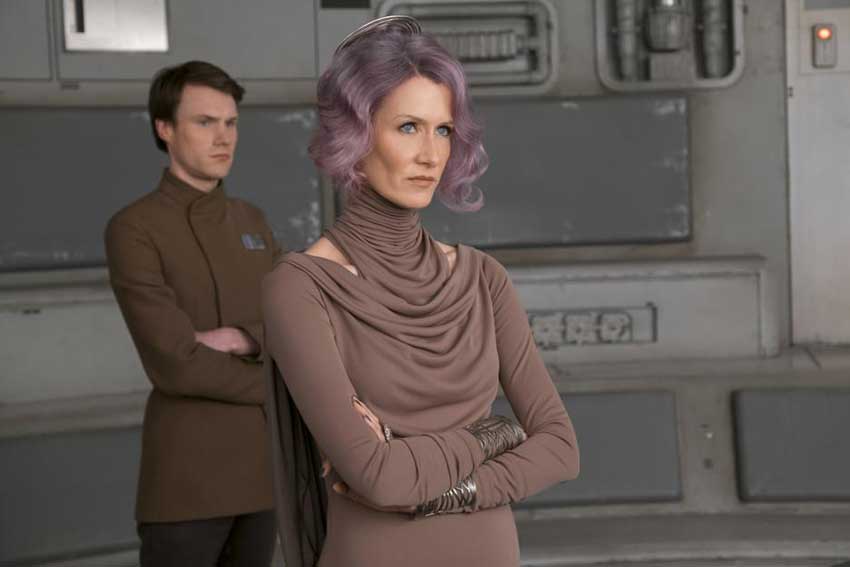 We now know Laura Dern’s character Vice Admiral Holdo is a leader in the resistance. In a previous interview, Dern revealed she many not entirely play well with others. During the press conference while praising Johnson, she also hinted at the kind of character she'll be playing.

“I just want to pay tribute to Rian for being one of the most brilliantly subversive filmmakers I’ve ever been able to bear witness to,, and in the case of my look of my character, I was moved by the fact that he really wanted her strength to first lead with a very deep femininity and to see a powerful female character be feminine. It’s something that moves away from a stereotype  that sometimes is perceived in strong female characters that must be like the boys.”

So she may be playing both sides but with a feminine touch.

“There’s just a human drama going with the people and on a lot of bitchy in-fighting. A united front is difficult.”

In the latest THE LAST JEDI trailer, we also see Kylo's hesitance when it looks like he's about to destroy the space craft carrying his mother General Leia. Now that's some family drama. 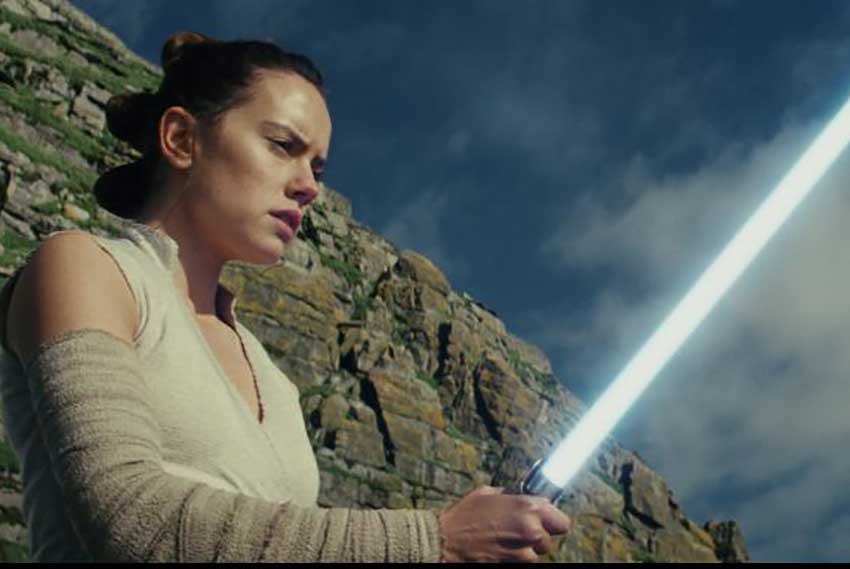 When asked if Han Solo’s death affects any of the characters, Daisy Ridley confirms Solo’s death by Kylo Ren will have a negative effect on her. As an orphan, her new found family in THE FORCE AWAKENS has been broken up. Finn is in a coma and Han Solo is gone forever unless he pulls an Obi-Wan Kenobi in THE LAST JEDI.

“Han represents a figure she never had,” she said at the Los Angeles press conference. “I would say Rey is at least affected by it. Rey is a character that’s been alone for a really long time, and she’s really open to love and friendship.”

In FORCE AWAKENS, Rey’s Jedi powers come into play after seeing Finn knocked out by Kylo. Her anger awakens the Jedi. A theme we’ve seen play out in Luke Skywalker’s training. “Fear is the path to the dark side,” said Yoda in EMPIRE STRIKES BACK. “Fear leads to anger. Anger leads to hate. Hate leads to suffering.”

The Emperor in RETURN OF THE JEDI entices Luke to give into his “anger” to become all-powerful like his father.

It seems anger may be driving Rey in THE LAST JEDI as we see in the most recent trailer for STAR WARS: THE LAST JEDI. Ridley also hinted at her state of mind.

“In the film she’s allowed to ask questions. She has some time to ask questions and wonder what it is that leads people… to have led someone to do something like that, and how that affects the world around her.”

She added that she’s also has Finn on her mind while he recovers from Kylo’s attack. Those are two big motivations that could lead to anger and to the dark side.

Mark Hamill at the press conference questioned whether Luke is actually training Rey as a Jedi.

“You’re assuming I train Rey,” he said. Mark Hamill also put out some doubts as to whether he picks up a lightsaber for THE LAST JEDI. “Do I?,” he said in a playful tone.

Maybe he’s throwing off our scent but if that’s actually true -Luke Skywalker’s  line from the trailer, “This is not going to go the way you think,” may make more sense given that new information.

Director Rian Johnson also offered up an interesting take on the hero which we assume is Rey.  He said George Lucas was partially inspired by the book “The Hero’s Journey” by Joseph Campbell.  He continued that tradition and the following plays out in THE LAST JEDI.

“The hero’s journey is not about becoming a hero. It’s not about becoming Hercules. It’s about adolescence. It’s about the transition from childhood into adulthood, and finding your place in the world. And you have these new powers that you’re feeling inside yourself for the first time, you don’t know what to do with them. You don’t know who you’re going to get help from.  Who’s unreliable, who’s not. Navigating those very tricky waters that we all have to navigate. That’s why it’s so universal.”

Rey certainly has a path, but which side will she choose? 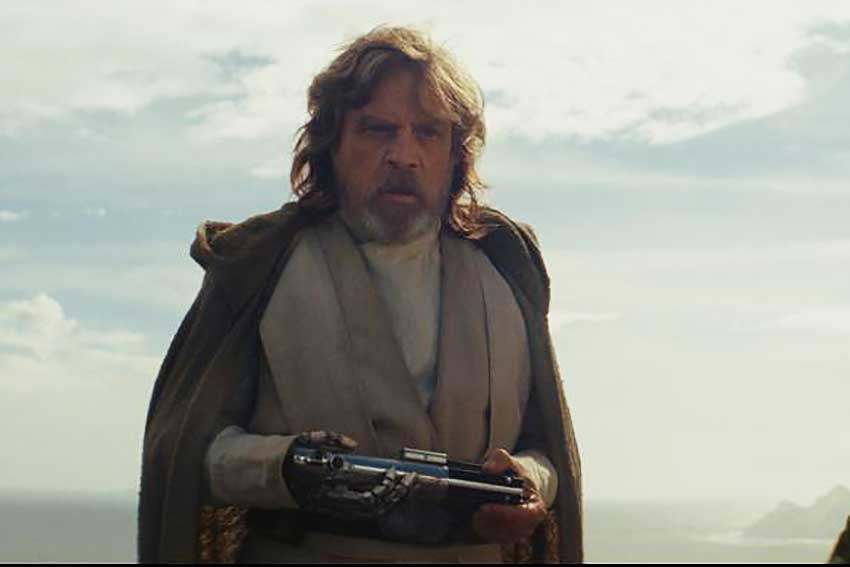 State of the Resistance

Oscar Isaac (“Poe”)  talked about the state of things between The First Order and the Resistance. And it doesn’t look good.

“It’s a dire situation. It’s critical. The Resistance is on its last legs. We’re trying to survive. First Order is right on top of us. It is like war. You just got to keep moving to try to survive. You feel the momentum of everything that happened in THE FORCE AWAKENS. Just pushing and getting to a critical mass.”

The trailer hints at the possible destruction of the Resistance fleet, but who knew the entire mission was in jeopardy

THE LAST JEDI features many women rebels, but one person is not impressed according to Andy Serkis.

“Speaking as the leader of the First Order, I’d say Snoke is very unimpressed the fact that there’s a huge female force that seems to be growing in the universe, said Serkis. “It’s threatening. It’s deeply undermining. It has to be stopped. It can’t go on.”

We know Rey is a threat, but what other woman could cause some alarm. Is Princess Leia finally coming into some of her own Jedi powers? What other female character would cause Snoke to worry? Are any of the new characters such as Vice Admiral Holdo or Rose Tico (Kelly Marie Tran) a potential threat with hidden gifts?

We shall see when STAR WARS: THE LAST JEDI hits theaters on December 15.