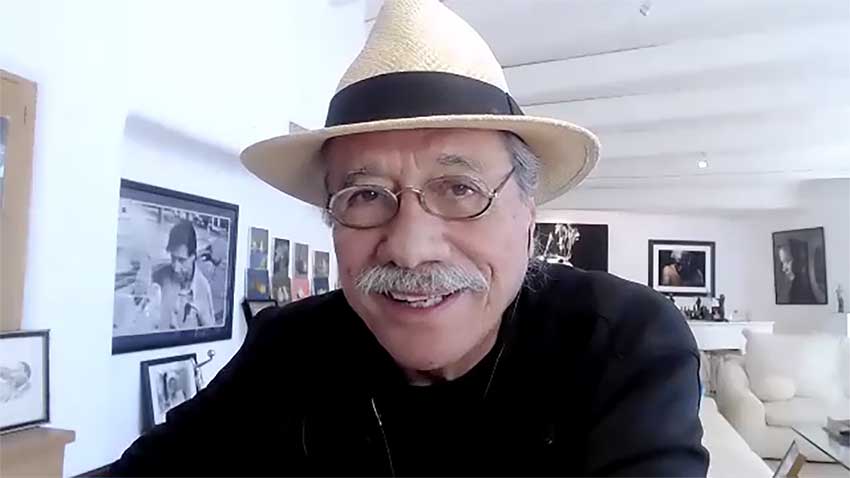 Edward James Olmos stars in WALKING WITH HERB along side George Lopez. During our conversation about his latest movie and long career, we inspired an idea for a superhero movie starring the actor as a character named "El Viejito."What our interview with the iconic actor.

Olmos stars as Joe, a family man who begins to question his faith after a tragedy in WALKING WITH HERB. Herb, played by Lopez, is sent by God to remind Joe of his faith through the game of golf.  The 74-year-old actor explains both he believed Lopez would play Joe since the comedian is a pro-level golfer. However, Olmos who's never played golf was cast to play the lead, got some help from Lopez on golfing tips.

We also asked Olmos about his illustrious career in Hollywood, and he calls himself "fortunate" to still be working while some of his peers go without any new roles. When asked if there was any role he still longs to play, he didn't come up with one until we suggested superhero. We then brainstormed the idea of him as "El Viejito" with his magic cane which he vowed to write. We're 100% for that, and hope he follows through.

WALKING WITH HERB premieres April 30, May 1, and May 3 for a three-night nationwide Fathom Events limited engagement. Find tickets at FathomEvents.com or WalkingWithHerbMovie.com.

WALKING WITH HERB takes audiences on an 18-hole rollercoaster ride as one man discovers how the impossible can become possible through faith, family and second chances. . . and with the help of God’s motorcycle-riding messenger!

Joe Amable-Amo is a bank executive and former amateur golfer struggling with his faith after an unexpected tragedy. Faced with doubts about himself, his purpose and his belief in God, Joe is stunned when God tells him that he’s been chosen to inspire the world and play in a world championship golf tournament.

WALKING WITH HERB features global star Edward James Olmos, comedy legend George Lopez and Kathleen Quinlan. The film is based on the book of the same name by Las Cruces, New Mexico, banker and golfer Joe S. Bullock. It was filmed in Las Cruces.