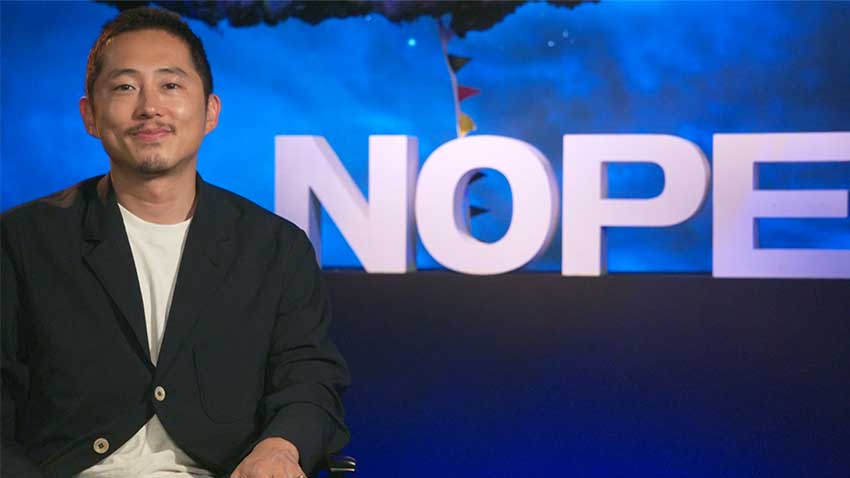 Scorching heat! No problem says NOPE star Steven Yeun who could bear the heat while filming the Jordan Peele movie in the Santa Clarita, CA desert. That might have to do with his time working in extreme outdoor conditions during his many years on The Walking Dead where the actors braved Atlanta's hot and humid conditions. Watch Yeun explain why he didn't wear the cooling vest offered by the crew to keep him cool on the hot shooting days.

The setting is an open range and horse ranch in NOPE. Much of the action takes place outdoors when a strange object or UFO appears to be stalking the area. Yeun plays Jupe, a child actor turned amusement park operator who spends most of the film outdoors in layered costumes. Below he explains why bearing the heat was part of the character.

Oscar® winner Jordan Peele disrupted and redefined modern horror with GET OUT and then US. Now, he reimagines the summer movie with a new pop nightmare: the expansive horror epic, NOPE.

The film reunites Peele with Oscar® winner Daniel Kaluuya (JUDAS AND THE BLACK MESSIAH), who is joined by Keke Palmer (HUSTLERS, ALICE) and Oscar® nominee Steven Yeun (MINARI, OKJA) as residents in a lonely gulch of inland California who bears witness to an uncanny and chilling discovery.

NOPE, which co-stars Michael Wincott (Hitchcock, Westworld) and Brandon Perea (The OA, American Insurrection), is written and directed by Jordan Peele and is produced by Ian Cooper (Us, Candyman) and Jordan Peele for Monkeypaw Productions. The film will be released by Universal Pictures worldwide.

Written and Directed by: Jordan Peele