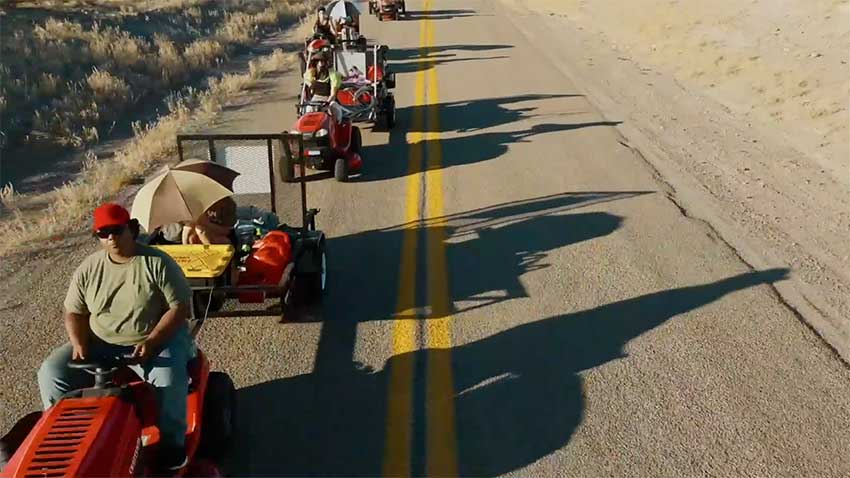 "The Great Grass Race," a new web series from Menace Vision sends 12 contestants across America in a lawnmower traveling at a slow speed of 5.5mphs during the COVID-19 pandemic. Producer/director Cosmo Kiindarius talks about the competition show which sends six teams on the road who have to rely on the generosity of others to survive. This new series is not about who can make it across the finish line first but who earned the most points and minutes.

"The Great Grass Race" recently ended in Tampa, Florida after setting off from Los Angeles in July with 12 contestants divided up in six teams and slowly trekking across America on the slowest vehicle out there - a lawnmower. The MenaceVision.com web series also pits the contestants against harsh weather conditions and the COVID-19 pandemic which limits their interaction with strangers who they must rely on for food and shelter during the competition.

Cosmo Kiindarius reveals the challenges of filming the web series under strict social guidelines because of the ongoing pandemic and extreme weather conditions across the United States as the participants travel over 3,000 miles with no food, no shelter, and not being able to use or take money.

Creator and Executive Producer Denis Oliver had a dream to entertain the world with a reality series that shows that kindness, benevolence, and goodwill still exists in a country that is so divided right now. Watch the drama unfold for free on MenaceVision.com, or find the App on Android or iOS.

Cosmos Kiindarius is a writer and director. His award winning short-films led him to his first feature film in 2016 STAND. A protégé of well-known director David Fincher, led Kiindarius to work with some of Hollywood’s top films such as Zodiac and The Curious Case of Benjamin Button. Currently Kiindarius is producing and directing a show unlike any other he has done before, Menace Vision’s The Great Grass Race. A race with 12 contestants divided into six teams as traveling in most unusually transportation to go from Los Angeles to New York – lawnmowers that only travel 5.5mphs.

Kiindarius was born in Montego Bay, Jamaica and came to the United States as an infant. He grew up traveling across the country with his single mother. After graduating from Folsom High School, he once again traveled the world working odd jobs before ultimately finishing school at Chapman University Film School. While touring the campus of University of Southern California, acclaimed screenwriter, Len Schraeder, having read Kiindarius’ writing, pulled him aside and offered to mentor him if he would follow Schraeder to Chapman University.

After the events of 9/11, Kiindarius was reminded of a childhood commitment and served his country by enlisting in the United States Navy. Between his military responsibilities, he worked extensively on feature films, commercials, and music videos with distinguished directors such as Marcus Nispel, Mark Pellington, Sean Thonson, JJ Abrams, and David Fincher.

After losing a bet to Fincher in 2006, led Kiindarius to direct his first short film The Quickie, which went on to win eight awards on the film festival circuit. Shortly after, he went on to direct another award-winning short film Family Recipes. In 2015, he produced Debra Eisenstadt’s Before the Sun Explodes which premiered in competition at SXSW 2016 and then went on to produce Eisenstadt’s Imaginary Order.

Through the course of his service with the Navy, Kiindarius discovered the urgent problem that land mines present for thousands of people around the world and wanted to produce Stand to help draw attention to the cause. Stand would become his first feature film where he wrote, produced, and directed.

As a filmmaker, Kiindarius is drawn to stories rooted in real life that focus on the fringes of society, the marginalized people and issues that are forced from mainstream social consciousness by the safe and pedestrian topics that purposefully avoid challenging societal ideals. He is currently in development on several feature films including, Run Til Dawn and Irezumi and is attached to direct a short film The Americana in New York this summer as well as two features in the American Southwest Dirt and Comienzo set begin production fall of 2018.