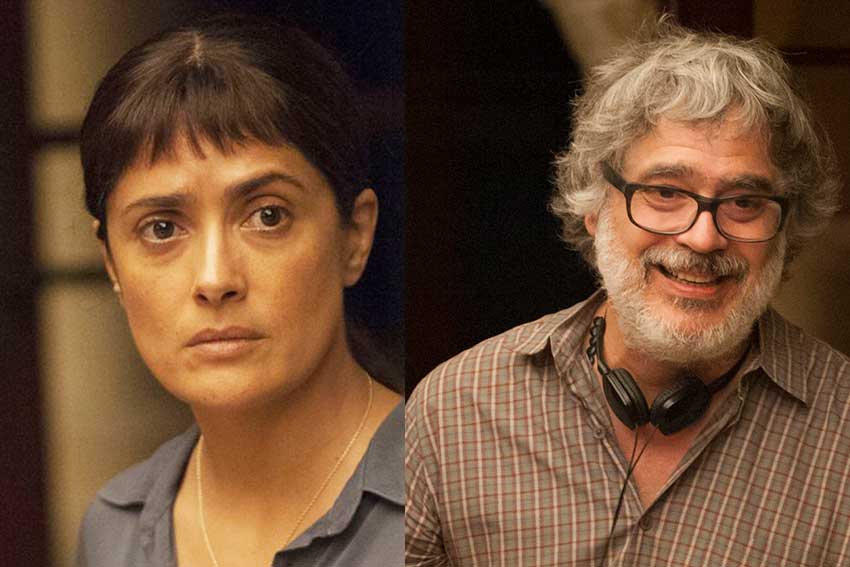 Director Miguel Arteta directs Salma Hayek in one of the most powerful performances of her career in BEATRIZ AT DINNER. CineMovie spoke with the Puerto Rican-born director about his latest movie coming to home release, and his method to bringing out an actor’s best performance.

Miguel Arteta first broke out with the indie hit, STAR MAPS back in 1997, and he continued his success with art house fare such as CHUCK AND BUCK, THE GOOD GIRL (Jennifer Aniston) and his most recent BEATRIZ AT DINNER. In between he directs episodes for various television series.

As far as his movie projects, Arteta hasn’t sold out for bigger Hollywood fare since he prefers more honest and authentic stories.  “I try to make decisions based on if I can put my heart in the story,” says the director.  He did go “Hollywood” for one project in ALEXANDER AND THE TERRIBLE, HORRIBLE, NO GOOD, VERY BAD DAY but the family themed story is what drew him to a big budget film. “I have a hunger for those kind of movies,” he says. Corporate movies don’t allow that freedom of expression.

For BEATRIZ AT DINNER, Arteta teamed up for a third time with actor/writer Mike White (SCHOOL OF ROCK, THE GOOD GIRL). Arteta reveals White specifically wrote the part in BEATRIZ AT DINNER with Salma Hayek in mind. Hayek and Arteta have long talked about working together since she hired him to direct episodes of Ugly Betty.

In BEATRIZ AT DINNER, Salma Hayek is Beatriz - a holistic medicine practitioner who’s stranded at a wealthy client’s (Connie Britton) mansion after her car breaks down.  There she meets her client’s guest, Doug, played by John Lithgow, a Donald Trump-like real estate mogul with no filter.  The dinner party becomes contentious when the insensitive Doug talks negatively of immigrants and climate change. As a holistic healer, Beatriz is a sensitive soul who feels every piercing word especially when Doug talks about killing an endangered animal.

Arteta reveals Mike White started writing the story in the summer of 2015 around the same time  Donald Trump announced his presidential campaign by launching his attack on Mexicans. The character of Doug is partly based on Trump, and on the American dentist who killed Cecil the lion for sport which sparked a national outcry.

“It was a combination of those things that made him think like, ‘what would I do at a dinner party with a person like this. Would I stick a butter knife in his neck. What would I do?,’ says the director. “ We never thought that Donald Trump would get elected while we were writing the movie.”

While there is tension in that dinner party, the Puerto Rican native also wanted some humor to come out of that situation.

“We wanted to make a film that makes you think but it’s also entertaining and funny. The tension and humor go hand in hand in this story where somebody who’s not welcome in this world is literally stuck at a dinner. We’ve all been stuck in a dinner where you’re across somebody you don’t want to be talking to.”

As Beatriz, Salma Hayek plays someone very in touch with her emotions. Beatriz is a bizarre human being who listens attentively to the wealthy ladies complaining about their nails and trainers. She’s clearly out of place in a socio-economic world of the rich. While at first she brushes off the materialistic nature of the group, Doug really gets under her skin as a insensitive man as he boasts about the lion he killed in Africa. After a few drinks, Beatriz becomes unhinged especially when thinking about her pet goat.

Hayek went through an emotional rollercoaster playing Beatriz, reveals Arteta. The Mexican actress didn’t have to imagine losing a beloved pet to play distraught woman. BEATRIZ AT DINNER shot a few months after someone killed her dog while in her backyard.

“She spent three weeks nearly in tears pretending that goat had been killed,’ according to the BEATRIZ AT DINNER director. “She cares about animals deeply. She has an animal sanctuary where she rescues animals. It was pretty easy for her to draw from real life.”

Like any other director, a filmmaker is there to guide the actor’s performance. So what advice did he have for Hayek in preparing for this unusual role?

“The job of a director is to take the pressure off away from an actor and to just make them feel safe to try anything… that it's ok. I encourage her to let herself just be present and let it be emotional or not.”

The actor is not alone says Arteta in channeling those emotions into a film like BEATRIZ AT DINNER. He wanted to capture her authentic emotions not through action or words but through an “internal performance.” He placed the camera in an extreme close-up on her face to capture those moments behind the eyes. He recounts a funny story in which he told Hayek to show less emotion but when she went blank for the scene, he worked with her to find the right balance.

“Well, what is it?” she asked Arteta. “It's riding that thin line of like being very present and almost letting your eyes do the speaking,” he countered.

He was very happy with the outcome and he feels she exposed herself unlike she has before.

“She put her heart on the line. She shared her art with us and I'm very proud of her.”

Arteta is very proud of the film, and he hopes more people will be exposed to BEATRIZ AT DINNER with the Blu-ray, DVD and Digital HD release.