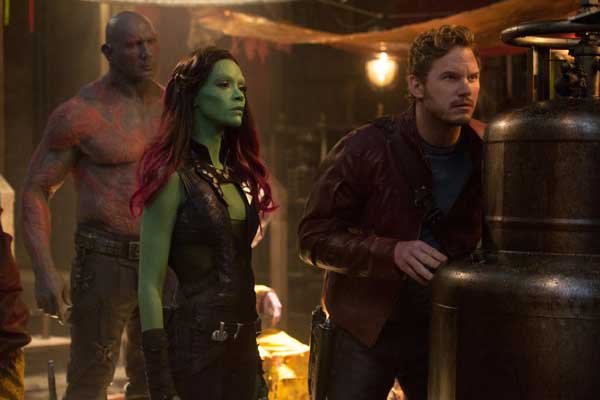 As Kermit says, its not easy being green, but at least he didn’t endure the body makeup that the actors of GUARDIANS OF THE GALAXY went through. Special effects makeup designer David White clues us in on the secrets behind transforming Zoe Saldana, David Bautista, Michael Rooker and Karen Gillan into colorful aliens.

Zoe Saldana, David Bautista, Michael Rooker ("The Walking Dead") and Karen Gillan ("Doctor Who") sat in the makeup chairs for hours to become the intergalactic heroes in Marvel’s GUARDIANS OF THE GALAXY. The special effects makeup team applied color to their skin and gave each their defining look with prosthetics. The special effects makeup effects department did an approximate total of 1250 prosthetic makeup applications on the cast of GUARDIANS OF THE GALAXY.

David White and his team created the looks for Gamora (Saldana), Drax (Bautista), Nebula (Gillan), Yondu (Rooker) and Korath (Djimon Hounsou) with prosthetics and makeup. In preproduction, head and body casts of the actors were taken for molding and sculpting. Director James Gunn tasked the team with “pretty funky” ideas for the aliens, but they had to be realistic and not silly, according to White.

“The color palette James is using is pretty extreme, and it was challenging making the colors believable while turning people into humanoid aliens.” 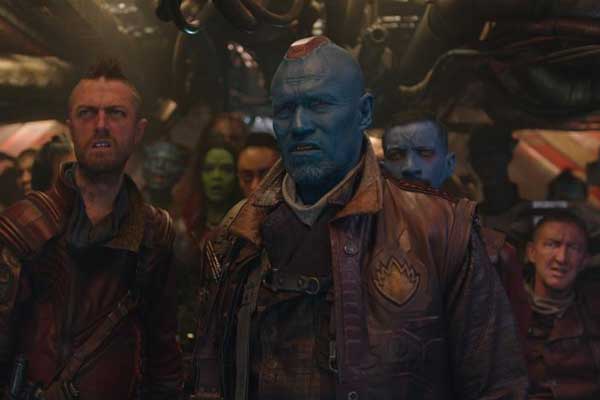 Makeup and hair designer Elizabeth Yianni-Georgiou developed a spray-on makeup for the different alien races whose skin color varied. After many trial-and-errors, the team found a solution that wouldn’t smudge when the characters were in action. David White tells CineMovie the body makeup was a durable paint base applied in two to three different layers built up with a final sealant spray on top of that. In addition, they used Mac base, skin illustrator and Makeup Inzs as products in the process. It sounds like the process of an auto body paint job.

As Gamora, Saldana had minimal prosthetics with enhanced cheeks and forehead in addition to biomechanical lines drawn into her green skin. The most difficult part for Gamora was the skin coloring.

“It took a while getting Gamora, especially getting that green skin color right.”

It took five hours for a team of four to five to apply Drax’s makeup and prosthetics daily which consisted of 18 pieces of prosthetics for the body and face. Drax’s grey body and red tattoos which were scarring were achieved with a full body cast that was molded and sculpted into individual pieces which were then applied individually over his face, torso and arms. 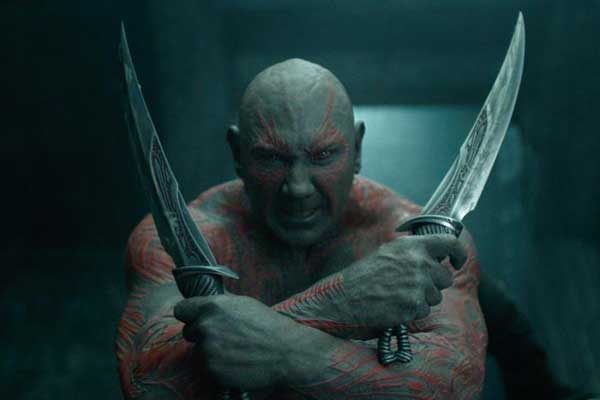 Karen Gillam’s time in the makeup chair was equal to Bautista’s but she wore less prosthetics with only seven pieces. The "Doctor Who" actress, however, had to shave her head for the role as Nebula. White explains why it was best working with a blank slate for her head:

“We needed to shave Karen Gillan’s head to get as close to her skull as we could to make it look really slick. Her look is so unique because she’s so angular and streamlined, and her color is so blue and so vivid and lovely as well.”

Who had to endure the most during the special effects makeup? David White says Nebula (Gillam) is up on the top 3 when it came to difficulty in applying prosthetics. 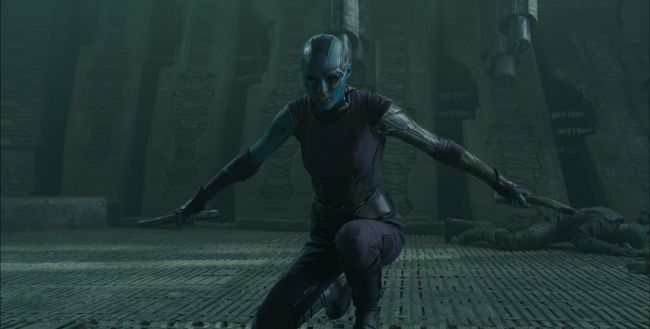 White’s department not only had to makeup the main actors, but their doubles and alien extras as well. Over 2000 humanoid alien molds were created and pre-colored to each race which included the additional colors of yellow and pink.

The special effects makeup team had their hands full on this intergalactic adventure, but it seems to have payed off with GUARDIANS OF THE GALAXY with great reviews for the Marvel film, and taking in $94 million opening weekend.

GUARDIANS OF THE GALAXY is now playing in movie theaters.