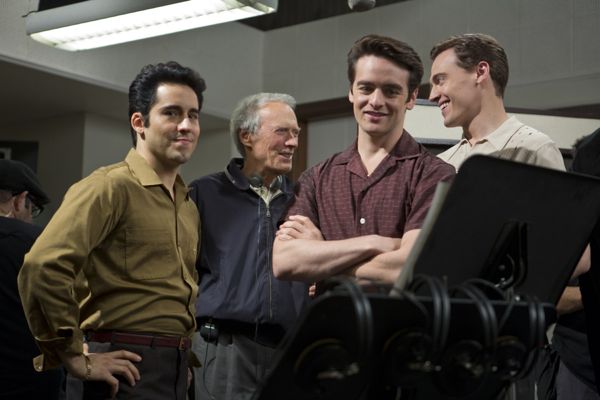 Clint Eastwood usually stars in movies he directs, but he stayed off screen in the JERSEY BOYS movie except for an unplanned cameo. The JERSEY BOYS director says he's not a fan of those "Hitchcock moments." Don't tell Stan Lee.

Set in the 1960s, it's drawn from the band's real life journey from struggling street performers to beloved hit makers. The film's cast is largely made up of theater performers, many of whom starred in the stage production of the heartfelt story.

At the New York press conference for the film, Eastwood and the cast, along with screenwriter Marshall Brickman, discussed the screen version of the Tony-winning hit and working on the "ego-free" set.

What were some of the main challenges of adapting the play for the screen?
Eastwood: It was a pleasant challenge because by using the original people, I worked with the actors who had a great influence on the play through its run. It’s a wonderful play and had a lot of excitement. I tried to approach it more from a realistic angle. There’s a lot of things that you can do in a movie that you can’t do onstage. I just tried to open it up and give it a certain realism.

Brickman: What we tried to do in the screenplay was deepen it a little bit.  A 2½-minute song on the stage, in performance, will hold with an audience, because there’s something mystical and wonderful about being in the room with the actual live performers. On film, that doesn’t work as well. So you’re dependent on a certain kind of invention and a brilliant director to keep the thing moving along.

What Clint did was to put the story a little more in front, because the story is really everything in a movie.

You technically make a cameo in the film. Whose idea was that?

Eastwood: You're talking about my Hitchcock moment. That was actually Erich's suggestion. We were sitting there talking about doing the scene where he is going to be sitting there, watching television, when this woman walks into the room and he said, 'I'd be sitting there watching "Rawhide." And I started thinking, 'Yeah, could be.' Because, after all, that was about the era, about the right timing. But, then, I put it out of my mind and somebody who works for me -- a woman who handles all of our television stuff -- just went ahead and did it. So, afterwards I just said, 'OK, I'll live with that.' But Hitchcock moments are distracting. He managed to disguise himself -- some of the time -- until he became a television star later on.

Can you relate to the struggle that the group went through in their early days?
Eastwood: Yeah, it was about the same time. Around 1959-60, "Rawhide" was my first break after years of doing bit parts and unappealing roles. So, it was a chance to gain a lot of experience and spend five or six years with various directors before Sergio [Leone] and [Don] Siegel, and all of those guys.

Could you talk a little bit about the difficult surroundings the group overcame?
Bergen: What mainly interested me was how these semi-juvenile delinquents, who didn't grow up under the best of circumstances, made it big. They were living on the periphery of the mob, pulling off petty crimes and what have you. Some had even done jail time. Then the music came and pulled them out. It gave them something to strive for. 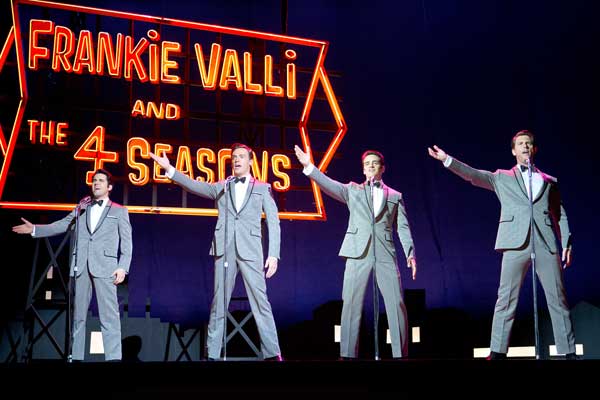 Were you a fan of Frankie Valli?
Eastwood: I was a fan of the Four Seasons. I thought their music was far superior. I think "Can't Take My Eyes Off of You" is one of the classic songs of that era and a classic song during any time in history. All of there stuff is very energetic and fun.

How did you become involved with the film?
Lomenda: It was towards the end of the [National Tour] run and Mr. Eastwood showed up in the lobby one day unannounced and I didn't believe it was true. It wasn't until the second act when I was in my dressing room in my underwear and I got a text from one of our swings who had taken a picture with Mr. Eastwood and that's when it became true. I thought the movie had been cast and as a Canadian with minimal TV and film experience it was a little bit off my radar. I didn't expect to get a call three weeks later to audition in New York. I flew there the next morning and it was pouring rain and I stood in Columbus Circle trying to catch a cab for 45 minutes and I arrived to the audition soaked after a $140 cab ride.

In that cab ride, I was sitting there soaked thinking, 'I should just get out of this cab. I should just go.' And something, I don't know what it was, told me, 'You should just go.' Finally, I got there after being a half hour late and I just looked at myself in the bathroom mirror and said, 'You've got this. You've got over 1,200 performances under your belt. At least you should feel confident in that.

About a month after that I got a call that I had booked the film.

Lloyd: I was in the original cast and had been invited back to do the role on Broadway in 2012 and 2013. During that return to the stage, I caught wind that Mr. Eastwood was directing the movie and was going around to different companies around the country.

[During one performance] I was about to start work and we heard that there was a standing ovation in the audience because they had seen Clint Eastwood walk in. Afterward, I met him onstage, said hellos … and the next time I saw him was a month later on the set.

Bergen: I hadn't done the show in about three years. It was one of those things that I heard about and thought, 'I'll buy tickets along with everybody else.'

I initially auditioned for a different version [of the project]. The casting director called my agent and said, 'He's not really right for the role,' which I'd played for four years, so I'm glad that version didn't happen. And then it ended up in the proper hands and with the right writers and the right team for this, and I went on an audition. It was one audition, no callback, and about a month later I got the phone call. 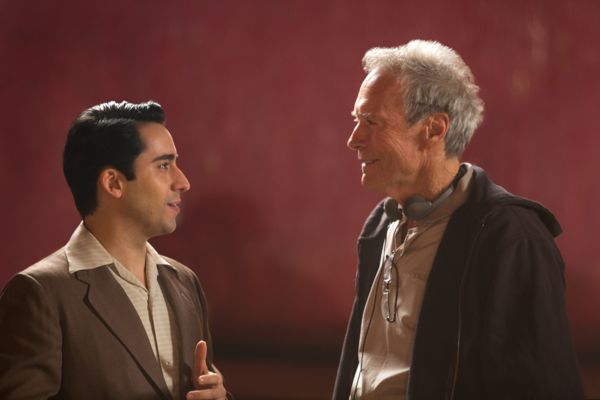 Do you recall your first meeting with Eastwood on set?
Bergen: The four of us were looking at ourselves trying to match everything up, and all of a sudden, in the mirror, we see Clint walking behind us and we think, 'Should we stop? Should we say hello?' There was no formal meet and greet.

Piazza: For a while, Mr. Eastwood was the man behind the curtain. Most of us had signed on to the project without meeting him. I remember we were in the room and eight men were trying to teach me how to dance and I turned and shook his hand. Two days later, we were shooting the film.

What was the atmosphere like during filming?
Bergen: When you walk onto a Clint Eastwood set, there’s no ego there. There’s respect for everyone, from the actors to the catering truck. The ego-free nature of that set teaches me that if you have the talent, everything else is unimportant.

I hadn't heard any stories, other than he likes to do two takes and that's it. And he was so kind and calm and everyone respects him so much and it's not an ego thing. He wants to see your first instinct as an actor. Now, if you're really off, he'll guide you in a different direction, but he's so interested to see what you do. In fact, his strongest direction with me was giving me the confidence to trust that what I was doing was already enough. He said, 'You're here because of the work that you did. Just live in it. Just be in this world.'

Young: He made us feel very comfortable. He feels like an older brother. He feels like a friend, but he's definitely the boss, and a lot of his crew have been with him for 20 years. Some of them come out of retirement just to do the next Clint Eastwood movie. They all call him 'Boss.' He's revered, and he deserves it.

How was it different for you performing the role on film versus the stage?

Young: The tragedies that Frankie has in his life, you go through them with him in a more immediate way on film than you do onstage. There’s something about film that makes certain emotions and psychological subtleties more immediate and relatable than they are onstage.

"Les Miz" gave the actors an earpiece and they sang to a piano that they heard and then they put the orchestra in later, but Clint had everything live — live band onstage, though sometimes they weren't period, so they had to be hidden. But it was really important for Clint to capture live performance energy, and I think that's why he cast people from the stage production.

What about the choice to include a dance number during the end credits?

Bergen: It's an odd choice, but I think it worked. Some may call it cheesy, and I love it. I think it's fun. I just hope that people with this film can like chill out a little bit and like all the different choices — the talking directly to camera, our finale number, things like that. What we're trying to do is honor the show, which has been loved by so many, and also put it in this new way, so I hope people just take it and have a good time.