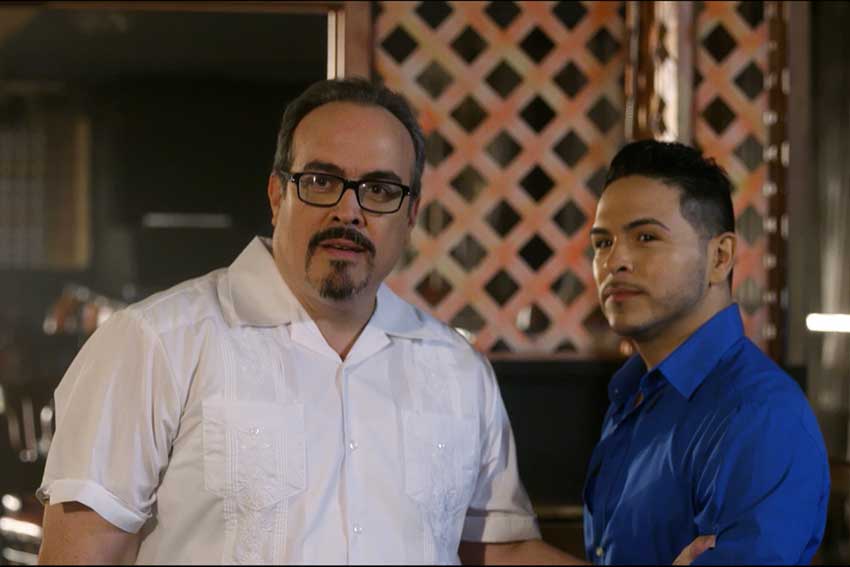 Actor David Zayas ("Dexter," "Gotham," “Blue Bloods”) doesn’t need to work in indie films, but SHINE has special meaning for the Bronx native. CineMovie talks to David about how the Latino community rallied to bring SHINE to the big screen.

Directed by first-time feature filmmaker Anthony Nardolillo, salsa brings a community together in the face of tragedy and gentrification. Two Puerto Rican-American brothers who's hopes, dreams and struggles with love and loss land them on opposing sides of the gentrification line when a big outside developer vies to buyout their block in Spanish Harlem, which includes their late father's dance studio where they first discovered their lifelong passion for the steps and sounds of Salsa.

Starring David Zayas and world renowned dancers Jorge Burgos and Gilbert Saldivar. It is one of the fastest funded KICKSTARTER for a Latino film. The film is about community, shot in the community, and even funded by the community. It not only reminds of our heritage, but reminds us why its important and how gentrification is an important topic. SHINE comes to select theaters nationwide on October 5 .

David talks about the film and his career in our Q&A below.

CineMovie: What a great behind the scenes story for this movie. It started as a kickstarter campaign. The community was involved. How did you come to know about this project?

David: I wasn't involved in the beginning, but I, I got the script from my agents and I read it and I saw right away I saw the the love that was in the script and the positive imagery of Spanish Harlem and the whole story of family and how close we are and how we hold onto our culture. So I immediately wanted to do it and then when I, when I decided I like to do it, I went to the set and everyone just cared about it so much and that doesn't happen all the time. So I met director Tony Nardolillo. and he was just so passionate and I felt positive about the movie and everybody just wanted to be there. And it was a beautiful story and I immediately, was like, 'I'm so glad I did this.'

CineMovie: Where did you shoot?

David: I shot in New York. I shot in in the Bronx and I shot in Spanish Harlem.

CineMovie: So how great was it to go back to your roots? You're from the Bronx, right?

David: It was. It was funny because you go in and start shooting and the script then and you're like, 'oh, I'm right at home here.' This feels like how I grew up. I grew up in the Bronx and my family at how connected they were to music and all my older cousins used to go out and go to salsa clubs. It's just brought back really great memories. And also, it just reinforced the fact of how special and how passionate and how committed to family that my family was and how the neighborhood was and it was great.

CineMovie: So how do you see this gentrification from your aspect. Do you think it's a bad thing? Is there a happy medium?

David: Well, you know what, first of all, it's a mistake to make things black and white. Here's what I am going to say is that on the surface it looks like, 'oh, it's great, and the building condos and in Spanish Harlem, they're building these business is, they did all these nice fancy places but new people are moving in. But what's happening is all the places that going shooting up the neighborhood people can't really afford that change. It's all economic. And so, I'm not going to say it's a bad thing, but it ain't a good thing for some of the neighborhoods that maybe cannot afford that change. And it's something that should be considered, not always considered, but it should be considered. There's gotta be some kind of balance out there. I'm all for moving forward and making things better, but there's gotta be a balance. There's gotta be a balance that is more social than it is greed, and that's, that's how I feel about it.

CineMovie: Gentrification is a big topic in movies. There was BLINDSPOTTING, SORRY TO BOTHER YOU and "Vida" on Starz...

David: Different places in the United States, San Francisco, Los Angeles, Texas, this is happening everywhere on different levels, but it's happening everywhere. And it's something that we need to get on that train so that we can be go right along. And that is the challenge these days. I think.

CineMovie: Yeah. Hopefully it turns out well for everybody. So you get to play some conga drums. Did you have any prior experience? Did you have to learn for this movie?

David: I had no prior experience. I went for two weeks, got lessons to play the congas. And then I went back when we did the scenes. It's one of the most difficult things I've done but it was a great challenge. It was great. I was up for it. I look forward to see it.

CineMovie: And since you were a NYPD officer, how do you think the area has changed?

David: Oh, that was NYPD from 86 to 2000. And firsthand, I saw the effects in the mid nineties when things started to change, particularly in Times Square. It's mixed. I have mixed feelings about it and in my career I had a very good career. It was an opportunity for me to help people, help people in neighborhoods where I grew up the same way I grew up and I understood all the situations. So it gave me a lot more patients than someone who's not from the city. I learned a lot. I learned a lot about characterizations of people and how to figure them out when I get to a scene and that all helps in the acting. I remember everything. I clocked everything. There was a change happening. I clocked it. I didn't let it go. It's something that I'm going to need to know years to come. And I was right.

CineMovie: Yeah. That's a good experience to have as an actor.

CineMovie: How was your salsa dancing skills?

David: I'm not as good as these young man. I grew up dancing salsa so I know.

CineMovie: Your character tells his young sons to never forget where you came from. So as a Latino and coming from the Bronx, how do you stay true to your roots?

David: Well, I live in the Bronx. I'm from the Bronx, I have family. All my family's in the Bronxs. I support as much as I can within the Bronx. We have a grateful president, Ruben Diaz and I stay close to where I grew up.

CineMovie: What else do you have coming up?

David: I'm going back and forth to New Orleans. I'm shooting a film called BODY CAM, and I'm reoccurring on "Blue Bloods" as the governor of New York, so that should be fun. And living the life of an actor and everything's got to fall into place. I've had an amazing lucky and fruitful career and I've been very happy about that.

CineMovie: It's great that you're playing a governor on "Blue Bloods." It's kind of cool, right when we see Latinos acting as presidents and governors?

David: Absolutely. Yeah. No, listen. I’ve tried to be conscious about the roles that I play to try and keep it in a positive upward momentum. Sometimes it doesn't always fall into place, but I'm aware of it and I sometimes the choices I make are based on how representation is being shown in the project and I’m always on top of that. So that’s kind of important to me.

CineMovie: And speaking of that, I was watching the movie PEPPERMINT with Jennifer Garner last week. I don't know if you're familiar with the film.

David: I haven't seen it.

CineMovie: In the movie they have drug dealers and it's your typical Latino stereotype. So I was thinking to myself, can actors refuse those kinds of roles or is it just too hard for young actors who want to make it in Hollywood?

David: I don't judge anybody for whatever they choose. Sometimes it's difficult for a young actor, but if you get to a position where you can kind of maneuver that then I feel that and I know a lot of wonderful actors that have done that. It doesn't really matter to me what we play. It only matters to me how it's written. It only matters to me what's going on. The guy could be a pimp, a drug dealer, a priest, a governor, and Latinos can be all of that. And how you write it and the essence of that character is what determines the representation of that culture.

CineMovie: Yes! It’s all in the writing.