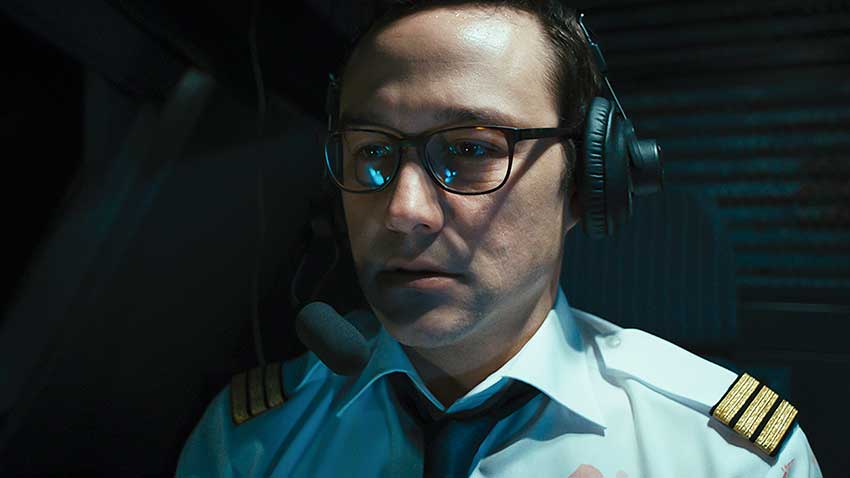 Joseph Gordon-Levitt stars in the hijacking thriller, 7500 by first time feature film director Patrick Vollrath. Shot entirely on a decommissioned Airbus A320, the Oscar nominated director took an experimental approach to the thriller with improvised camera movements and dialogue in 20 to 30 minute takes.

The German director's breakthrough short film, EVERYTHING WILL BE OKAY was a critical hit at 2015’s Cannes Film Festival and in 2016, Hollywood came calling when it was nominated for an Oscar© in the live-action short category. He started writing 7500 afterwards when various producers approached him.

Funded outside of Hollywood with German and Austrian governments financing 7500, Vollrath decided his unconventional approach in making EVERYTHING WILL BE OKAY would carry over to his feature film debut. In 7500, he also encouraged the actors to improvise along with fluid camera movements by cinematographer Sebastian Thaler (FALLING, UGLY).

7500 is code alerting air traffic control of a hijacking. Shortly after takeoff on Berlin to Paris flight, terrorists storm the cockpit injuring Tobias (Gordon-Levitt), a young American co-pilot, and killing the pilot. He fends off the attackers but he’s forced to watch as passenger’s lives are threatened, including his girlfriend attendant, if he doesn’t open the door.

While the synopsis suggest an action-thriller, Tobias doesn’t spring into action like Samuel L. Jackson in SNAKES ON A PLANE. Instead, Tobias fights for his life and those passengers by following protocol while remaining locked in the cockpit.

Director and writer Patrick Vollrath tells CineMovie he wasn’t looking to make a Hollywood-style thriller with big action scenes. He wanted a realistic examination of an ordinary man thrust into a life or death situation.

Joseph Gordon-Levitt, with his boyish-looks, was the perfect choice to play the everyman. Vollrath jokes about that cute kid from the 90s NBC sitcom.

“Everyone remembers Joseph as that kid from ‘3rd Rock From The Sun,’ and in our mind, he’s still that kid with that boyish face,” says the director.

Vollrath explained to the 39-year-old actor his unconventional style of shooting with long takes and improvisational dialogue, and after watching Vollrath’s Oscar-nominated short, Gordon-Levitt signed on.

“He told me he wanted a new challenge, and he wasn’t used to it [improvising] so it was different for him.”

The hijacking storyline is nothing new but the German director wanted to humanize one of the hijackers, Vedat, a teen boy who Tobias reaches out to on a personal level.

Vollrath was influenced to make 7500 after seeing a news story about a young German Muslim who traveled to Syria to join ISIS for the cause but later regretted it when he wasn’t able to go through with it. While many will criticize stereotyping Muslims once again as terrorists, his intention was to shed a different light on the subject.

“I wanted to show the humanity of this kid who was in over his head,” says Vollrath. "The kid can’t bring himself to kill. No one had really done that before.”

Adding to the tension of the action was the claustrophobic setting of a cockpit. In close quarter sets, a production crew will build it out with moving walls that will accommodate the cameras. Vollrath didn’t want to cheat it so he found a decommissioned Airbus A320 airliner.

"In other movies, a cockpit looks much bigger than it actually is so I wanted to keep the confined space setting with an actual plane.”

When CineMovie inquires whether it was a tough shoot given the long takes and claustrophobic setting, the filmmaker laughs it off.

“Not for me, but it was exhausting for the actors.”

No doubt shooting 20 to 40 minute takes while improvising sounds like an arduous task for actors, but Vollrath says he encouraged the actors to use their emotions to propel the scenes forward instead of relying on a script. While a script did exist, it was a bare bones outline but the actors had full control.

“For me, it’s not really important exactly what you say or even what you do, it’s more about the emotion underneath it,” says the director. “Just go with your emotion, go with the character, what you think he would do, what you feel in the moment. Then we look at it and I either say, I think that’s too much, or that’s a direction I really love, can you explore that a little bit more in the next take?”

With two to three actors fighting in a cockpit, it probably wasn’t easy for the cinematographer tucked in a corner with a camera. Vollrath tells us they used a digital camera, the ultralight Arri Alexa Mini.  Sounds like the cinematographer needed an additional skill - the skill to twist up like a pretzel.

7500 accomplishes what Patrick Vollrath set out to do - create anxiety not just with the action but with the claustrophobic setting.