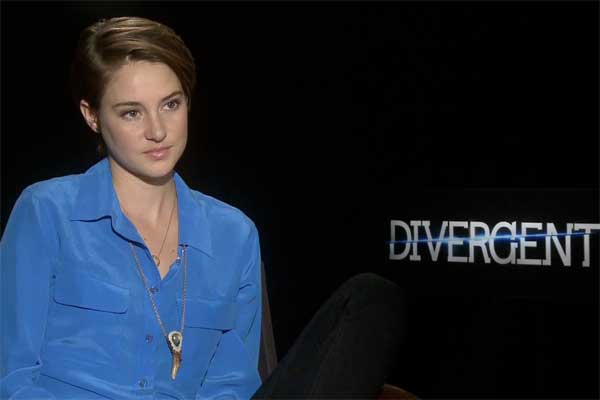 Shailene Woodley is the next big thing with DIVERGENT launching her into the limelight. The former ABC Family star is starring as the heroine Tris in the novel to film adaptation, and the DIVERGENT star is opening up about taking on the life-changing role, getting beat up by Theo James and working with Kate Winslet in this 12-minute video interview.

Shailene Woodley says she's been acting since the age of 5, and going on 17 years in her career. She first came to attention on the controversial ABC Family television show, "The Secret Life of an American Teenager," but it was her critically acclaimed role as George Clooney's daughter in The Descendants (2011) that got the ball rolling for the big time. Since then, she's managed to avoid the Disney curse and become an actress to watch for with indie roles that have cemented her status as a serious actress.

At a press conference for DIVERGENT in Los Angeles, the charming and genuinely nice 22 year-old revealed she emailed Jennifer Lawrence for advice before taking on a role that would catapult her into teen fandom much like Hunger Games did for Lawrence. Lawrence was supportive and offered her some common sense advice.

Woodley also offered up some interesting facts about herself. If stranded on a remote island or living in dystopian society like DIVERGENT, she would be the person you want to be around. By the sound of it, Woodley's got some mad skills as a survivalist. She studied indigenous cultures and their ways of healing themselves using natural elements. She also studied herbalism so that she can be familiar with editable plants in the wild. However, she soon realized after Hurricane Katrina that those skills probably wouldn't come in handy in the urban setting so she studied urban survival skills. That's just one hobby she's picked up on her spare time.

Also in the interview, Woodley talks about one of her favorite scenes to shoot on top of a ferris wheel. While she's usually afraid of heights, climbing thousands of feet into the air didn't have her shaking in her pants since she and Theo James were strapped in with cables. The coolest part, according to the DIVERGENT star was climbing the Navy Pier Ferris Wheel with her co-star Theo James during a full moon. The not so fun part was the weather which was a chilly twenty degrees.

Watch more of Shailene Woodley's interview and why she's calling Kate Winslet a "citizen of the set."