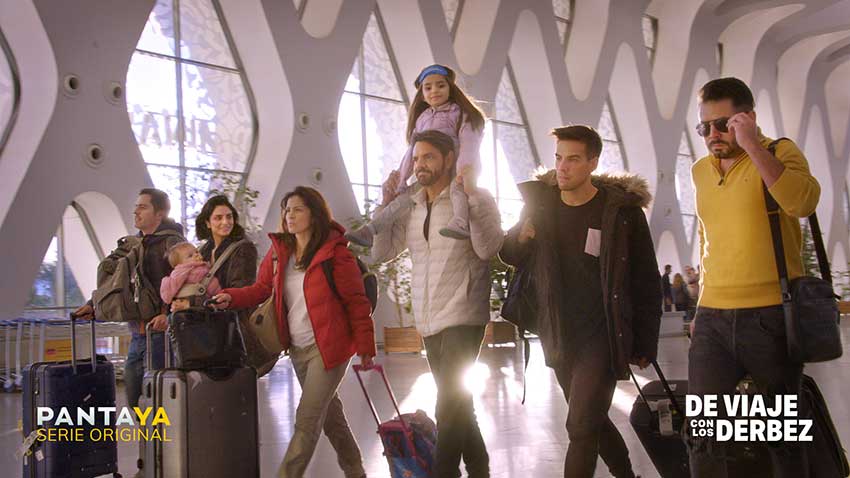 If you follow the Derbez family on social media, you probably think they have the perfect life and relationships. In a new reality series, "De viaje con los Derbez," now streaming on Pantaya, viewers will get to see that the Derbez' are just like any other dysfunctional family. Eugenio Derbez, his wife, young daughter and his four adult children with their families documented their month-long vacation in Morocco, but it wasn't all fun and play, according to Mexico's famous family who gathered together again at a press conference Monday.

Anyone who's traveled with their families knows relationships are tested when trapped together for days so you could imagine a whole month. Eugenio, his wife Alessandra, their 5-year-old daughter Aitana, his adult children Vadhir, José Eduardo, and Aislinn along with her husband Mauricio Ochman, and their 1-year-old daughter Kailani, packed up their bags for a family adventure documented for a half-hour 8-episode Spanish series.

"Imagine a family dinner that lasts one month, you end up poking your eyes out. That's what happened a bit here," says the famous father of four of their experience in Morocco.

Derbez describes his family dynamic as typical of any family unit.

"It’s family like any other. Essentially we’re a totally dysfunctional family but typical.”

The idea came to Eugenio after being away for five months shooting the movie adaptation of the Dora the Explorer movie in Australia. The Mexican star felt he had neglected his family while away. Ever since he came to Hollywood, he promised himself he would be a more present father to his adult children after getting a second chance five years ago with the birth of his daughter with wife Alessandra Rosaldo, but his career once again got in the way.

"Before coming here, I said to myself, 'life is giving me a second chance with Aitana," says the 58-year-old. "'I'm going to be a better father and I'm going to have more time for my family.' Of course when that happened Hollywood came at the same time as Aitana. It's like life saying, 'Oh, yeah! You're going to commit more time with your family, we'll see. There's your dream, let's see if you're going to be focused.'"

Derbez thought a month-long family excursion would bring everyone closer together. However, coming together at the same time is no easy task. "To get us together is a circus", says the father of four.

Mission accomplished. During the trip, they got to know each other on a much deeper level. While the family often gathered for dinners, the talk was always superficial until this experience.

"I found out things about my kids that I didn't know," says Eugenio. "They told me things they had never told me. These profound talks led to tears, of course."

While everyone was hesitant about cameras following them around for a month, Pantaya agreed not to air the show if they were not comfortable with the final product. Derbez admits it took months to decide whether the edited series should go on the air. They're still weary of viewers seeing their not-so-proud moments but they promise viewers will have a blast.

Derbez insisted the show not be scripted, and no cell phones on the trip. He personally chose Morocco because he says he wanted an adventure in a foreign land. The family stayed together in a presidential suite with bedrooms for each couple and the two bachelors of the group with a common dining area.

Alessandra and Aislynn admit the adventure was very stressful as mothers to young daughters. Aislynn reveals you may see the grumpy side of her on the show since she was deprived of sleep the entire time. Alessandra, however, enjoyed watching her 5-year-old bond with all her siblings at the same time but most of all watching her daughter care for her 1-year-old niece Kailani (Kai for short). Living together in one suite cemented her child's relationship with all her siblings.

"For me, that made the trip all worth it," says Alessandrda. "It was precious."

While the women in the family say they would never take cameras on the road again, the single brothers Vadhir and José Eduardo joke they would double them. They had a blast during this family vacation.

Ultimately, the problems they experienced made them stronger as a family and they learned a lot more about each other.

Luckily the show didn't change that.

While the show is now streaming on Pantaya, he says he's still making amends for his absence from his older children's lives.

"Since Aitana, I've been trying to be a better version of a father not just for Aitana but for them. A bit late, I know. But it's never late but I'm trying to recuperate that time and be with them... all of my children."