Interview: 6 Things Guillermo del Toro Revealed About The Making of 'The Shape of Water' 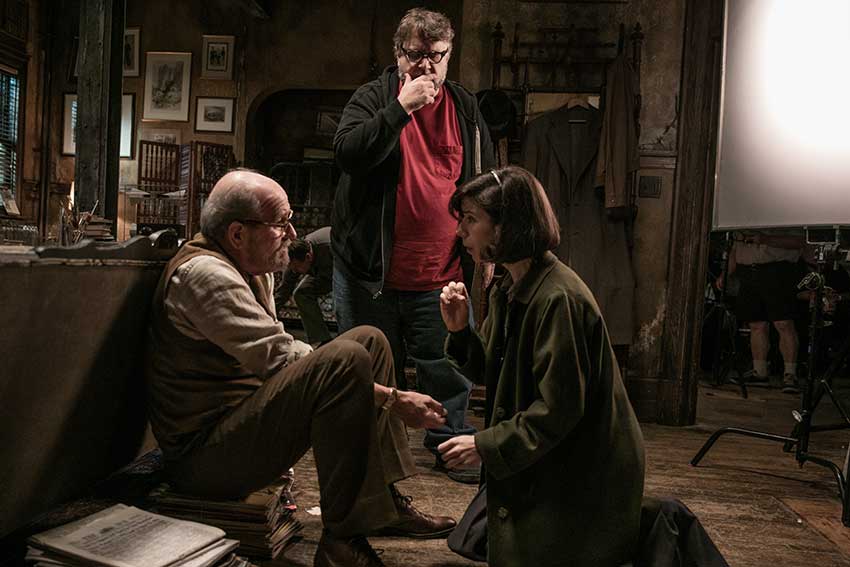 Director Guillermo del Toro’s (HELLBOY, PAN’S LABYRINTH) fascination with monsters has come full circle with THE SHAPE OF WATER. The Mexican-native’s filmmography has led to what he calls his most prized project with THE SHAPE OF WATER. Here’s what he reveals about his journey in bringing a very personal film to the big screen. Listen to the interview below.

THE SHAPE OF WATER is a fantasy film, starring Sally Hawkins, Octavia Spencer, Michael Shannon and Richard Jenkins, set against the Cold War era circa 1962.  Elisa (Hawkins), a mute and lonely woman, works as a janitor in a high-security government laboratory with her friend Zelda (Octavia Spencer). Her life is changed when they discover a classified experiment in the shape of a creature. Elisa must save this fish-like creature from a monster of a human kind -  government agent Strickland (Michael Shannon).

The concept behind THE SHAPE OF WATER is no easy pitch to make especially when the leading lady and another major character are mute. “The movies I do are not easy to pitch,” del Toro tells CineMovie.  When he pitched the idea to Fox Searchlight, he went in with a model of the creature, models of the set, an excerpt from the screenplay, and a beat sheet with the whole structure. The director and co-writer wanted to show visuals so the studio could imagine how a creature would be attractive to the leading lady. He fully funded those early models and visuals.

The origins of the story came from a friend who pitched the idea of a love story between a woman and a fish. He bought the rights to the idea. The concept reminded him of the classic horror film, CREATURE FROM THE BLACK LAGOON (1954) in which you see the beginnings of a love story between the swamp thing and the leading lady. The filmmaker recalls rooting for the creature. “The creature was more interesting than the humans,” said del Toro.

As in most creature features, the humans are often the monsters of the story who attack something or someone they don’t understand or fear. Unfortunately that can be said of the times we're living in today.

“For the last decade, as an immigrant, you feel the tension in the air about division,” says del Toro. It’s now manifest but it’s been brewing for decades if not more. Right now, aside from immigration, we’re in a place in our culture, hatred and fear is part of the discourse for everything.”

THE SHAPE OF WATER may be set during the backdrop of the Cold War which was a time of mass hysteria and fear propagated by politicians, but it's truly reflective of today's society.

Since MIMIC (1997), Guillermo del Toro says he’s had full creative freedom, but in order to make THE SHAPE OF WATER, he sought out a studio that would continue to honor his vision. He tells CineMovie the reason he went with FOX Searchlight was through a recommendation by his friend and four-time Academy Award winning-filmmaker Alejandro Gonzales Iñarritu who worked with the studio on BIRDMAN (2014).

Guillermo del Toro describes himself as an avid lover of cinema since he was a child. During the interview, he recalls going to the movie theater with his family. Those movies shaped him into the filmmaker he is today, and each of one of his films is a personal journey. “Movies have saved my life in my biography,” he says of his filmography. He adds that all his movies led him to THE SHAPE OF WATER.

The character of Elisa in THE SHAPE OF WATER revolves around cinema and her love of classic movies. She lives above a 24 hour movie theater. We think there may be a bit of del Toro in Elisa.

You may want to skip this part since it gives away part of the ending.

*************
Elisa has scars around her neck. In the end of the story, they serve a purpose. Guillermo del Toro reveals the idea of the ending came from Sally Hawkins who plays Elisa. Sally Hawkins was writing a story of a woman who transforms into another being. He liked the idea and said, “That’s the ending of the movie.”

THE SHAPE OF WATER is now playing in select theaters, and expands December 8.