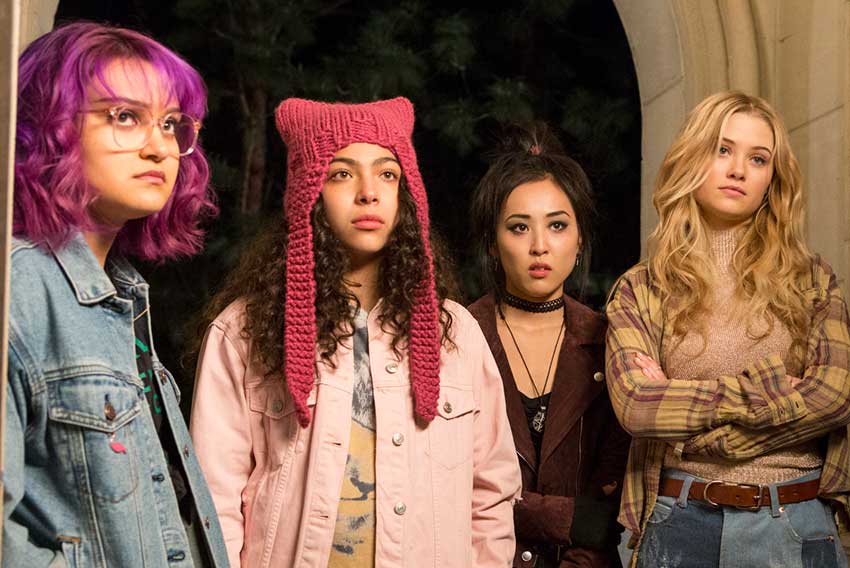 Marvel's teen superheroes the Runaways are coming to Hulu on November 21, and we're talking to two of the stars, Allegra Acosta and Ariela Barer about their superpowers and what to expect from the new show. Watch the interview below.

Texas native Allegra Acosta and Ariela Barer play two of the runaways fighting their evil parents. Ariela plays the comic book's Gert Yorkes, 16, a fast-talking and quick-witted teen never afraid to speak her mind and stand up for what she thinks is right. Allegra Acosta is her strong-willed sister Molly Hernandez who was originally named Molly Hayes in the Marvel comic books, but for the Hulu show, Molly is now a Latina. Allegra talks about the importance of representing a young Latina and playing a positive role model.

The actresses tell us what to expect from the show and how it's different than other shows.

More about the up-and-coming actresses:

ALLEGRA ACOSTA / MOLLY HERNANDEZ
Allegra Acosta plays “Molly Hernandez” in the Hulu/Marvel series Marvel’s Runaways. She was born in El Paso Texas, and started singing and acting professionally at the age of nine when her family moved to Los Angeles. Allegra had a recurring role in Nickelodeon’s "100 Things to do Before High School" and guest starred on "Just Add Magic" on Amazon. She is also on a competitive dance team and is an emerging singer. Allegra’s other passions are animals. She and younger sister, Valentina, recently adopted two dogs from a shelter.

ARIELA BARER / GERT YORKES
Ariela began her career at the age of ten when her manager discovered she and her sister in a play at a local children’s theater group. Since then she has appeared in shows and movies including New Girl,K.C. Undercover, Modern Family,and in recurring roles on Netflix series "One Day at a Time" and "Atypical." Outside of acting, Ariela plays bass in the feminist rock band The Love-Inns.