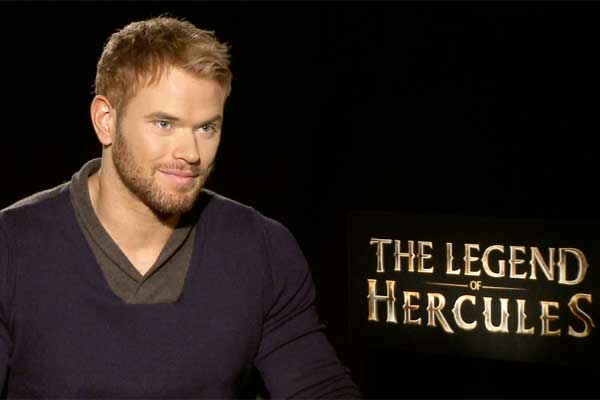 Kellan Lutz mastered the muscles to play Hercules, but getting down the faces during the fight sequences were more troublesome. Lutz is also revealing why Sylvester Stallone asked him to downsize for The Expendables 3.

Kellan Lutz plays the demi-god Zeus in the Renny Harlin action adventure film, THE LEGEND OF HERCULES. CineMovie’s Pili Montilla sat down with Kellan Lutz in Los Angeles to talk about flexing his muscles for the role.  In person, Pili noted that the actor was a lot smaller in size than his on-screen persona in which he replies that he had to tone down for his role in Sylvester Stallone’s The Expendables 3, per Rocky himself.  After wrapping THE LEGEND OF HERCULES, Lutz joined the Expendables 3 cast along with action icons like Mel Gibson. Antonio Banderas, Wesley Snipes and Harrison Ford.

In our video interview, Kellan Lutz admits that the slow motion action scenes made it harder to look cool. He couldn’t help but cringe when he was about to strike his fellow actors and stuntmen in THE LEGEND OF HERCULES with his fists or helmet. He looks to Russell Crowe (Gladiator) and Liam Neeson (Clash of the Titans) as veterans of the slow motion “cool look.”

THE LEGEND OF HERCULES star has played a few brawny characters in films such as Twilight, Immortals and in the upcoming Tarzan and Expendables sequel, but is there an ideal non-muscle bound character he would like to play that’s not all muscles.   He tells us he would love to play Angels outfielder Josh Hamilton who struggled with alcohol and drug addiction. Reading Hamilton’s account in his autobiographical book inspired the actor to hopefully play the baseball player if someone takes his story to the big screen. Pili suggested he produce the film and star in it. Lutz like the thought, “That’s a good idea.”