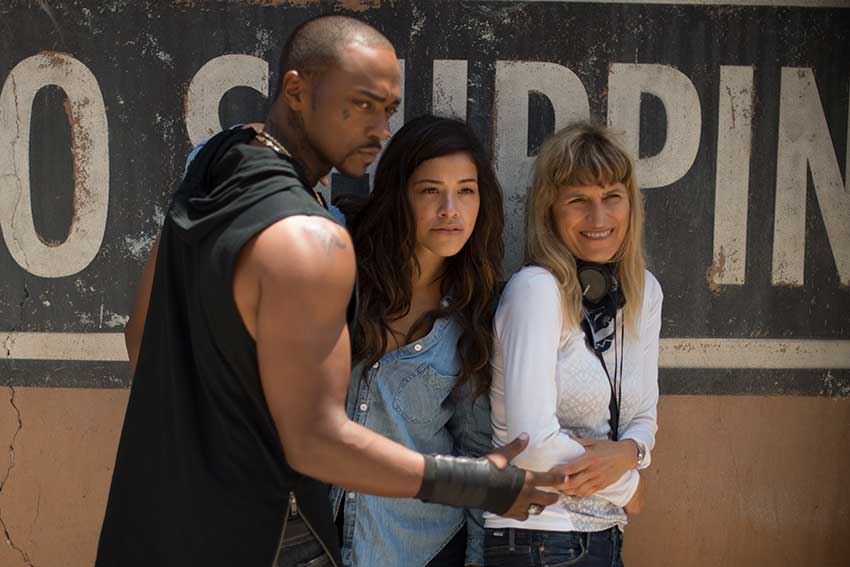 Catherine Hardwicke (TWILIGHT, THIRTEEN) is back in the action genre directing MISS BALA starring Gina Rodriguez and Anthony Mackie. It's been a while since the established director has helmed a big action flick. CineMovie sat down with the director to discuss the lack of directing projects for women specifically in the action genre. She's also talking about why growing up in a Texas border town (Cameron, TX) made her a good candidate to direct MISS BALA.

Catherine Hardwicke transitioned from a production designer to director with her critically-acclaimed 2003 film, 13 starring Evan Rachel Wood, Holly Hunter and Nikki Reed. She went on to direct LORDS OF DOGTOWN (2005) with Heath Ledger and Emile Hirsch and the blockbuster hit, TWILIGHT (2008). However, after the box office flop RED RIDING HOOD, Hardwicke seemed to disappear from the scene, and has mostly worked on occasional television shows. She describes it as "director's jail" but why don't male directors face the same challenges. We talk about that and why she was the right fit to helm MISS BALA.

Catherine: It's really important to me and the writer because Gareth had written that idea. I grew up on the Mexican border, soy de la frontera de Texas.

Catherine: Always. Border is my life. I've basically swam across the Rio Grande River about 40 times back and fourth because our farm is right on the Rio Grande river. So I guess it's almost literally in my blood, but I like that the two cultures and on border is just so fascinating when you have both influences. Of course Mexico is a much richer and older culture than we have. So I love all the beautiful things in Mexico. I went and studied art in Mexico once for the summer and traveled all over Mexico. The original movie was set all in Mexico, and pretty much all enclosed, and inspired by Miss Sinaloa situation... Since then there's been at least 10 other major stories of narco novias [brides] kind of similar to that of the Patty Hearst situation. So our writer had researched all the other ones too, and kind of put all that into it. And then I think he made it a much more interesting story by having a Mexican-American because now so many people can relate to it. How many millions of friends do we have that are either Mexican but they don't speak Spanish fluently or they're from Vietnam but they don't speak Vietnamese or they're from Thailand but they don't fit in when they go back to their own country. That's a cool identity thing to explore. That I thought was really an expansion of the original.

CineMovie: I'm glad they picked somebody who has respect for the culture and understand that duality because most people just see it as a blank slate, right? People who are not familiar with Mexican-Americans and Mexicans lump us as one, Latino.

Catherine: But also even a lot of our actors came from Mexico City but they didn't even have exactly the right accent for... because it's a giant country. So we tried to get everybody to get on the page to be more TJ [Tijuana].

CineMovie: You didn't make the mistake that "Traffic" did. The accents were all off because the cops were supposed to be from TJ [Tijuana] and Benicio del Toro and the other actor had different accents. It's a great movie, but what threw me off was that accent.

Catherine: We had an actor from TJ who sat there on the set there with us, trying to keep it right, keep it accurate. 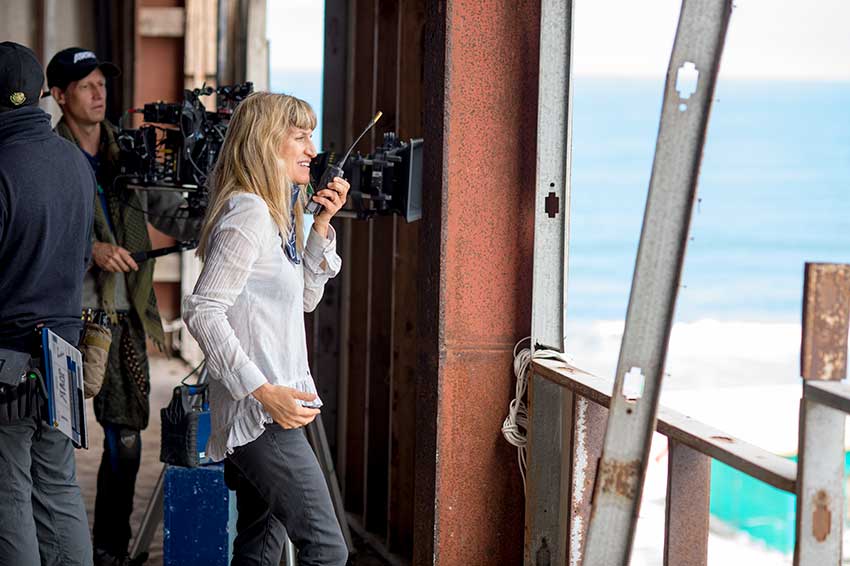 CineMovie: And I'm so glad you didn't substitute Tijuana, Mexico with another. location which is standard these days.

Catherine: The border is so important to me. To me, I really wanted to film it in the real place because that's the biggest border in the world. There's no other border like that. You see the wall actually, I don't know if you noticed, but it's in a lot of the shots. It's a fascinating place... and right now and there's a lot of cool modern architecture, interesting stuff. It's not like some dusty border town.

CineMovie: It's not a seedy border town like they always portray.

Catherine: People are scared of Tijuana. I tell people, 'Oh yeah, I lived there for five months. I only came back one day to the US.' They're like, 'what!' What's the big deal!

CineMovie: I go there a lot with the family. So how do you balance reality versus fantasy. How do balance wanting to show respect to a woman but also cater to the male perspective who are the biggest demo for this genre?

Catherine: Well, we were mostly thinking on the action, like what could she really do? This is a girl, she's 5'3, she's not trained as a navy seal and she doesn't have any fu***** super powers. So can I really do this stunt? Can Gina really do this stunt? If we couldn't really do it then she as Gloria can't do it either. So we wanted to keep it grounded like that. And then at the bullring I'm thinking, 'okay, what would she wear?' She knows she's going to have to go fight to get her friend back. She's not going to be wearing sexy little high heels. No, I'd wear my frickin' jeans and like a denim shirt because I'm going into battle. Now at the end, she decides to do this beauty queen thing so that's fine at the end. She gets all glammed up, but up until that we try to keep it pretty real. Like where would she find those clothes? Okay. What does she have? What did she pack? So we try to keep it method.

CineMovie: Yeah. Yeah. That was good. And I read that she did most of her stunts.

Catherine: She did everything except for one thing. They wouldn't let her drive through the fire explosions. Duh, Gina! What if something happens?

CineMovie: But she did want to do that.

Catherine: Oh, yeah! 'I can do that,' she said. And they were like, 'you can't.' She could've done it since nobody got hurt but you never know. 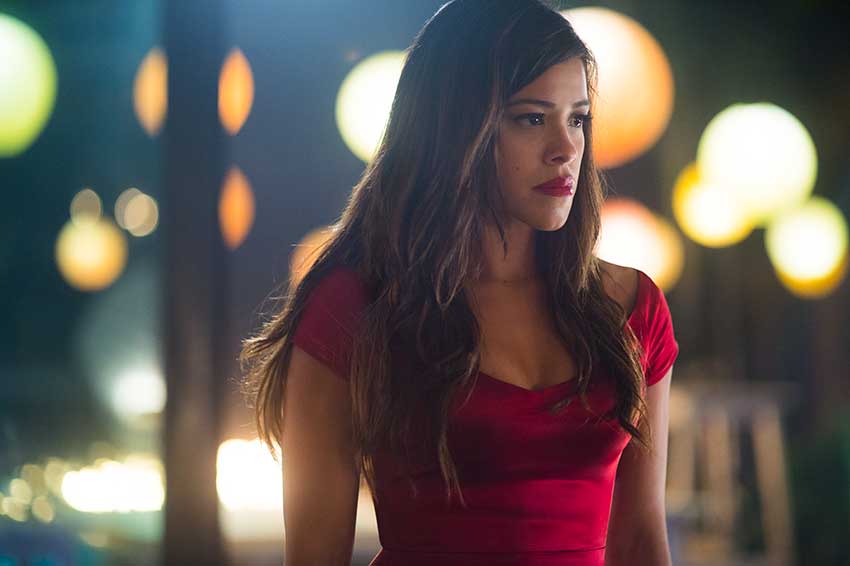 CineMovie: I heard you would talk Spanish to the crew so you were on the same page.

Catherine: Oh yeah! Well, actually a lot of the cast... everybody was having fun teaching me all the Tijuana slang, so that was kind like the running joke. How many of the Tijuana slangs could I say? So in the middle of the night, we'd be up all night long with the party scene and then they'd look at me and I'd be like 'fierro pariente.' And I hadn't ever heard that. But that's very Tijuana. 'Fierro pariente!' And that was like the rallying cry, so we would always try using those words. We were like 'let's go, people. Come on!' So I had fun. I had my little thing on my phone, like every new wild phrase like that I would ask, 'Now where can I work in ? Somebody can say that.'

CineMovie: That's cool. I can really appreciate that.

Catherine: And also we're going back and forth in the movie which is a border town because half the time I would go there and in my crappy Spanish I'd start talking to somebody and if they spoke English better than I spoke Spanish then they would just switch to English. So you were always going back and forth, whatever's easiest way to talk. So I wanted to have them both in the movie.

CineMovie: Well that's great. And I also wanted to ask you about women in Hollywood. I'm not sure if I'm wrong, but it seems there's been more of an effort to hire women behind the scenes. It's a great thing given that most of the people I've interviewed are males across the board except for actors. That's a sad fact.

Catherine: Like in this case, I wanted to hire a female editor, an African American woman who's a very good editor. So that was a little bit of a fight to get there and get them to look at all her credits. Got Ava DuVernay to write a letter. Blah, blah blah! And then pretty soon, 'okay you can hire her.' But still it's like ... We have a female sound mixer, a female sound recorder on this set. So we tried as much as we could to fill every position, but still I looked at my grip and electric, they're all Latino but they were all men. I'm like, 'shit,' we got one thing right. But no women in 75 percent of the crew.

CineMovie: But do you find you have to keep proving yourself. I mean you proved yourself already. Men can have a bomb and then go on to shoot the next bomb.

Catherine: Of course, we all go into director's jail. Then you have to prove yourself to do the next one. Then you get less money and less pay and less money on the screen. But then I'm like, 'okay make this look like a big action movie,' but the budget's $15 [million] so that's not a big studio action budget. But we went for it and then we have the enthusiasm of the Mexican crew. Some of the money probably went farther because Tijuana doesn't shoot often so the locations weren't that expensive. Nobody shoots Tijuana for Tijuana. So we were celebrating a place that isn't saturated like Georgia or some place with millions of productions. So I think we stretched it. We got the drone shots. We've got the helicopter shots. We tried to make it look as big as we could. But yeah, it's a challenge every time.

CineMovie: For that budget, it's a great job. People should be flocking to you after this but it's so sad that's not the case for women.

Catherine: Yeah, it's not as easy for women.

CineMovie: Look at Robert Rodriguez with his budgets. He launched... propelled himself into...

Catherine: People are just so used to... we've had 2000 years where you see a man's face on a coin; you see the man as a general; you see the man as a president. You expect the man to be the leader. So they don't really expect a small person like me to come in, 'okay, I want five police trucks here and a helicopter.' That's just out of the realm of most people's brains.

CineMovie: You're changing all that. Now you're going to change it with this movie.

Catherine: We are. Yeah, I like that. That's a good attitude.

Catch all the action and Latinos behind and in front of the camera in MISS BALA, now playing in movie theaters.
blog comments powered by DISQUS back to top