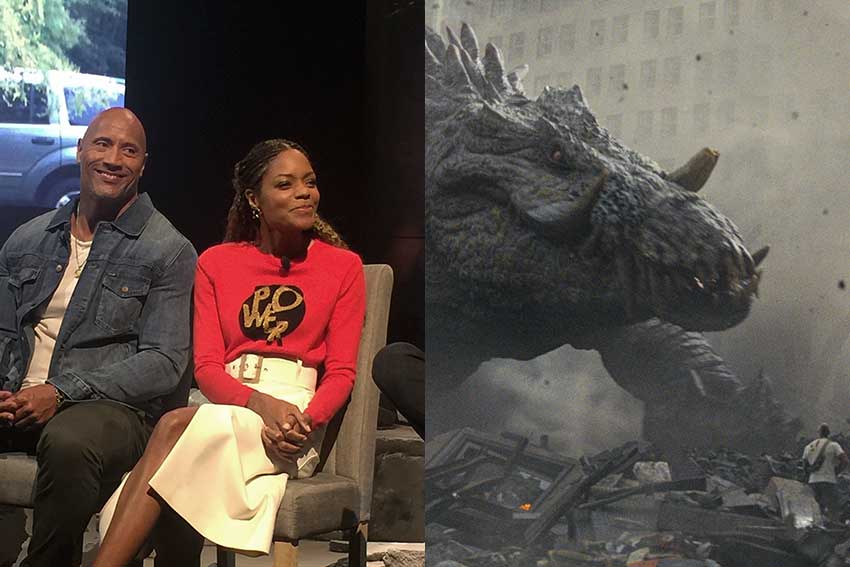 A 13-ton airborne wolf, a super-sized gorilla and falling skyscrapers are just some of the things the stars of RAMPAGE had to imagine while in production on the action adventure. For Oscar nominee Naomie Harris, RAMPAGE was her first time working extensively with green screen and tennis balls, and it threw her off her game. She reveals she relied on her co-star Dwayne Johnson to guide her throught this new experience of green screen acting.

In RAMPAGE, Dwayne Johnson stars as primatologist David Okay, a man who prefers the company of wild animals over humans. His best friend is a rare albino silverback gorilla who he rescued from poachers as an orphan. George, the gentle giant, mutates into a King Kong-like creature when an illegal science experiment goes awry. Other creatures suffer the same mutation, and a monster rampage ensues in Downtown Chicago.

RAMPAGE director Brad Peyton and his crew were able to see the CG monsters using a N-Cam, a small virtual camera system that attaches to the front of the camera to show the CG extension in real time during production. However, the actors didn’t have that high tech capability during those scenes and relied on the old school trick of looking at the tennis ball which no actor enjoys. Dwayne Johnson, his costars Naomie Harris, Jeffrey Dean Morgan and Joe Manganiello had to imagine a 50 feet high and 85 feet long wolf or a gargantuan mutant crocodile using tennis balls to focus their eye-lines on.

Naomie Harris is no stranger to action movies (SKYFALL, 28 DAYS LATER), but RAMPAGE is her first monster movie. As a recurring character in the Daniel Craig James Bond movies, she performed live action stunts in the real world opposed to a closed green set like on RAMPAGE. “I went into it thinking it was going to be the same kind of deal,” she said at the RAMPAGE press conference in Los Angeles.” Actually it was completely different.”

The British actress described having to look at numbered tennis balls while on set. The director would shout the number of the tennis ball to look at. For example, tennis ball #3 was the falling building and #5 was the flying wolf. Her first days on the stage were jarring for the actress.

“I was completely out of my mind because I was absolutely terrified. This was something completely new to me so I really needed to lean on Dwayne. He’s amazing. He’s the master at this. This is his world. It’ s not mine at all. I felt completely lost in the beginning but the way to get through it is to pretend you’re a kid and just to play and have fun.”

Naomie and Dwayne also had to contend with the enormous amount of rubble on the set from the monster’s destruction of Chicago. Director Brad Peyton (SAN ANDREAS, JOURNEY 2: THE MYSTERIOUS ISLAND) takes full credit for his addiction to destruction seen in most of his movies, but more so in RAMPAGE. The director admitted to CineMovie that his comfort zone is destruction. “It’s weird I like destruction but it seems to work,” said the director. However, Dwayne has a different point of view. “He needs therapy.”

RAMPAGE is in movie theaters April 13.