Premiering on Hulu July 29, “South Beach” is a six-episode series that interweaves music with revenge, betrayal, love and
mystery set in the Latino capital of the world - Miami. Villafañe plays Carmen, a beautiful, but bad girl pop star, but Villafañe doesn’t see Carmen as all bad.

“She’s a bad girl, but in an innocent way. I felt the challenge to kind of bring her to life, and I’ve never played a part like that before.”

Villafañe almost didn’t get the role of Carmen on “South Beach.” “South Beach.” writer/producer Brian Hurwitz, who had worked with Villafañe on a Lifetime movie when she was very young, told her “absolutely not.” He still saw her as a child, and not someone who would be “sexy and making out with a lot of guys.” After auditioning, Villafañe won the role as the pop diva. 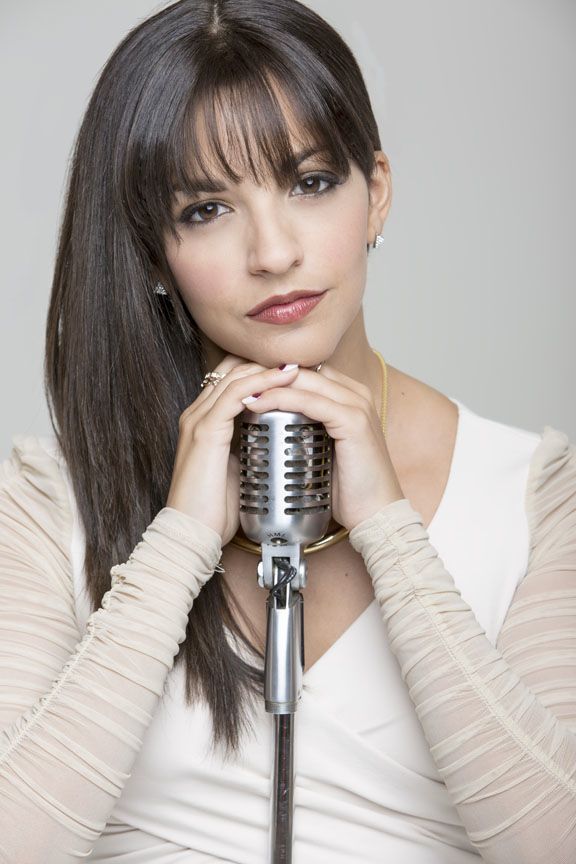 Anna Villafañe had never sung professionally before even as a music major at Loyola Marymount College in Los Angeles. She called the experience  “daunting” and “vulnerable” as she belted out tunes in the raw with no backing vocals or mixes.

“All of a sudden I’m this singer/actress and I’m like what? How did this happen? Its’ a different lifestyle to take care of voice. It’s an instrument.”

The Hulu series served as practice for her next gig playing Gloria Estefan in the Broadway show "On Your Feet” in November, which chronicles The Miami Sound Machine singer’s life from the age of 17 to 33. She calls it a “dream role” in that she gets to play with a broad range of emotions by portraying the iconic Latina singer from her teen years to life as international star, mother and wife. She feels the pressure and huge responsibility involved with this Broadway musical.

Villafañe tells CineMovie she’s studying everything about Gloria Estefan including mannerisms, her performance quirks and the way Estefan plays with her hair while she speaks to prepare her for rehearsals in September.

In August, Villafañe can also be seen in MAX STEEL starring Ben Winchell, Maria Bello and Andy Garcia, a live-action adaptation of Mattel’s teen superhero line of toy action figures, in which she’ll play the 16-year-old neighbor to Max. The role in the superhero movie originally was originally described as a blonde all-American girl-next-door, so when the Latina brunette showed up at the casting call, she felt out of place among other blondes in the room. “Why am I standing here. I’m so wrong for this,” she thought to herself. Regardless she gave it her all, and it payed off. She won the role after a successful chemistry test with the MAX STEEL star. However, MAX STEEL writer Christopher Yost (Thor: The Dark World, Teenage ) said they would rewrite the role which worried Villafañe because she didn’t want to play up stereotypes or accents. Luckily the only change was the name of the character from Sidney Garner to Sofia Martinez. Villafañe was thrilled.

“The all-American girl-next-door now is potentially Latina. It says a lot of where we are at now… finally. I think things are slowly changing in the film industry, and it’s a reflection of real life.”

Villafañe is extra proud that her character also saves the hero a couple of times, and describes her as a go-getter rather than a damsel in distress.

On the MAX STEEL set, Villafañe bonded with her co-star Andy Garcia who she only shares one scene, but off screen they bonded over their shared Cuban culture. She describes the Ocean’s Twelve and Untouchables actor as “goofy, funny, and cool.” She also spent time with him learning more about the craft of acting.

“He was kind of like our dad on set. He’s such a pro and we learned a lot from watching him.”

Garcia wasn’t what she imagined. She expected a “Euro-type, larger than life, and the ultimate Hispanic male,” but he was quite the opposite as the life of the party and a jokester on set with his cigar in hand.

Catch Anna Villafañe now on Hulu in episodes of “South Beach” and watch out for this up-and-coming Latina actress.