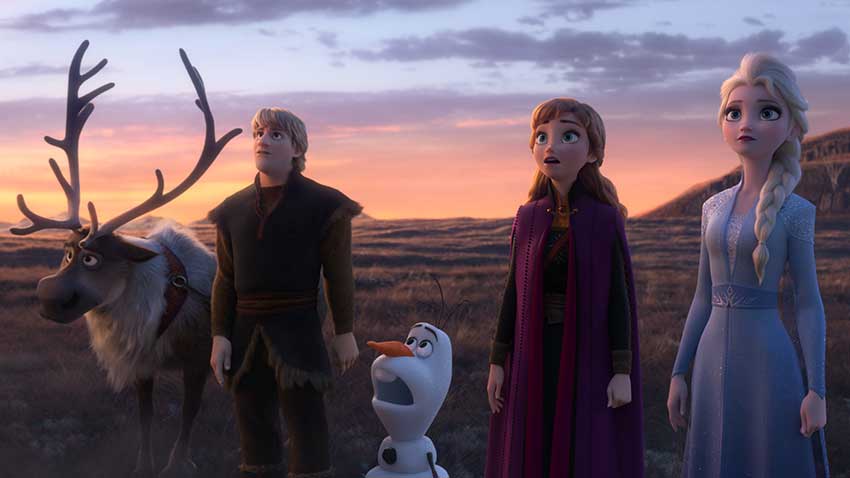 In 2015, Disney released a FROZEN short to play ahead of Pixar's COCO, and it was 21 minutes of torture. Suffice it to say, my expectations going into FROZEN 2 were very low. So to my surprise the follow-up to the massive 2013 hit was equally entertaining and ten times more hilarious and magical.

Anna, Elsa, Kristoff, Olaf and Sven leave Arendelle after a disaster hits to find the source of a mysterious voice calling out to Elsa. They travel to an enchanted forest where they discover a long lost tribe. Elsa is drawn to the place where she will discover the origins of her powers.

The trailers for FROZEN 2 gave the impression the sequel would be darker than the first film, but the first film had more darker tones than the new release. I predict children will enjoy this one much more because of the many fun moments between the characters, and of course Olaf steals the show. Adults will get a kick out of the humor especially the 80s love ballet sung by Kristoff along with the animated sequence which resembles an 80s music video (Journey meets Queen) to hilarious results.

Speaking of the music, the Lopez’s once again deliver music that give you all sort of feels. They did not try to replicate “Let It Go” or compose a song to rival that anthem. Instead, they focused on original pieces suitable to the new adventure, and it certainly doesn’t hurt to have Idina Menzel’s resounding voice making their music sound even more glorious.

Idina Menzel’s voice is heavenly to listen to and the musical number that stands out the most is her belting out, “Into the Unknown” which is clearly the most memorable musical piece from FROZEN 2.

FROZEN 2 continues the theme of sisterly love sometimes to an annoying point. Anna is very clingy and doesn’t trust her sister’s decisions so she’s often second guessing her next move. In short, Anna must learn to let it go (pun intended) and trust her sister.

While the original focused on the love story between sisters, the sequel also sets forth a positive message about the relationship between Anna and Kristoff. Instead of the woman pining for the man, the filmmakers have Kristoff trying to propose to Anna but she’s so busy taking care of her sister, she fails to see the effort by Kristof.  In essence, she’s in control of the relationship, so instead of taking charge and demanding she give him the time of day - he patiently awaits and offers to back her up with whatever she needs. That’s a great message for young girls that a relationship is about taking and giving. It’s about time we see the man behind the woman, and not vice versa.

The animation is superb, and it seems to have improved since 2013. The colors are much more vibrant but the settings are much more magical this time around. In FROZEN, the settings were much colder (another pun) so the colors were more muted, but the enchanted land the characters visit offered the chance to make the film more vibrant and stimulating. Along with the music, the visuals were just out of this world.

FROZEN 2 is a great time for the family, and children as well as the adults will definitely enjoy this second outing.