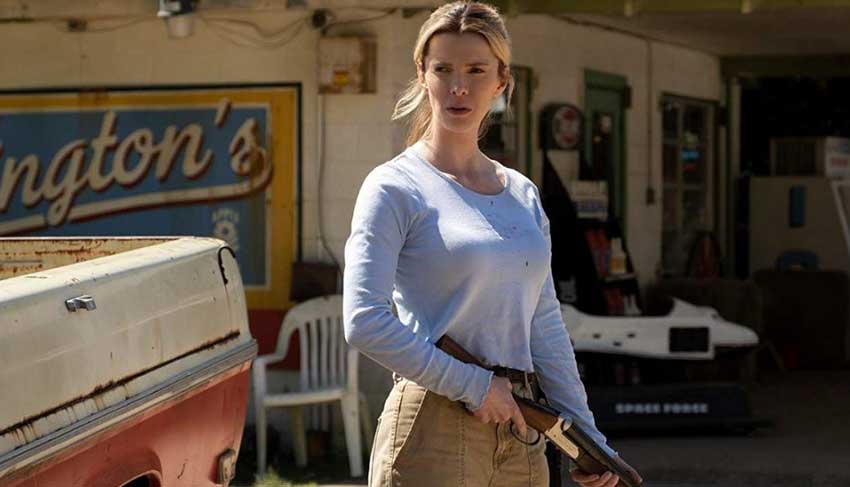 From the guys that brought us WATCHMEN and THE LEFTOVERS comes a political satire that should make both liberals and conservatives laugh at themselves. THE HUNT is a fun, campy, violent comedy that pokes fun at both sides, but it eventually wears out its welcome.

In THE HUNT, elites are hunting twelve kidnapped strangers in a remote area. They must survive and find out why they are someone's target. The film stars Betty Gilpin ("Glow") in a scene-stealing performance along with Hilary Swank, Emma Roberts, Ike Barinholtz and Ethan Suplee.

Nick Cuse ("Watchmen," "The Leftovers") and Damon Lindelof ("Lost," "Watchmen") wrote the script for the Blumhouse production directed by Craig Zobel (COMPLIANCE, Z FOR ZACARIAH). "Watchmen," their other project together, definitely indulges in political commentary, but the two go for camp in THE HUNT with a violent story of survival.

While the trailers suggest THE PURGE-style storyline, the film is nothing like the aforementioned movie. Overblown music gets the mood going at the very beginning, informing us viewers are in for an over-the-top ride. The body count is high in the first half-hour with some PSYCHO-inspired moments.

Betty Gilpin's Crystal becomes the leader of the pack with her survivalist skills although we know nothing of her past nor any of the other targets background. Crystal's mastery of guns and fighting skills is impressive.

THE HUNT is filled with hilarious satire about political correctness among the "elites," but it also takes equal jabs at the targets who represent the conservative side of the argument.

Once the hunt is on, the scenes are quite shocking that it incites a reaction from the audience for the first half of the thriller. THE HUNT is definitely a film to enjoy with a crowd. It's quite gory as well so the faint of heart beware.

While Galpin's Crystal is the most sympathetic of the characters, her violent nature and no mercy ways are shocking given we have no background information on her. However, she give a standout performance as a bad ass that should land her more leading roles.

There are a lot of questions as to why this is happening and how it's possible to kidnap 12 individuals and fly them to a remote area. Aside from the plausibility of the story, we know nothing of the characters nor the intentions from both sides, but what keeps your interest is getting to the mastermind of this human hunt.

The fun begins to dissipate once the story explains the character's motives and the reasons why the victims were chosen. The shtick becomes old, and the political talk grounds the film in reality which is not what most people want right now out of their entertainment. Ultimately the final message is don't judge until you get to know the person which is commendable but most viewers aren't looking for a lesson from THE HUNT.

Luckily the film is only 90 minutes to lessen the blow of an unsatisfying ending. However, if you have a good sense of humor and like campy films, then you should enjoy at least a portion of it. THE HUNT will most likely be a cult favorite.

THE HUNT is now playing in movie theaters.