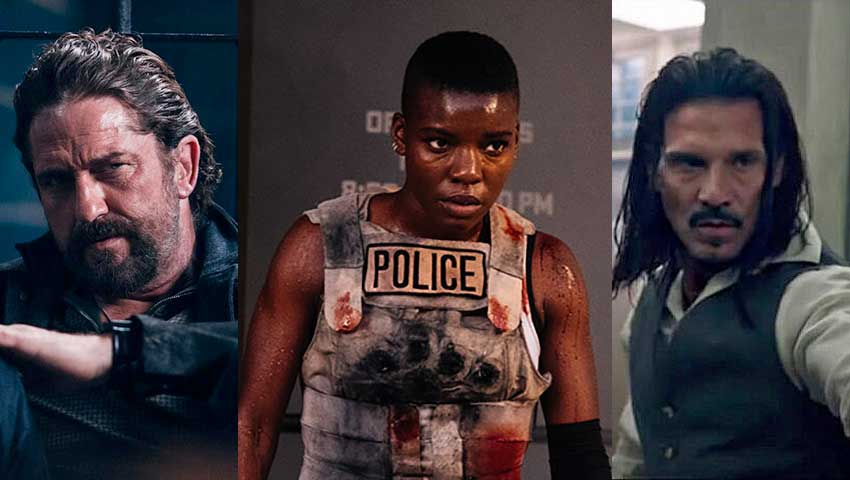 Teddy Murretto (Frank Grillo) is a fixer on the run from hitman Bob Viddick (Gerard Butler) in the Nevada desert. After his car stalls, he runs to the nearest town and encounters rookie officer Valerie Young who he assaults on purpose. She hauls him off to a small-town police station manned by second rate police officers. Murretto thinks he's safe in a holding cell until Viddick under false pretense, also gets himself locked up next to Muretto. Officer Young (Louder), however, derails Viddick's mission.

A more psychotic assassin (Huss) arrives at the precinct to put both of them down, and all hell breaks out.

COPSHOP gets off to a great start with a 70s style opening action sequence, but the rest of the movie is devoid of that style. However, most of the action takes place in one setting - the police precinct. Fans of John Carpenter's ASSAULT ON PRECINCT 13 will certainly feel the influence here.

COPSHOP is predictable in your ordinary shoot 'em up action movie but the screenplay from Carnahan and Kurt McLeod does have two things going for the story. First, you have a unique character in Officer Young played by Alexis Louder. While she's the only female officer in the precinct, her gender never comes into question. She's one of the guys and she's more than comfortable in the setting. She's not a kick-ass hero in the physical sense but rather she uses her intellect to outsmart everyone. She knows how to play the game, and fancies herself a gunslinger not so much in a cocky way but she's bought into the machismo of the whole group. Louder has the perfect look with her short hair, ray bans and bandana scarf around her neck. You immediately gravitate to her character.

The second thing the plot has going for it is second-guessing who's the worst villain. Officer Young doesn't know who to trust. Muretto and Viddick both warn Young not to trust the other person. She must make the call, and so does the viewer.

Butler and Grillo are interesting enough, but we've seen them play these sorts of creeps before. The psychotic killer played by Huss is a quirky and entertaining addition to this wild bunch.

Carnahan delivers his usual style of bloody shoot 'em action and body count. Apparently, the director didn't deliver the final cut of COPSHOP, according to Grillo's social media post. Unhappy with the final cut of his performance, he took to social media to defend the character's arc and blamed someone other than Carnahan for butchering his scenes.

Regardless, COPSHOP feels like a Carnahan production and delivers an action-packed and entertaining story with Alexis Louder holding her own against heavyweights like Butler and Grillo.

COPSHOP is in now playing in theaters.