'In The Heights' Movie Review: An Epic Adaptation 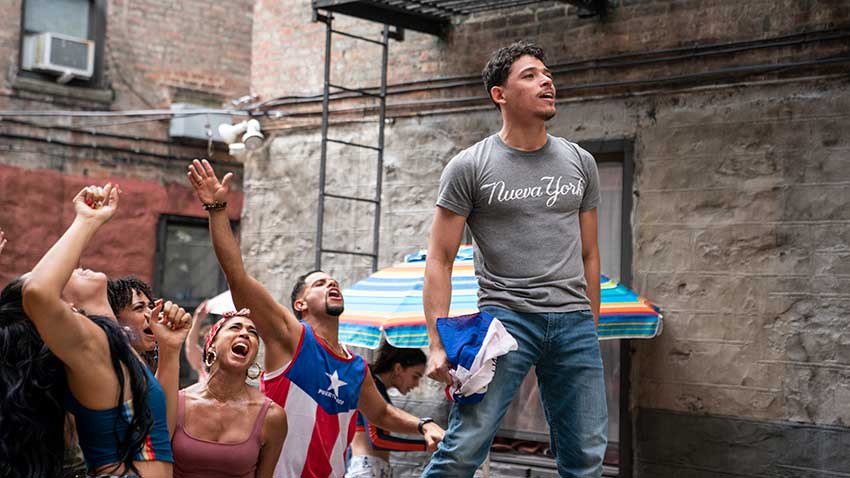 Jon M. Chu adapts Lin-Manuel Miranda’s hit Broadway show for the big screen in an epic way. The musical numbers are ambitious and grand in scope which brings Washington Heights to life. It's one of the best musical adaptations in a long time. Anthony Ramos proves he’s once again a rising star, but he’s not the only scene stealer.

Based on the book by Quiara Alegria Hudes, Miranda created the music and lyrics for the Broadway hit. Miranda originally played Usnavi de la Vega on stage but he cast his Hamilton actor Anthony Ramos as the cinematic version to play the bodega owner looking to sell his place and move to the Dominican Republic to rebuild his father’s beach side cabana business.

As someone who’s never watched the original Broadway production, I came to IN THE HEIGHTS with fresh eyes, and an unbiased perspective.

The film boasts an enormous amount of background dancers and extras for the musical numbers. Everyone in the film participates in song and dance including iconic actor Jimmy Smits.

Quiara Alegria Hudes adapted her book by the same name for the Broadway production and the big screen musical. The cinematic version of IN THE HEIGHTS doesn’t feel like a stage play adaptation which most adapted musicals suffer from. It so grand in nature, it’s hard to imagine how it was told in a closed environment - obviously with smaller musical routines. Chu’s musical vision is an explosion of creativity and community that relays to us outsiders the close-knit nature of the borough.

The most powerful musical number is “96,000” which takes place at the community pool in the area, Highbridge pool. The sequence contains 500 extras, synchronized swimming and crane shots that spanned various areas in one take. It’s was enormous and spectacular. Diaz, the young actor shines in that piece.

The most emotional and moving sequence comes from Merediz’ NYC subway musical number as she ponders whether to stay with her Washington Heights family or go to her mother’s side in the great beyond. It was so beautifully executed visually and technically with Merediz delivering the most memorable performance that will haunt you for the rest of the story. 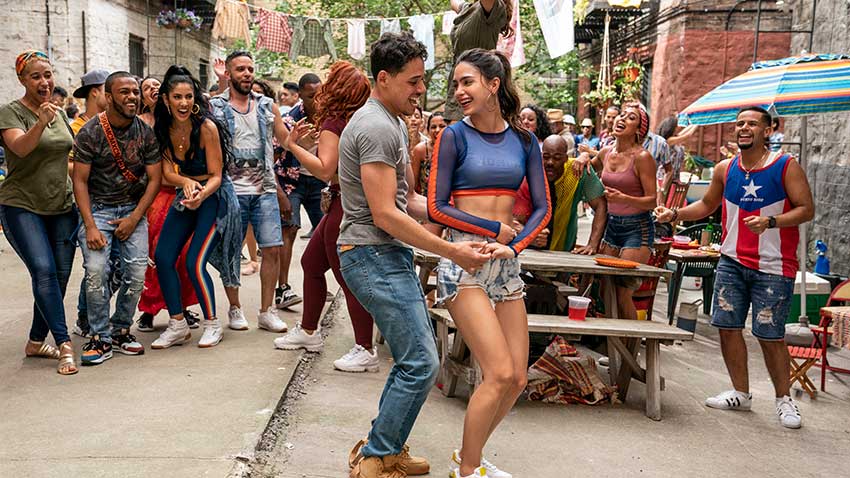 While the sense of community is the crutch of this story, it’s the various themes that pack the punch. Each character represents a different American dream. Usnavi envisions a better life in his father’s homeland, the Dominican Republic. His love interest Vanessa (Barrerra) has big dreams of becoming a clothing designer but she feels like she has to move out of the neighborhood to accomplish her desire. Nina (Leslie Grace) returns from Stanford University disillusioned and yearning for her close-knit community, but her father and borough expect her to be the block’s success story. Everyone else is just surviving the day to day, and the heat.

Two love stories also provide a backdrop for these characters. However, one is more interesting than the other. Usnavi pines for Vanessa but she’s a complicated character who has one goal in mind and doesn’t need a distraction. Luckily this romantic entanglement doesn’t drive the story. The community remains the focus of the story.

The other romantic subplot between the characters of Benny (Corey Hawkins) and Nina Grace) isn’t as compelling. The actors lack chemistry unfortunately so you may lose interest in that romance.

All the actors perform beautifully in their musical numbers. Miranda and Chu bring out the best in all the actors even those not trained as singers. Actors like Hawkins and Barrera, who are not known for their vocal abilities, shine here with beautiful renditions of their singing voice.

Anthony Ramos, of course, is the heart of the movie. The actor is very charismatic and relatable. He holds the movie together even when the story ventures off to other character’s subplots. He tells a story in a riveting fashion that keeps your attention for over two hours. The breakout star from Hamilton will no doubt become an even bigger star as a multi-hyphenate performer.

Chu was the right choice for the IN THE HEIGHTS adaptation. He brings years of experience as the filmmaker behind two STEP UP movies, and The LXD dance series, as well as an understanding of the Latino community that shines through.  What he achieves in this movie is outstanding with lavish numbers that impresses this viewer who's not a big fan of musicals.

The first portion of IN THE HEIGHTS relies heavily on musical numbers while the latter part contains less routines. It feels a bit uneven in that respect. At a running time of two hours and twenty-minutes, the gas runs out in terms of spectacle, but the communal experience never ends.