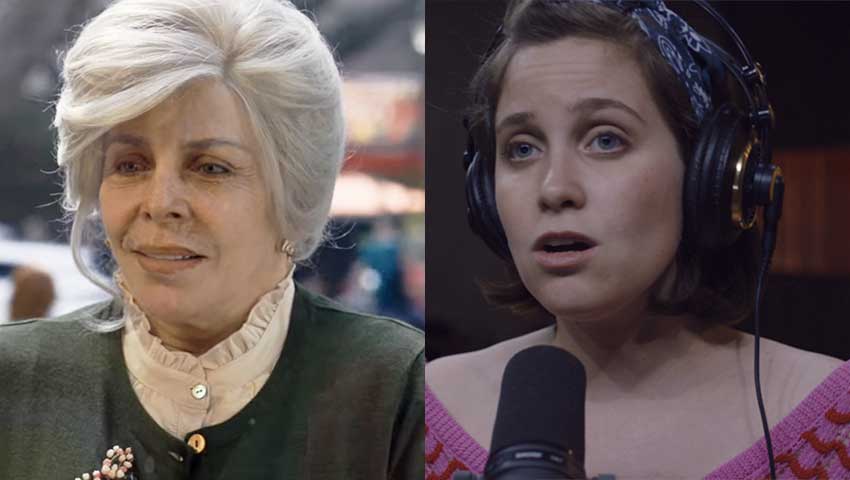 Mexico’s beloved actress Veronica Castro hits the big screen in CUANDO SEA JOVEN along with Natasha Dupeyron (Casa de Flores) playing her 22-year-old self. The comedy is a wholesome good time for the entire family, especially for your abuelitas. The swapping lives plot has been done to death but this one brings a few surprises and lots of charm.

CUANDO SEA JOVEN (translation: WHEN I’M YOUNG) is based on a Korean film, MISS GRANNY, and centers around 70-year-old Malena who wishes she could go back in time to follow her dreams of being a singer. Malena gets a second shot at fulfilling her dream when she transitions into her 22-year-old self (Dupeyron).

CUANDO SEA JOVEN is a production from Eugenio Derbez's 3Pas Studios and directed by Raul Martinez. The comedy is now playing in 300 theaters in the United States and opened in Mexico on September 15. Michael Ronda, Eduardo Santamaria, Pierre Louis, and Alejandra Barros also star with a special performance by Edgar Vivar and special participation by Maribel Fernandez and Manuel "Flaco" Ibañez.

In CUANDO SEA JOVEN, Malena (Castro) runs away from her son's family home when they decide to send her to assisted living. She calls her grandson and encourages him to continue with his musical aspirations despite his father's urging him to give it up. She comes across a mysterious photography studio where a photographer asks Malena to think of a time when she was the happiest. When she leaves the studio, the viewer sees the stride of an elderly person boarding a transit bus, but a reflection on the bus window shows that of a younger woman (Dupeyron).

After a brief identity crisis, she considers the miracle a second chance at life after feeling discarded by her son and his wife. Posing as "Maria," she takes a job at her old friend's cafe and comes across her grandson who after listening to her angelic voice during an impromptu karaoke session, asks her to be his rock band's lead singer.

Maria can't resist the second chance at her dream. The 22-year-old's mindset, however, is still that of a 70-year-old and she convinces the band to go old school with classic bolero tunes, and she treats the band like her grandchildren, often scolding them.  The clash of two generations provides the laughs in this sweet-natured Spanish-language flick.  Maria doesn't understand the social media references of the younger bandmates when they speak of Tinder or other apps and interprets them as disrespect.

The music in CUANDO SEA JOVEN is rather soothing as is Dupeyron's angelic singing. Grammy award-winning producer Julio Reyes Copello brings a modern touch to classic boleros with an electronic sound. Dupeyron tells CineMovie she has to learn how to sing in a Bolero style which she found challenging.

Your abuelos and parents will surely be taken back to their heyday listening to the movie's beautiful soundtrack.

Veronica Castro is aged quite a bit as Malena which is shocking to see since la reina de novelas (queen of soap operas) always looks glamorous and youthful with those cat-like eyes. Did she need convincing or was she looking for a challenge? Either way, she brings an endearing portrayal of a senior citizen who doesn't feel seen by her family.

Natasha Dupeyron provides the laughs as the fish-out-of-water with her impeccable comedic timing. Dupeyron also stars in Pantaya's original series,  Señorita 89, in a dramatic role. As someone new to the Mexican actress' career, she has quite an impressive acting range.

CUANDO SEA JOVEN is a modern comedy with an old-school charm that intergenerational families can enjoy.