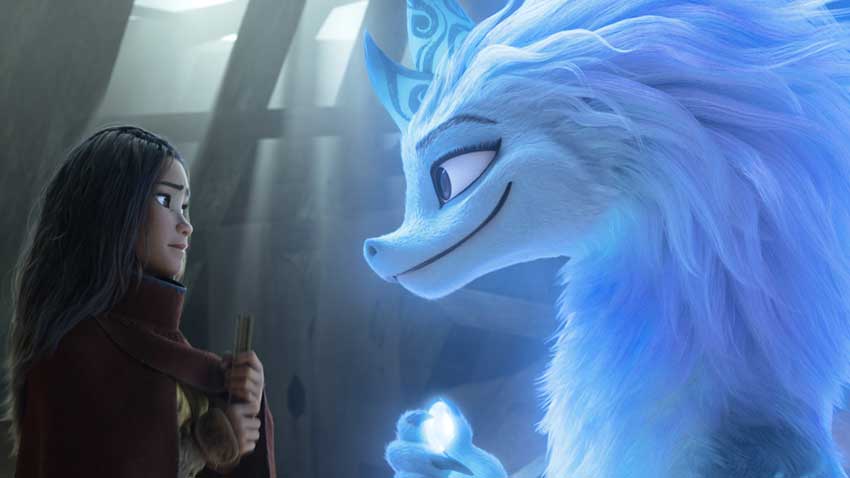 You won't be able to take your eyes off of RAYA AND THE LAST DRAGON with the beautiful palette of colors that make this Disney movie pop off your television screen. While the storyline doesn't break ground, women as the heroes and villains make it all the more interesting.

When the kingdom of Kumandra is threatened by an evil force, Raya must set off on a mission to find the last dragon who can save the world. Along the way, she is joined by other characters for comedic relief and help.

Tran's sweet voice adds an innocent and endearing quality to the warrior princess. But it's the always entertaining Awkwafina who's the scene-stealer in this Disney Animation feature as Sisu, the quirky dragon. Awkwafina is the comedic relief early on, but she's joined by other hilarious characters along the way which includes Tong (voiced by Wong), a gentle giant feeling lonely, a young 10-year-old boy running a boat cafe and a street hustling toddler with her minion monkeys.

While the plot is familiar, having a few women as protagonists and antagonists feels fresh. Raya and Sisu go up against an equally head-strong Namaari and her queen mother who aren't your typical mustache-twirling villains. All the characters have layers with a common theme amongst them all.

The animation and color palette jump off the screen with vibrant colors in every shot. While watching, you can't help but wonder at the beauty of the animation. Given its Asian-inspired setting, it's ripe with symbolism from the culture however it's not easily identifiable from what specific region since Kumundra is a fictional world.

It's nice to see a largely Asian-American cast play the characters in their usual voice rather than with an accent.

RAYA AND THE LAST DRAGON was completed with the talent and artists working from home during the pandemic. The film was overhauled last summer when Disney announced Carlos Estrada and Disney veteran Don Hall (MOANA, BIG HERO 6) were taking over as directors with the original filmmakers Paul Briggs and John Ripa listed still listed as co-directors. Carlos López Estrada is the only second Mexican-American filmmaker to helm a Disney animated film.

The lead was also swapped out with Tran assuming duties as the newest Disney princess last fall.

RAYA AND THE LAST DRAGON is a an entertaining film for the whole family. Child-less adults will enjoy the PG-rated humor.

Walt Disney Animation Studios’ “Raya and the Last Dragon’' will be available on Disney+ with Premier Access in most Disney+ markets, at the same time as it is released in theaters on March 5, 2021. Premier Access for the title will be priced at $29.99.