Review: 'Judas and the Black Messiah' is an Eye-Opening History Lesson 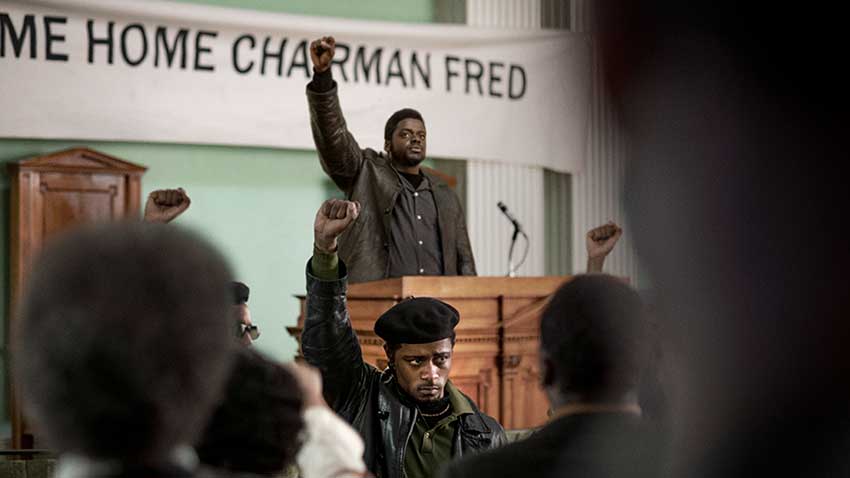 JUDAS AND THE BLACK MESSIAH is not only entertaining but educational with a fabulous ensemble and standout performances by Daniel Kaluuya and Dominique Fishback. The film dispels much of the negative perception of the Black Panther party as simply a radical militant group which the FBI categorized as a terrorist organization.

Judas in the title is in reference to the FBI informant William O’Neal (LaKeith Stanfield) who infiltrated Fred Hampton’s (Kaluuya) Illinois’ chapter of the Black Panther party. It led to the eventual cold-blooded murder of Hampton by the Chicago police on orders from the FBI.

In addition to Kaluuya, Stanfield and Fishback, JUDAS AND THE BLACK MESSIAH also stars Jesse Plemons (Fargo) as the FBI agent who recruited O’Neal and Martin Sheen as FBI Director J. Edgar Hoover.

Small time thief William O’Neal is busted and forced to infiltrate Hampton’s party as a get out of jail card. He does so without remorse to save his own skin.

JUDAS AND THE BLACK MESSIAH tells the story of the ultimate betrayal but the film also serves to show how a social movement looking to address social injustice was put down by the United States government. The events in the movie are eerie in that you see much of the same attitude today toward the Black Lives Matter movement, but more so from the GOP rather than the current federal government.

As someone with little knowledge of the Black Panther party, the film was very eye opening to my own misconceptions about the party that largely came from the media. The Black Panthers, while aggressive in their messaging, were attempting to advance things for Black Americans.

Hampton organized the Rainbow Coalition in 1969, a multicultural movement that included a white supremacist group, the Young Patriots and a Latino group, the Young Lords against police brutality and social issues plaguing their communities.

Hampton like other Black Party chapters raised money to fund local schools where Black children were provided meals and a better education.

Women played leadership roles in the Black Panther party and they trained their followers to respect them. O'Neal hits on one of the women and reprimanded for it by Hampton.

Dominique Fishback plays one of the women and Hampton's love interest.  The actress is one to look for with an impressive list already opposite Jamie Foxx in Netflix's PROJECT POWER, and her small but effective role in THE HATE U GIVE. She's phenomenal and commands every scene in JUDAS especially the ones she shares with Kaluuya. It's no surprise Kaluuya is a standout as well. The British-born actor exudes charisma and confidence that's captivating when he speaks truth with the same force as the real Hampton.

Stanfield delivers a subdued performance in JUDAS AND THE BLACK MESSIAH. While his character may be feeling a bit regretful of his actions, saving himself was a much bigger concern. Stanfield's approach was more of "it is what it is" which made it hard to root for him because of the lack of guilt. However, when you meet the real William O'Neil - that was his attitude. He showed no regret when he finally admitted he was the informant.

Shaka King directs JUDAS AND THE BLACK MESSIAH which he cowrote with Will Berson. He captures the feel and lingo of that era. Hearing "can you dig it," put a smile on my face since it's one of my favorites from that time period.

JUDAS AND THE BLACK MESSIAH is a must see film that educates about how little social injustice has advanced. Fred Hampton was only 21 when he was assasinated. Imagine what a powerhouse he could've been.