'The 355' Movie Review: The Ladies Deliver on the Action 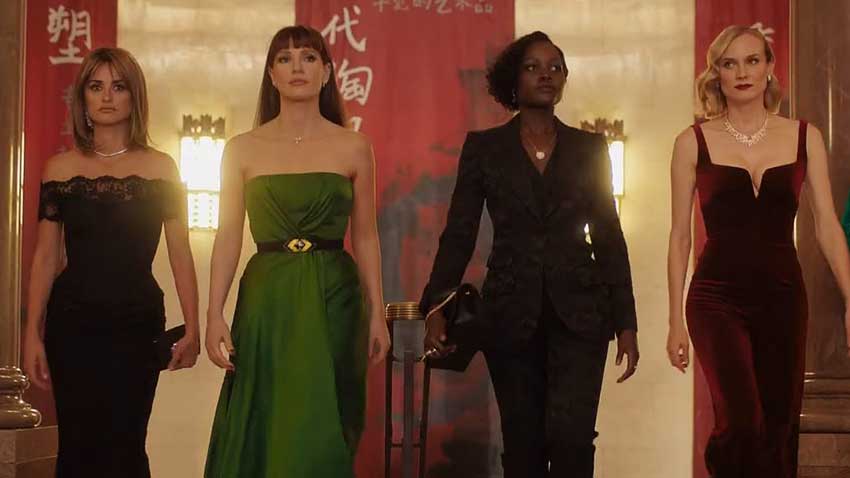 How can you not like a movie that stars Jessica Chastain, Lupita N'yongo, Diane Kruger, Penelope Cruz, Sebastian Stan and Edgar Ramirez? The cast alone in THE 355 are all outstanding actors so teaming them up together can only make for a good time as they kick ass. The fight scenes are all practical and realistic but the action is far from slick.

Simon Kinberg (X-MEN: THE DARK PHOENIX) directs the dream team of actors in the espionage thriller that brings together three agents and a psychologist (Cruz) from different spy agencies to stop a menace threatening the world. CIA agent Mason "Mace" Brown (Chastain) is a wild card who goes out on her own outside her agency to find a terrorist weapon that is being auctioned to the highest bidder on the black market. German agent Marie (Kruger) similarly is tracking down the target while a former MI6 agent joins the quest along with Graciela (Cruz) who reluctantly joins the team. Actress Bingbing Fan (X-MEN: DAYS OF FUTURE PAST) also enters the picture late as an agent. The elite team come to be known as the 355.

The January release and the director behind the film didn't inspire much confidence that the espionage thriller would be any good. January isn't the ideal month for a theatrical release and the first month of the year is usually considered a dumping ground. Working against its favor is also long-time producer turned director Simon Kinberg whose disastrous THE DARK PHOENIX was the worst film in the X-MEN movie franchise.

While far from a perfect action movie, THE 355 is quite entertaining although the plot hits every cliche in the spy thriller genre including the go-to predictable twists. Luckily Cruz plays the opposite of the female agents as someone with no skills but she helps in her own way.

What does stand out is the fight sequences. The action is not slick and lacks style but it's somewhat refreshing. These female agents go mano-a-mano using their feminine strengths such as using their elbows to punch their male assailants. The stunts are practical and realistic with little cutaways which usually hide the actor's stunt doubles, but the actors are visibly in the gritty action.

The main attraction for THE 355 is the cast. With a mediocre script by Theresa Rebeck and Simon Kinberg, the A-list talent bring their A-game with compelling characters with grit.