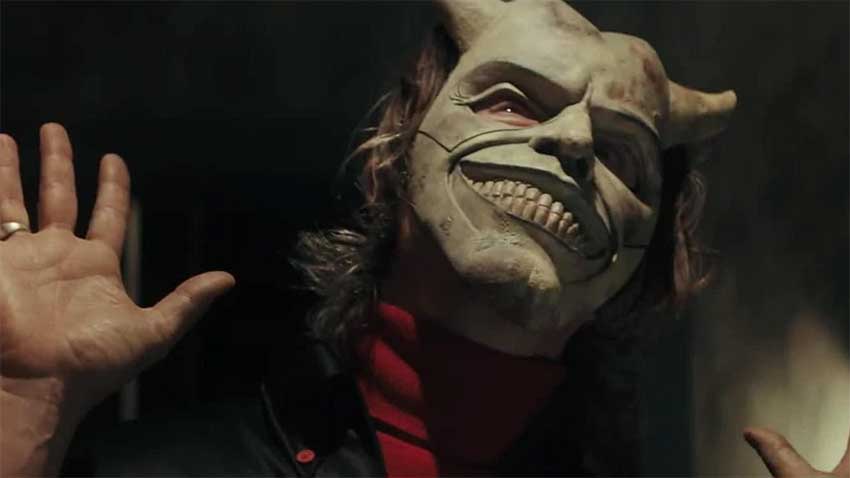 Ethan Hawke is creepy as hell as a kidnapper in Scott Derrickson’s THE BLACK PHONE, an original horror-thriller that will leave you feeling satisfied with a well-crafted story and an original premise.

THE BLACK PHONE is a thoroughly enjoyable, edge-of-your-seat thriller that will enthrall you from start to finish thanks to great storytelling and well-rounded characters. More importantly, the story is original and breathes new life into the horror/thriller genre.

Hawke is absolutely terrifying as the Grabber in a two-piece mask. He hides his face behind the mask but his unique features peak through here and there. It helps to separate the actor from the character which makes it all the more horrifying. On top of that, the story hints that the killer may be a pedophile which explains why he only abducts young boys.

Hawke doesn’t carry the film by himself with the two young actors delivering memorable performances as siblings along with Jeremy Davies as their alcoholic and abusive father. We get a sense of who the Shaw family is and their own traumas that inform the characters. Derrickson allows these characters to grow on us with a backstory that’s revealed over time and hooks the viewer in. Thames masterfully handles his range of emotions honestly in his home life, as a bullied kid and when he’s trapped in the basement. He experiences real growth as a character.

Likewise, Madeleine McGraw expertly balances her role as the comedic relief as the one with a special gift that’s crucial to the storyline. Davies also handles the job with perfection. At first, the patriarch is unsympathetic but we learn more about why he’s that way throughout the movie and over time becomes relatable.

Director and writer Scott Derrickson (SINISTER, THE EXORCISM OF EMILY ROSE) returns to his horror roots after helming Marvel’s DOCTOR STRANGE IN 2016. He constructs a tight and well-crafted thriller. The scares are minimal but one scene startled the audience collectively which then prompted laughter. It was perfect.

The script has many nuances, and you have to love that it doesn’t spell everything out with long monologues which is a staple of horror/thrillers.

Derrickson throws in a few nods to Latinos that no doubt will make us smile. Finney’s friend Robin (Miguel Cazarez Mora) refers to the Grabber as a “son of a bitch” in Spanish. It’s a nice touch that’s not overdone.

Fantasy/horror SFX icon Tom Savini created the chilling Grabber mask worn by Hawke. The two-piece prop is frightening and utterly creepy. Hawke wears it to full effect especially when he’s wearing the top portion only with a head tilt that sends chills down your spine. The devilish-looking prop will no doubt become a Halloween favorite in future holidays.

THE BLACK PHONE is in theaters Friday.