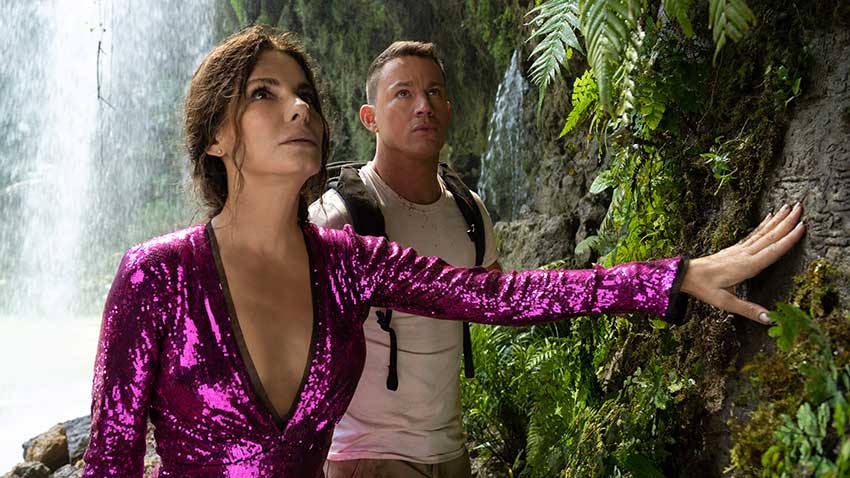 THE LOST CITY in no way reinvents the wheel in this action-adventure comedy but Sandra Bullock and Channing Tatum are so much fun to watch on screen with their goofy antics.  Adding Brad Pitt in the mix makes for some of the funniest moments in the film directed by brothers Adam and Aaron Nee.

When Angela (Bullock), a reclusive romance novelist, is kidnapped while on her book tour, her cover model (Tatum) attempts a rescue mission to save her from Radcliffe's billionaire treasure hunter.

America’s sweetheart is back after a decade hiatus from romantic comedies. Bullock thrives in this genre with her comedic timing and lovable personality. Channing Tatum is a great scene partner with his self-deprecating humor and knack for comedy. Together Bullock and Tatum make a sort of Laurel and Hardy duo and deliver a good-time in a screwball romantic adventure.

THE LOST CITY is not a ROMANCING THE STONE rip-off as some critics claim. THE LOST CITY is aware of its tropes and pokes fun at itself throughout. At one point, Tatum’s Alan character whines about swapping roles. “‘I’m the damsel in distress in this.”

Unlike previous adventure romance stories, Tatum and Bullock forego the romantic tension. They have chemistry but in a zany way. Alan is not the brightest tool in the shed while Bullock’s Angela is superior in intellect. They seem like a mismatch but by the end, you’re rooting for a romance.

The two leads are so enjoyable that the supporting cast feel like background. Poor Daniel Radcliffe gets short-changed again as a villain. He’s not menacing at all but quite annoying. He played a similar character in NOW YOU SEE ME 2. The former HARRY POTTER star thrives in independent projects rather than in mainstream Hollywood where he’s not given much to work with.

However Brad Pitt’s cameo was done just right. He comes in and out at just the right moment. You often expect these A-list cameos at the end, but the filmmakers surprise us.

Directors Adam and Aaron Nee helm their first big budget feature with much success. The brother filmmaking team bring in their brand of humor evident in their indie work. Oren Uziel and Dana Fox wrote the original screenplay but it’s obvious the Nee brothers reworked it with their unique take.

THE LOST CITY is a good time at the movie theater, and fans of both Tatum and Bullock won’t be disappointed.

THE LOST CITY is now playing in movie theaters.