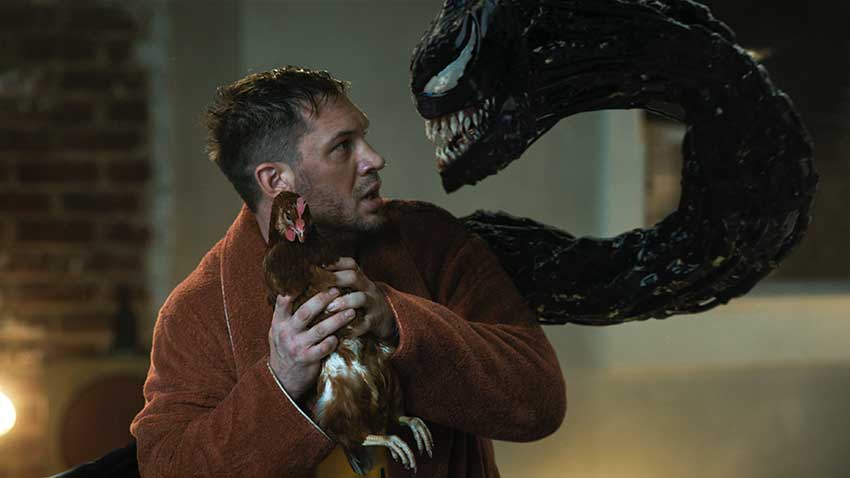 Tom Hardy returns as Eddie Brock along with his pal Venom for a bromance-filled plot lacking in action in the follow-up to 2018's VENOM. The main attraction is Hardy's hilarious and endearing performance in the buddy comedy, but on the superhero front VENOM: LET THERE BE CARNAGE doesn't live up to the title.

Andy Serkis takes over the reins of VENOM as the director with Michelle Williams and Reid Scott returning alongside Hardy. Woody Harrelson takes on the iconic comic book villain Cletus Kasady/Cassidy with Naomi Harris as his love interest Frances. Hardy is credited with the story and Kelly Marcel wrote the screenplay.

Hardy delivers a riveting performance once again playing this schizophrenic character. He brings depth to the character as he struggles to maintain a sense of himself while sharing his body with a symbiote. In VENOM, Hardy's comedic turn was a refreshing break from his dramatic repertoire. Again we see the actor's brilliance in playing that duality, but it wasn't nearly as comical as the original albeit still entertaining.

Andy Serkis brought his expertise in motion capture and CGI work, and that is evident in VENOM: LET THERE BE CARNAGE. I immensely enjoyed every aspect of Ruben Fleischer's VENOM except for the CGI scenes with Venom battling Riot which were less than stellar in comparison to the other actions scenes. Here the visual effects have improved somewhat although not 100% in the transitions between symbiote and the human character.

As expected, Harrelson delivers as the creepy and menacing serial killer which he is no stranger to playing. You definitely get the NATURAL BORN KILLERS vibe from Harrelson as Cletus. He's an interesting character as he toys with Eddie for the first half of the film, that is until his motivation for destruction becomes a love story which then makes him less lethal. More below.

Once Cletus transforms into Carnage, his motivation for destruction is to find and rescue his long-lost love Frances from a Ravencroft, a sanitarium for the mentally insane. While this pairing exists in the Marvel fandom, on-screen the lovesick puppy routine is a bad attempt to humanize Cletus. There's another scene where he berates Eddie for not caring to ask about the reasons why he killed his family and how his traumatic childhood turned him into a psychopath. It all seemed too forced. Not all villains need to have a sob tale behind their origin story. They were born evil.

Naomi Harris, who plays Cletus' soulmate Frances isn't fleshed out at all for us non-comic book fans. The character known as Shriek in the Marvel Fandom is a sort of a mutant with an ear-piercing scream. In VENOM 2, there is no explanation as to how she came into this power or whether it was from some sort of experiment-gone-wrong or accident like most of these villains in the Spider-verse. Cinematically, there is no precedent for Frances or someone like her, and the movie fails to give her any backstory except she exists purely as a love interest to a man. That's a disservice to a great actress like Harris.

Michelle Williams and Reid Scott's time here is wasted as well. They are thrown in the mix purely to have someone to rescue, and occasionally to help Eddie and Venom. Their inclusion felt more like a side note.

Action is in short supply for a Marvel comic book character on the big screen. In this VENOM sequel, the first half is a low-key buddy comedy with Brock and Venom working out their dual needs in odd couple fashion. It's not until Act 3 when you get the huge action sequences that fail to live up to the 2018 rendition. At times, the climax scene felt like a copycat of a Spider-man movie with a similar setting and a damsel in distress.

VENOM: LET THERE BE CARNAGE is a hilarious buddy comedy but most fans are not expecting that genre so it will be a rude awakening.