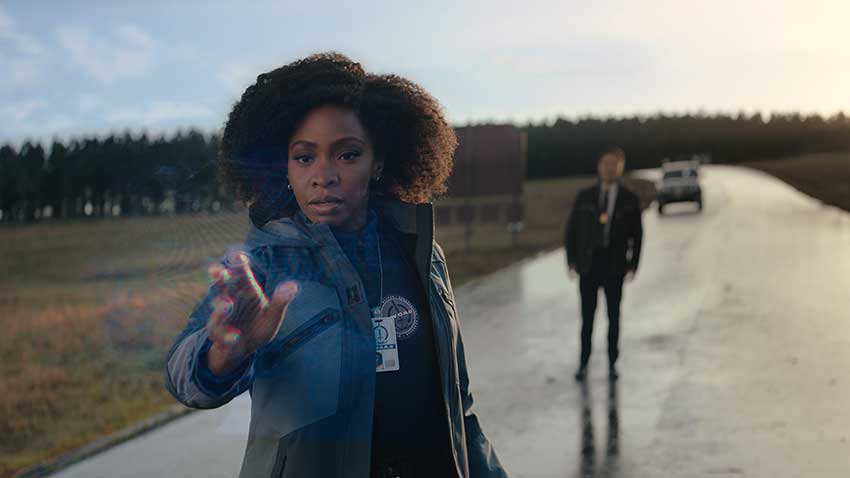 Marvel’s fourth episode of WandaVision appropriately titled “We Interrupt This Program” provides some answers to dozens of questions we’ve been clamoring for since WandaVision premiered. Here’s the lowdown on episode 4 in case you don’t have Disney+.

Fans have been anticipating Marvel pulling back the curtain to reveal what’s behind Wanda’s make believe world where she and Vision are enjoying suburbia as a happy couple. Episode 4 is more along the MCU than PLEASANTVILLE.

When we last left Wanda and her twins in episode 3, Geraldine aka Monica Rambeau mentions Ultron and Wanda banishes her. She’s kicked into the current universe and military vehicles approach.

Episode 4 opens with voices of young Monica and her mom Maria talking to one another as adult Monica awakens in a lounger next to an empty hospital bed. Maria says she can’t leave, and Monica replies she can stay with her grandma. Then she goes on to say she wants to be an air force pilot (like mom) and build a spaceship. Then Brie Larson’s voice chimes in. The conversations playing are from the CAPTAIN MARVEL movie. On screen, Monica’s body is reforming from ashes. She was one of the victims of Thanos’ blip.

Monica eventually finds out her mom Maria died of cancer a few years prior.

Monica resumes life as Captain Rambeau by reporting to S.W.O.R.D. Headquarters. The new agency stands for Sentient Weapon Observation Response Division. Her mom was the head of this new agency, but now her former colleague Director Hayward is now running the show and filing her in on the new developments. She learns she’s been grounded and tasked with a ground threat.

While walking through the facility, they walk through a warehouse where sentient weapons are being built. Monica inquires to the reason, and Director Hayward says, “Space is full of new threats.” It’ll be interesting to see if those weapons play a role in this series, future Marvel movies or upcoming series.

Monica drives out to a remote location and finds FBI agent James E. Woo in front of a sign for a town named Westview. Randall Park reprises his role from ANT-MAN 2. Two local sheriffs greet them and tell them there is no such town of Westview, and they are forbidden from entering. They then disappear. Woo informs them they are tasked with finding a missing town. Monica pulls out the helicopter-looking drone we saw in an earlier episode. It vanishes as soon as it hits some sort of energy field. She approaches the area and encounters the invisible wall, which pulls her in.

Twenty-four hours later, we reunite with Kat Dennings’ Darcy from the Thor movies. Natalie Portman’s former astrophysics intern rides in a military vehicle along with four other specialists. They arrive to a temporary base stationed right outside Westview.

Darcy, now Dr. Lewis, is tasked with figuring out what is going on. She works her magic and discovers some form of radiation dating back to the Big Bang emanating from the area. She discovers this relic radiation is intertwined with a broadcast frequency. She requests an old school television set. With the TV set, they see what we have been watching for the last three episodes.

Agent Woo and Dr. Lewis attempt to try to get through to Wanda. Woo talks to Wanda through a radio. That explains how the voice in episode 2 was coming through the radio in one of the scenes. The transmission stops.

Woo has one of the funniest lines in the episode as they watch the retro sitcom unfolding with Wanda and Vision, “You’re saying the universe created a sitcom starring two Avengers.”

At command central, Woo starts to chart out the same questions viewers have about the show like why the hexagon shape. They also start identifying the supporting sitcom cast on the board.

Dr. Darcy admits she’s “invested” watching Wanda in her 70s sitcom having babies. Then it goes dark. They see what’s about to happen to Monica, but it seems something or someone is censoring what they can see but we already know what happens.

Then there is a raucous outside, and they all exit. The sitcom continues playing, and we’re now in full screen. Wanda confronts Geraldine/Monica and her Avenger powers emerge sending Monica flying through a few walls and then outside the energy field.

Vehicles and agents near Monica as she lays out on the field. 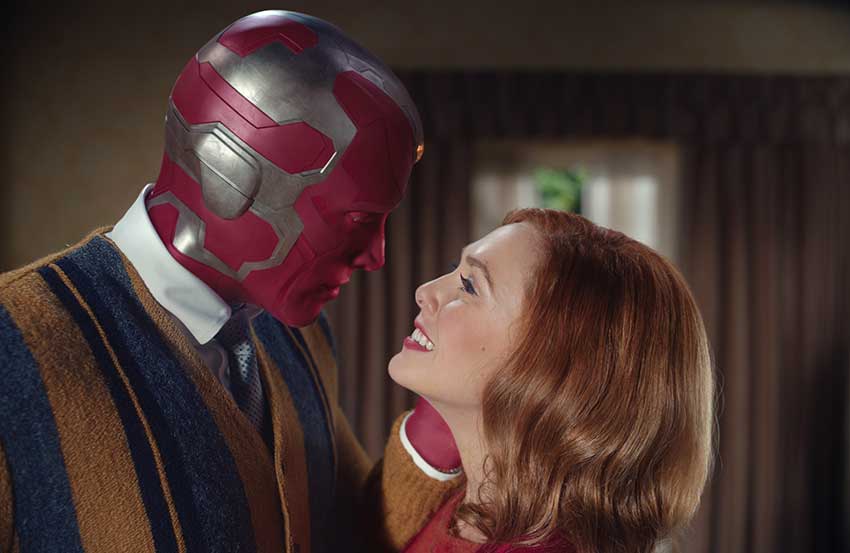 Back to Wanda in her sitcom life, and she’s pondering what she just did. She uses her powers to repair the damage, and then she turns her attention to the babies. Reality is setting in, and she seems to know it as much as she tries to play along. Then Vision walks in. When she turns around she sees a dead version of Vision talking. He notices something’s off but she assures him everything is alright. Her face says otherwise.

Then it’s back to Monica who tells Dr. Darcy and agent Woo that “it’s all Wanda.” We know she’s controlling the whole situation.

Then it’s back to Wandaland where to goes back to playing pretend with Vision and their two babies.

The “We Interrupt This Program” episode is clever in the way they entwine Wanda’s sitcom and present day. Kat Dennings and Randall Park make a dynamic duo, and hope to see more of them. While it provides some answers, there’s a whole lot of questions remaining that Marvel will no doubt drop with a bang in the remaining two episodes.