Set in 1945 as World War II is nearing the end, the Allies are pushing through Europe against the Nazis. Brad Pitt (Inglourious Basterds) is once again hunting Nazi’s this time in a Sherman tank. Pitt plays “Wardaddy,” a hardened army sergeant leading his five-man crew behind enemy lines. Peña, LaBeouf and Bernthal (“Walking Dead”) man Wardaddy’s tank. They are like family squabbling with each other, but more importantly each has an important job to perform and one mistake will cost them all their lives. One of their crew is killed, and a new soldier replaces him but Norman Ellison (Logan Lerman) hasn’t toughened up yet with his only experience being a typist for the army. It’s a difficult transition for the young man, but Wardaddy breaks him in the hard way.

The dynamic between the characters is outstanding. The actors are so in tune with their characters and with each other that everybody stands out which is usually not the case. Each has their own distinct personality with names like Wardaddy, Gordo (Peña) Bible, Wardaddy and Coon-Ass. Logan Lerman and Michael Peña said in an interview that director David Ayer had the actors sparing or “beating each other up” before the film started shooting including with mega-star Brad Pitt. Peña says it was effective in working out any tension before the cameras rolled. Peña also worked out their characters by referencing the 80s animated series, Voltron. Voltron the super robot was piloted jointly by humans who were responsible for each body part. So Peña, LaBeouf and Bernthal decided which part they were responsible for. 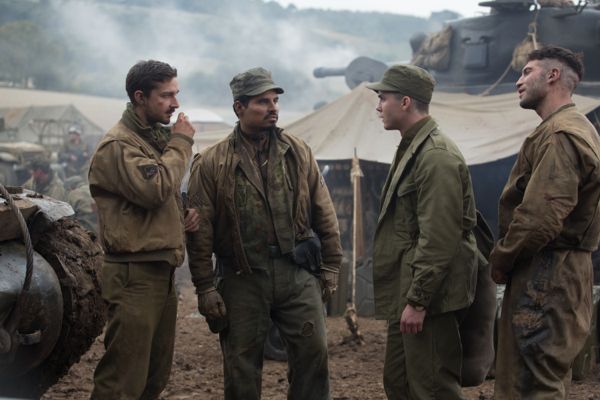 This is probably one of my favorite performances by Brad Pitt. It’s nothing like we’ve seen before in that he’s never played such a hardened and serious character like Wardaddy. At first he’s not likable in his treatment of the new guy but soon you see how necessary his behavior is in a time of war. Along with The Curious Case of Benjamin Button, this performance is right up there as his best.

Shia LaBeouf is also exceptional as Bible in a role we’ve never seen him play before. Bible is very subdued and reflective as a Bible quoting soldier. It was actually nice not to see him as a fast-talking, neurotic kid. FURY is definitely a very adult role for him.

Michael Peña also delivers a stand out performance. This underrated actor is consistently good in all his roles with a range that’s sure to earn him an Oscar nomination one day. He certainly deserved it for David Ayer’s other movie End of Watch. 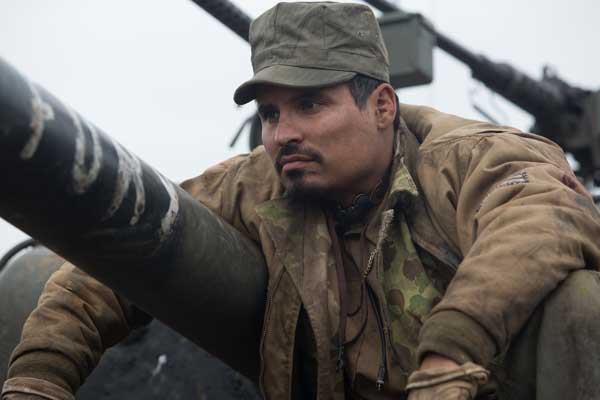 If you thought Jon Bernthal was unnerving in “The Walking Dead,” he’s even more so in FURY, but not in a lunatic sort of way. Coon-Ass is a backwoods hick with no manners and terrible teeth. The usually good-looking actor is sort of disgusting to look at, but it certainly added to the depth of his character.

David Ayer is growing into a formidable director. The writer behind Training Day and The Fast and The Furious made his transition to directing a while ago, but he’s really hitting his mark with End of Watch and now with FURY. He’s known for his gritty urban stories so a World War II pic seemed out of character, but he demonstrated in FURY that he’s able to jump into another genre easily. In FURY, he certainly knows how to turn up the intensity not only in the action scenes but among the characters. He never sacrifices the character over the action instead using it to strengthen the bond between the characters and their story. Ayer served in the military which may explain why he was able to get such an authentic look and feel of comraderie in FURY.

We need more Hollywood directors like David Ayer. He’s one of the few that understands diversity casting and incorporates it in stories without hitting you over the head with it. Up next, Ayer is directing the DC Comics adaptation of Suicide Squad.