New on DVD: 'The Battle of the Five Armies' Movie Review: Ranking THE HOBBIT Trilogy 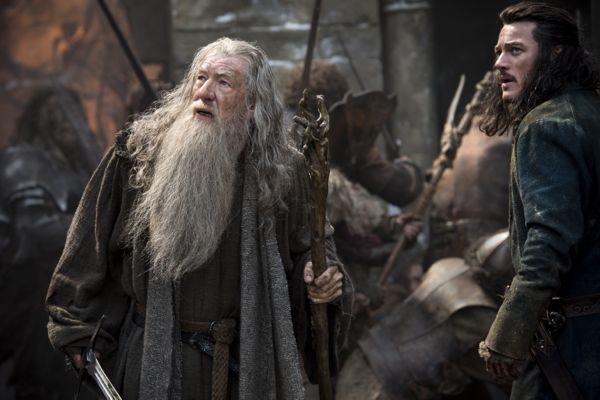 Update: THE HOBBIT: THE BATTLE OF FIVE ARMIES is now available on Blu-ray, DVD and Digital download. Here's what we thought about the film.

Now that the The Hobbit trilogy has come full circle, we can rank the Peter Jackson movies in order of best movies in the franchise. THE HOBBIT: THE BATTLE OF FIVE ARMIES brings the story to a close in an action-packed movie with enough battles that should leave fans satisfied, but overall was it the best film in the series?

Last year, Peter Jackson cut off THE DESOLATION OF SMAUG at a climactic moment when the Dragon Smaug is raving mad and about to take out his fiery breath out on the people of Lake-town. We pick up exactly where we left off and it literally felt like someone took their finger off the pause button. I expected a voice over to do a “previously on THE HOBBIT.” After the strange start, the film dives right into action with Smaug destroying the city, and Bard (Luke Evans) jumping into action as the heir to the dragon slayer legacy.

Meanwhile the Dwarves of Erebor have reclaimed the Lonely Mountain, but the King Under the Mountain, Thorin Oakenshield succumbs to dragon-sickness and begins to lose his mind as he becomes obsessed with the riches in the mountain and finding the legendary Arkenston. He turns against his comrades and trusts no one. It’s up to Bilbo to save the day this time when both the Elves and the Men of Lake-Town come for their own piece of the gold.

Madness is nothing new to the Tolkien stories. Frodo (Elijah Wood) lost his mind in Lord of the Rings: The Fellowship of the Ring because of the ring, and now we have Thorin going nuts over other shiny objects. It seemed like a retread of what we’ve seen before. 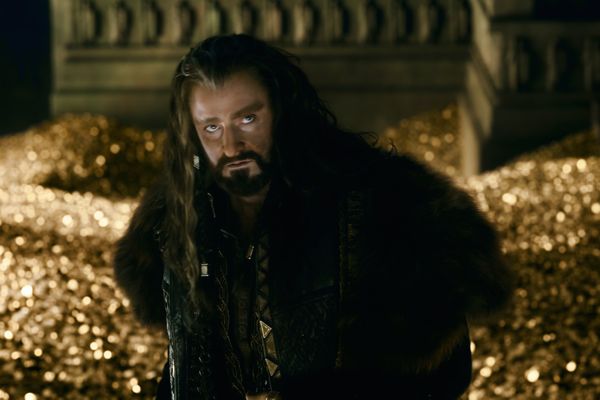 The more interesting story is the different factions coming together to battle each other over the riches in the mountain. Eventually they unite to fight against the Orcs who are sent by Sauron, the Dark Lord. That begins an onslaught of action sequences between all the parties in breathtaking shots mixed in with CGI. Eventually the multiple battles wear thin, but luckily they change location to the icy slopes for the climax where the Orcs are mounting their attack.

Compared to the previous films and Lord of the Rings trilogy, THE BATTLE OF THE FIVE ARMIES feels a little stagnant in that it doesn’t feel like a journey since the majority of the story takes place at the mountain. Another disappointment is the undeveloped love triangle between the Dwarf Kili (Aidan Turner), Tauriel (Evangeline Lily) and Legolas (Orlando Bloom).  In THE DESOLATION OF SMAUG, Jackson teases the potential love story between the two races so we expected more development of that potential love triangle in his finale.  However, the unlikely couple takes a back seat to the acton. Who doesn’t want to see a dwarf and elve kiss? Us nerdy girls like our action, but we love us some romance too. 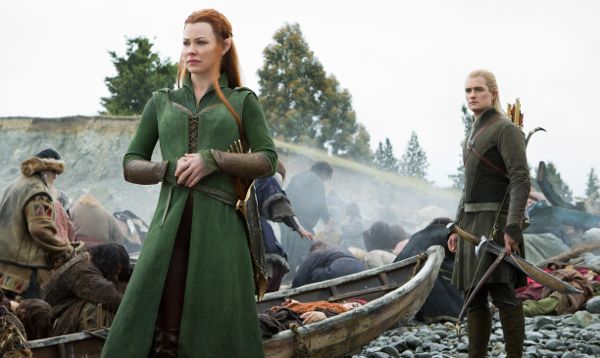 The one action scene I wanted more of was with the Elf Queen Galadriel (Cate Blanchett), Elvenking Elrond played by The Lord of the Rings Trilogy alum Hugo Weaving, and Christopher Lee’s return as the Wizard Saruman the White who all take on the Dark Lord, Sauron just as Gandalf is about to meet his end.  They all kicked butt with their special skills, and boy, can Christopher Lee wield his stick like a Jedi.  We know the trio quite well from the previous movies, but never have we seen them fight like his.  It was quite a thrill watching Cate Blanchett be a bad ass along with the two other cool actors. 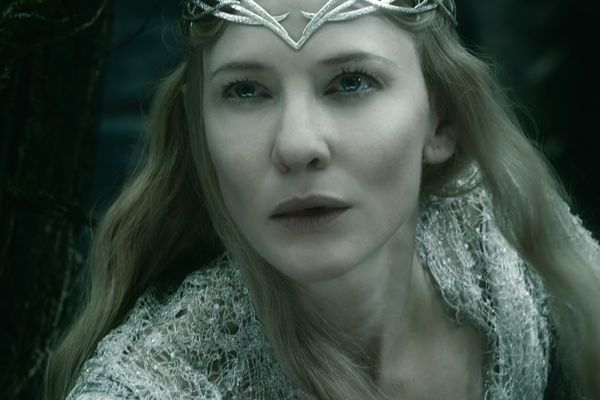 As soon as the credits rolled on THE BATTLE OF THE FIVE ARMIES, the ranking of the movies began.

Best of THE HOBBIT

1. The Hobbit: The Desolation of Smaug

With an equal amount of action, strong story, suspense and character conflict - this one is the Empire Strikes Back of this trilogy

2. The Hobbit: The Battle of the Five Armies

The last film in the series had a lot more comedy than the previous incarnations with some jaw-dropping action scenes, but it lacks depth.

3. The Hobbit: An Unexpected Journey

The first film in the trilogy definitely felt like an extension of the Lord of the Rings, but watching it in 48 frames per second was too distracting and annoying.

THE HOBBIT: THE BATTLE OF THE FIVE ARMIES is in movie theaters December 17.