So is the recently released THE WEDDING RINGER a wedding film for the ages? Most definitely not but it may become known as one of the weirdest, most outrageous ones.

When Doug (Josh Gad) begins planning his wedding to Gretchen (Kaley Cuoco-Sweeting), he is terrified to admit that he has no male friends to act as his best man or groomsmen. With little time to spare he enlists the aid of Jimmy (Kevin Hart), a man who makes his living as a professional groomsman who shows up to weddings and pretends to have had a lengthy relationship with the groom.

As the two work together to create the illusion of a longtime friendship, they round up a gaggle of misfits to play Doug’s pals and train them to appear in his wedding party. Needless to say, this does not go off without a hitch.

The theatrically trained Gad successfully pulls off the goofball with a heart routine and, like Hart, has impeccable comedic timing. It’s too bad THE WEDDING RINGER is so far beneath his more impressive on-screen pursuits. A film like Thank You For Sharing, in which he delivers a scene-stealing turn as a recovering sex addict, acts as a showcase of how far he can go with a more thoughtfully written script.

Hart on the other hand has a track record of infusing subpar scripts (Ride Along) with his charisma and off-the-cuff humor. He does the same here, playing off of Gad brilliantly, and turning several scenes that would have been otherwise unredeemable into moments one can’t help but laugh at. The two singing in unison about putting “weed in your coconut” shouldn’t be as hysterical as it is.

A strong suspension of disbelief must be employed for one to enjoy the film. Not so much to its unrealistic plot (a common aspect of comedies of this scope) but because much of the story arcs make little sense and are poorly woven together. On top of that, a slew of scenes that set out to be shocking just come off as bizarre. Doug having a certain area licked and then bitten by a dog to be exact. There are also points in which the humor goes too far with little payoff. For instance, Gretchen’s grandmother (Cloris Leachman) catching on fire at the dinner table. 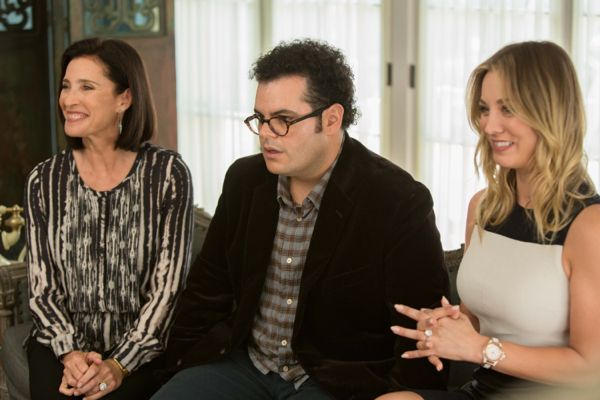 As to be expected with a male-driven buddy comedy, the majority of the women shown are atrocious. Annoying and money-grubbing they act as typical kill joy archetypes. Gretchen is demanding and wedding-obsessed while another groomsmen’s significant other is repeatedly heard off-screen shouting in rage. In a telling plot point, Doug becomes enamored with Nadia (Nicky Whelan), a guest at his bachelor party. Barely clothed and with little to say, the fun party girl is indirectly meant to be a depiction of how the ideal woman should be.

Reprieve emerges in the form of Olivia Thirlby (Juno, Nobody Walks) as Gretchen’s sister Alison. An accomplished stage and screen actress in her own right, she seems as though she belongs in a different film entirely… a better one. While Cuoco is given little to do, Thirlby brings a natural calm and earnestness to a character that’s one step ahead of Jimmy and Doug - making most of her scenes a breath of fresh air.