PUSS IN BOOTS, the number one film in America features two Latino leads, a rarity in Hollywood. A lot has changed since Antonio Banderas and Salma Hayek, the voices behind the 3D animated film, arrived to America to achieve their Hollywood dream.  Antonio explains why Hollywood has shifted into a new mentality.

Movie stars have tradionally gone to cable television to star in well-written scripted series (Laura Linney, Steve Buscemi)  but this fall, well-known movie actors flocked to network t.v.  CineMovie has your guide to  big screen talent headlining their own shows on the small screen.

Steven Soderbergh's CONTAGION will most likely send audiences into an anti-bacterial shopping spree.  Warner Bros. held a special screening of CONTAGION last week to further bring home the reality of viral epidemics with a panel of specialists including La Doctora Aliza.

Al Pacino's Scarface In Movie Theaters For One-Night Only

Brian De Palma's 1983 classic Scarface wlll be making it's way back into movie theaters for one-night only to celebrate the release of the first-ever Scarface on Blu-rayTM.

The Social Network was the big winner at the 68th Annual Golden Globe Awards hosted by Ricky Gervais.

The Social Network took Best Picture, Best Screenplay, Best Director for David Fincher, and Nine Inch Nails frontman turned composer Trent Reznor won his first award as Best Original Score for the movie based on the creation of Facebook.  The Fighter, as expected, swept the Best Supporting Actor and Actress category with Christian Bale and Melisso Leo taking home Golden Globes.  The Kids Are Alright tied with The Fighter for two wins for Best Actress Annette Bening and Best Comedy or Musical.

The Goya Awards, Spain's equivalent to the Academy Awards, announced the nominees Tuesday and some familiar faces from this side of the Atlantic made the cut for the best in Spanish Cinema for 2010.

Piranha 3D surprisingly received good reviews from critics before it's $10 million opening weekend but one naysayer is taking a bite out of the hype.
Add a comment

Just when you thought it was safe to go back into the water, a prehistoric fish that likes to nibble on humans invades spring break. Users review the disaster in the water monster movie. Watch below.

HBO's Bored To Death star Jason Schwartzman is no stranger to to the big screen (FUNNY PEOPLE, RUSHMORE) but in his latest film FANTASTIC MR. FOX, Jason ventures into his first animated role as "Ash" a teen fox looking for approval from his father, Mr. Fox played by George Clooney.                       INTERVIEW: Wes Anderson Explains His Creation Process

Wes Anderson's FANTASTIC MR. FOX is receiving rave reviews for his adaptation of Roald Dahl's children's classic.  Jason, a frequent star of director Wes Anderson's movies, reveals to CineMovie  the behind the scenes antics of Wes Anderson's unconventional approach in making the stop-motion animated film which included the actors munching on food and digging holes in the ground imitating their furry characters.  Watch the interview above.

About Jason Schwartzman:
JASON SCHWARTZMAN (Ash) made his motion picture acting debut as Max Fischer, an eccentric high school sophomore in Anderson’s RUSHMORE opposite Bill Murray in 1999, his performance garnering a nomination for Most Promising Actor from the Chicago Film Critics Association. Schwartzman reteamed with Anderson for THE DARJEELING LIMITED, which he co-wrote and starred in opposite Adrien Brody and Owen Wilson, and the short HOTEL CHEVALIER, starring with Natalie Portman.

Jason is currently starring in the new HBO comedy series “Bored To Death” which premiered in September.  Created by Jonathan Ames, the show also stars Ted Danson and Zach Galifianakis.

The Comic Con convention in San Diego has come and gone once again.  This year saw an increase in attendance with teeny boppers invading the geek fest - thanks to TWILIGHT taking over the convention early on during the five day event.

Here are some other eventful panel discussions and news from Comic Con 2009.

The Warner Brothers panel early Friday morning was full to capacity at San Diego’s 2009 Comic-Con. The first film to be introduced was Where The Wild Things Are,

where new star Max Record enchanted the audience with his warm, natural presence and impromptu speech. Standing there in front of several thousand enthusiastic people must have been overwhelming for the young Max, but he handled himself well and was able to recover as we watched a clip from the movie.

The film’s style was intriguing and the puppet-like characters reminded me of Sid and Marty Kroft’s creations from long ago. They are life-size, yet capable of showing personality and emotion. I wasn’t very excited about this film when originally announced, but now I’m curious enough that I really want to go. Artistically this film is a real challenge and I liked what I saw. I’m really rooting for this film and hope they nailed it.

The next film to be introduced was The Book of Eli starring Denzel Washington and Gary Oldman. This film was presented to us by showing an animated short, which was moving and powerful. The animated clip gives us some back-story on Gary Oldman’s character, Carnegie, and how he may have grown up with an extreme prejudice to anything religious. The filmmakers and the star were very vague about giving us more details, but Gary Oldman let it slip that the book of Eli may be about a super hero with the initials J.C. I’ll be watching for more info. The subsequent live-action clip showed a badass Denzel Washington in a post-apocalyptic world. The Hughes brothers have created a very stylish film.

The Third film to be presented was a re-make of Nightmare On Elm Street with Jackie Earle Haley as Freddy Krueger. I heard a lot of grumbling around me on this one. Although no one had a problem with Jackie Earle Haley taking on the role, some people had a problem with the film being remade at all. Why mess with a classic? The filmmakers justified their decision by stating that they are introducing the franchise to a whole new generation. They also promised that the new Nightmare would be even scarier. I’ll take their word on that one.

The Box was shown to us next. This film is a psychological thriller based on a what-if premise. What if a man showed up on your doorstep and offered you a 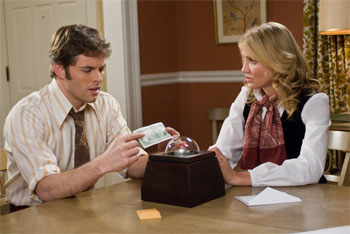 million dollars to push a button, knowing that if you do, someone you didn’t know would die. This Twilight Zone type of story stars Cameron Diaz and James Marsden as the couple who must face this moral dilemma. Frank Langella plays the mysterious, creepy, man who holds the box and a suitcase full of money. I like my horror films to be more cerebral, so I’ll probably enjoy this one. Watch THE BOX trailer

Out of all the films that were introduced to us, the one I’m the most excited about is Jonah Hex. I was completely unfamiliar with this comic-book character going in to this panel, but I love the premise. Set in the Civil War era, Jonah Hex is a Western Bounty Hunter who roams the country taking out bad guys. He is a scarred, flawed, anti-hero with many personal demons, and I loved the look that Josh Brolin brings to the character.  Megan Fox also stars in the film. I really like Westerns so I’m looking forward to this film. The movie looks very cool with a touch of magic and mysticism.

The final film in the Warner Brothers panel was Sherlock Holmes starring Robert Downey Jr. and Jude Law. The filmmakers have promised that they have gone back to the source material and have taken great pains to give us a more authentic Holmes. I’m a little skeptical; the film clips were focused on a lot of action. But, I’ll 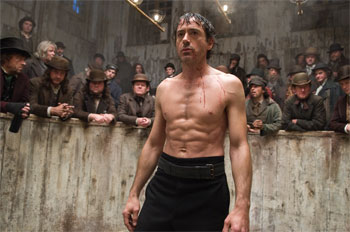 reserve my judgment until I’ve seen the film. Holmes is a favorite character of mine and I’ve read all of the short stories. Although I like both Robert Downey Jr. and Jude Law, my concern is that they may have gone too modern, or have tried too hard to make Holmes relevant for today’s kids. In my opinion Holmes is a classic character and is as relevant today as he ever was. I’m open to another go, just don’t mess it up. You don’t want to alienate your older fans in trying to serve the younger. Watch SHERLOCK HOLMES trailer.