Finally a young Latina actress to look out for.  Cierra Ramirez will be one to watch in her debut role in GIRL IN PROGRESS opposite Eva Mendes.  From the director of Under The Same Moon comes a coming-of-age story from a young girl and mother's perspective.  Watch the trailer.

You've never seen Diego Luna like this! The baby-faced Diego Luna gets a make-over as a bad-ass scummy drug runner in CONTRABAND starring Mark Wahlberg and Kate Becksinsale. In these two clips from CONTRABAND, Diego plans a heist of an armored truck and tries to recruit Mark's character, and then in the next clip he takes down the truck with explosions. Add a comment

Liam Neeson Fights Off Wolves in THE GREY Movie Trailer

From executive producer Tony Scott (Unstoppable, Man on Fire) and director Joe Carnahan  (The A-Team, Smokin' Aces) comes THE GREY starring Liam Neeson and Dermot Mulroney.  Liam seems to be the go-to-guy for action lately and in this thriller, he is on the run from the Alaskan elements.  Watch the trailer to the new thriller out in theaters January 27.

In THE GREY, Liam Neeson leads an unruly group of oil-rig roughnecks when their plane crashes into the remote Alaskan wilderness. Battling mortal injuries and merciless weather, the survivors have only a few days to escape the icy elements – and vicious pack of rogue wolves on the hunt – before their time runs out.

WWE's David Bautista takes his smackdown from the ring to the acting arena.  CineMovie sat down with the former WWE wrestler for an interview about his transition from the ring to flexing his muscles for the fight sequences in THE SCORPION KING 3: BATTLE FOR REDEMPTION.

The Russian trailer of THE AVENGERS shows more footage from Marvel's union of super heroes particularly of Bruce Banner played by Mark Ruffalo.  Watch the trailer and if you speak Russian, even better.

Watch a clip from A SEPARATON, Iran’s official selection for the 84th Academy Award for Best Foreign Language Film.

In 1989, emergency responders received a 9-1-1 call from Maria Rossi (Suzan Crowley) confessing that she had brutally killed three people.  20 years later, her daughter Isabella (Fernanda Andrade) seeks to understand the truth about what happened that night.  She travels to the Centrino Hospital for the Criminally Insane in Italy where her mother has been locked away to determine if her mother is mentally ill or demonically possessed.  When she recruits two young exorcists (Simon Quarterman and Evan Helmuth) to cure her mom using unconventional methods combining both science and religion, they come face-to-face with pure evil in the form of four powerful demons possessing Maria. Many have been possessed by one; only one has been possessed by many.

THE DEVIL INSIDE is in movie theatres January 6, 2012. 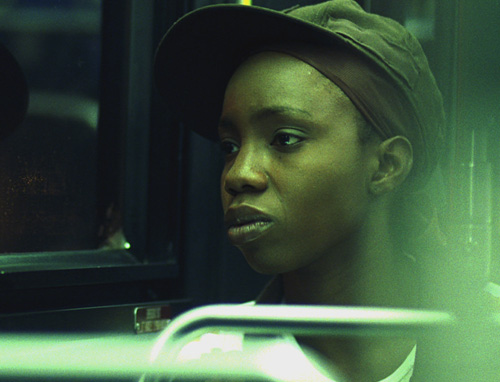 From Executive Producer Spike Lee, Pariah is an independent success story for first-time feature film filmmaker Dee Rees who made this feature length film after her award-winning short film created a lot of buzz on the festival circuit. Watch a clip from PARIAH. Add a comment

Meryl Streep As Margaret Thatcher in THE IRON LADY (VIDEO)

Don't mess with Meryl Streep as Margaret Thatcher in this clip from THE IRON LADY. Meryl Streep plays the first and only female British Prime Minister in this biopic and in this scene, the male dominated Parliament criticizes her ways. Add a comment

Kate Winslet Not A Fan of Cell Phones in CARNAGE Clip

Academy Award®-winning director Roman Polanski directs Kate Winslet, Jodie Foster, John C. Reilly and Christoph Waltz in CARNAGE Shot in real time as the four parents meet to settle a dispute over their children. In this clip from CARNAGE, Kate Winslet tries to get her husband played by Christoph Waltz off his cell phone but when he doesn't - the cell phone sleeps with the fishes thanks to Kate. Add a comment

Will Farrell makes a novela style movie entirely in Espanol with a little help from real Latinos Gael Garcia Bernal and Diego Luna in CASA DE MI PADRE. Watch the Anchorman star practice his Spanish tongue in this preview of the Spanish film.

Roger Corman, the master of B movies gets a well-deserved documentary in CORMAN’S WORLD: EXPLOITS OF A HOLLYWOOD REBEL with some big Hollywood names attesting to his greatness including Martin Scorsese and Paul W.S. Anderson (Resident Evil, The Three Musketeers) in the clip from the new film.