Exploring the comedic twists and emotional turns in one couple’s journey across contemporary America, Away We Go is the new movie from Academy Award-winning director Sam Mendes, from the first original screenplay by novelists Dave Eggers & Vendela Vida, and featuring music by singer/songwriter Alexi Murdoch.

Longtime (and now thirtysomething) couple Burt (John Krasinski) and Verona (Maya Rudolph) are going to have a baby. The pregnancy progresses smoothly, but six months in, the pair is put off and put out by the cavalierly delivered news from Burt’s parents Jerry and Gloria (Jeff Daniels and Catherine O’Hara) that the eccentric elder Farlanders are moving out of Colorado – thereby eliminating the expectant couple’s main reason for living there.

So, where, and among whom of those closest to them, might Burt and Verona best put down roots to raise their impending bundle of joy? The couple embarks on an ambitious itinerary to visit friends and family, and to evaluate cities. The first stop on the grand tour is Phoenix, where the duo spends a day at the (dog) races with Verona’s irrepressible (and frequently inappropriate) former colleague Lily (Allison Janney) and her repressible family, including husband Lowell (Jim Gaffigan); then it’s Tucson, and a visit to the lovely Grace (Carmen Ejogo), Verona’s sister.

An intimate conversation with her sister, who is her lone living relative, gives Verona a refreshed perspective – which she will sorely need in Wisconsin, where Burt’s childhood “cousin” Ellen, now known as LN (Maggie Gyllenhaal), and her partner Roderick (Josh Hamilton) have Burt and Verona over to their home. After LN and Roderick elaborate on their intractable ideas for raising children and running a household, Burt and Verona bolt for Montreal and a warmer welcome from their former college classmates Tom (Chris Messina) and Munch (Melanie Lynskey).

Even though the latter’s house is full of children, comfort and joy, a night out for the four old friends provides a bracing reminder of how much it takes to sustain a relationship and a family. When an emergency phone call forces Burt and Verona into an unanticipated Miami detour to visit Burt’s brother Courtney (Paul Schneider), they realize that they must define home on their own terms.

Trailer & Movie Reviews: Night at the Museum: Battle of the Smithsonian

Ben Stiller returns as the night watchmen in the sequel to the ultra successful Night At The Museum. Owen Wilson, Robin Williams, and Steve Coogan return for more hi jinks and joining the cast are Hank Azaria, Amy Adams, and Christopher Guest..

On Set of TERMINATOR SALVATION

CineMovie goes behind the scenes on TERMINATOR SALVATION with Concept Designer Victor Martinez who helped design the terminator machines from the Moto Terminator to the human terminator played by Sam Worthington. Add a comment

“Dance Flick,” is a new comedy from the Wayans’ brothers who brought you the hilarious “Scary Movie" franchise and “White Chicks.” In this clip from "Dance Flick," funny woman Amy Sedaris unleashes the insults on a group of wannabe dancers.

Congratulations to CineMovie subscriber Justin Berrios of Long Beach, CA for winning TERMINATOR SALVATION Premiere Tickets from CineMovie.  Justin blogs about his experience on the red carpet at the Chinese Theater in Hollywood and then watching the movie with Christian Bale and the cast of the new Terminator movie opening Thursday, May 21st. 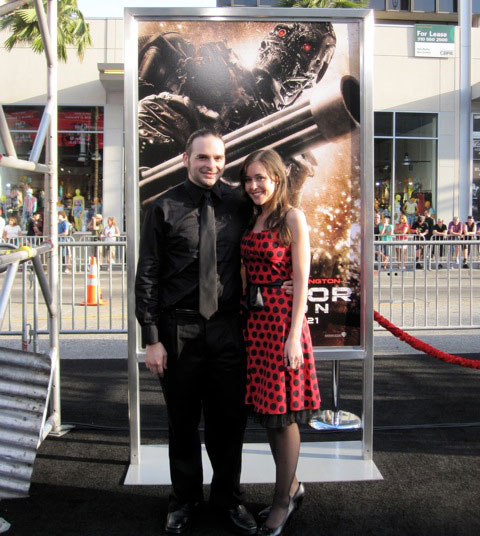 Terminator Salvation was my first (and hopefully not my last) experience on the red carpet (which interestingly enough was black.) I don't get particularly "star-struck" but even so, it's just surreal seeing people you've only seen in movies or on television in the flesh. Not to mention the actual Terminator replica staring at the crowd.

There was a bit of a mix-up when we were taken down to the red carpet to do an interview with MTV tr3s, apparently thinking we won the tickets from them. 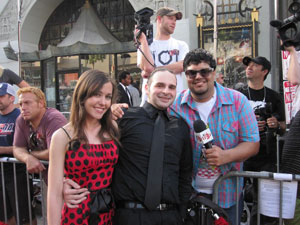 During the interview I looked over to my left and standing not six feet away from me was Kelly Osbourne.

After the interview we had our picture taken on the black red carpet and went inside. Now as I said, this was my first premiere so I was quite pleasantly surprised to find out that popcorn and drinks were complimentary! We were shown to our seats and whenever a celeb would walk in everybody applauded. Once everybody was seated, the lights went down and the curtain opened to reveal a screen a lot bigger than I had expected to be honest. I always said that midnight showings had the best crowds, but I was wrong.

During the opening credits people were cheering for every name that appeared on the screen, none more so than Christian Bale and McG. Even after a few particularly awesome action sequences the audience applauded. The movie itself was great. Much better than T3, more action-packed and fast paced than the original, and while I can't say it's better than T2 (because seriously, what could ever be better than T2?) Salvation definitely ranks up with it.

So if you're a fan at all of Terminator, Christian Bale, or any post apocalyptic man vs. machine sci-fi flick then do yourself the favor and go see this movie. It was an awesome experience and now I can proudly cross "go to a Hollywood premiere" off of my "do before I die" list.

Watch behind the scenes at the making of the Terminator Machines

The highly anticipated new installment of “The Terminator” film franchise is set in post-apocalyptic 2018. John Connor is the man fated to lead the human resistance against Skynet and its army of Terminators. But the future that Connor was raised to believe in is altered in part by the appearance of Marcus Wright, a stranger whose last memory is of being on death row. Connor must decide whether Marcus has been sent from the future, or rescued from the past. As Skynet prepares its final onslaught, Connor and Marcus both embark on an odyssey that takes them into the heart of Skynet’s operations, where they uncover the terrible secret behind the possible annihilation of mankind.

Actors Diego Luna and Gael Garcia Bernal star as brothers aspiring to be soccer players (Cursi) and a singer (Rudo) in RUDO Y CURSI (Tough and Corny) but off screen the real life buddies share many things including a partnership in a production company Canana Film.

In our interview with the stars, Deigo and Gael's kid each other about old age and a possible singing and soccer career with Maryl Celiz who sat down with the budding stars.  Director Carlos Cuaron also chimes in on the boy's new careers.

When two small-time hoods (Mike Epps and Wood Harris) receive a package of grade-A cocaine meant for their wannabe gangster neighbor, they think they've hit the jackpot.  But when they try to cash in, it triggers a series of events that forever changes the lives of ten people.

CineMovie sat down with the cast to ask what they would do if they received a package meant for someone else and why you should see this movie instead of the Hollywood summer blockbusters.

NEXT DAY AIR opens May 8th.

Directed by Carlos Cuarón, Beto (Diego Luna) and Tato (Gael García Bernal) Verdusco are brothers who work at a banana plantation and also play soccer for the village team. Beto dreams of becoming a professional soccer player; Tato’s dream is to be a famous singer, and both share the dream of building a house for their mother, Elvira (Dolores Heredia). They have a change in luck when a soccer talent scout, discovers them accidentally and they make the move to the big city.

To celebrate the release of RUDO Y CURSI, CineMovie has your free movie passes to a Los Angeles screening.   Simply submit your entry in the form provided below and winners will be randomly drawn from all submissions for the free passes good for two admissions.

To enter, please submit the following information in the entry form below:

ALL INFORMATION REQUIRED FOR VALID ENTRY AND ONLY ONE ENTRY PER PERSON PLEASE!  WINNER WILL BE NOTIFIED BY EMAIL.  BY SUBMITTING YOUR ENTRY FORM, YOU AGREE TO THE TERMS SET FORTH IN THE OFFICIAL RULES.

NO PURCHASE NECESSARY.  VOID WHERE PROHIBITED.  OPEN TO REGISTERED USERS ONLY

PROMOTION DESCRIPTION:  "Rudo Y Cursi" Movie Ticket Giveaway (“Sweepstakes”) begins on or about April 29, 2009 at 6:00 p.m. Eastern Time (“ET”) and ends on May 6, 2008 at 11:59 p.m. ET (the “Sweepstakes Period”).  At the end of the Sweepstakes Period, a random drawing will be conducted to select winners from among all eligible entries received, as more fully set forth in the Official Rules.  Entry in the Sweepstakes does not constitute entry into any other promotion, contest or sweepstakes.  By participating in the Sweepstakes, each entrant unconditionally accepts and agrees to comply with and abide by these Official Rules and the decisions of CineMovie TV, 2700 Arlington Ave. Ste. 101 Torrance, CA  90501 (“Sponsor”), which shall be final and binding in all respects.

In this clip from Star Trek, the Romulans question a fleet commander.

Small-town boy Shawn MacArthur (Channing Tatum) has come to New York City with nothing.  His luck changes when scam artist Harvey Boarden (Terrence Howard) sees that he has a natural talent for streetfighting.  Almost overnight, he becomes a star brawler, taking down professional boxers, mixed martial arts champs and ultimate fighters in a series of staggeringly intense bouts.  But if Shawn ever hopes to escape the dark world in which he’s found himself, he must now face the toughest fight of his life.

Don't make Beyonce mad?  In OBSESSED, her character Sharon thinks her husband is having an affair with a temp in his office.  View Beyonce in anger mode in this clip.

Derek Charles (Idris Elba), a successful asset manager who has just received a huge promotion, is blissfully happy in his career and in his marriage to the beautiful Sharon (Beyoncé Knowles). But when Lisa (Ali Larter), a temp worker, starts stalking Derek, all the things he's worked so hard for are placed in jeopardy.

What would you do if you got a second shot at life?  Class of 1989, Mike O'Donnell (Matthew Perry) is a star on his high school basketball court with a college scout in the stands and a bright future in his grasp. But instead, he decides to throw it all away to share his life with his girlfriend Scarlett and the baby he just learned they are expecting.

Almost 20 years later, Mike is given another chance when he is miraculously transformed back to the age of 17. Unfortunately, Mike may look 17 again, but his thirtysomething outlook is totally uncool in the class of 2009. And in trying to recapture his best years, Mike could lose the best things that ever happened to him.

In this movie clip from 17 AGAIN, the young Mike played by Zac Efron returns to high school with outdated ideas of cool.