Teenage Mutant Ninja Turtles Movie Review: Why All The Hate?

Many hold the Teenage Mutant Ninja Turtles sacred because it reminds them of their childhood, but have they bothered to take a look at the 90s films of the half-shell heroes or the animated series which is clearly for children. I was a teenager by the time Turtlemania took hold in the 90s with terms like “gnarly,” “radical” and the most famous one, “cowabunga” being popularized. Men in turtle suits pretending to be ninjas was the most ridiculous thing I had seen during my “too cool for school” phase. I understood the young kids fascination with the talking turtles because they don’t know any better. Power rangers were also popular at the time and equally as cheesy. As a kid, my obsession was the Japanese television show import “Johnny Sokko and his Flying Robot.” That show holds fond memories for me, but when i finally revisited them on DVD, it certainly wasn’t the same thrill. The low-budget effects were distracting as was the weak dialogue but in the end it was about the boy’s relationship with a robot that made that show so special. The memory is so much more than the reality.

So what are people bitching about? Nowadays any reboot of the superhero turtles would be an improvement over the last incarnation. I was prepared to not like it going in especially since Michael Bay’s name is attached to it.  However, I was pleasantly surprised how much I enjoyed the Ninja Turtles. Not only are they funny and charming, but the CGI work on them is pretty fantastic. At first glance, they are quite freaky because they are talking, mutated turtles but once you get to know them - you root for them.  That’s one thing I give Bay credit for - not skimming on the special effects with top notch CGI work thanks to ILM. 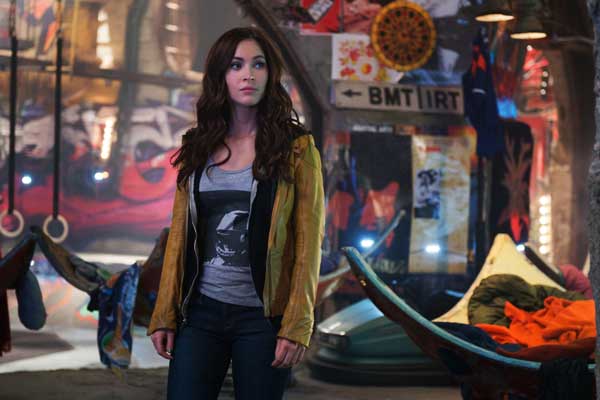 The plot behind TEENAGE MUTANT NINJA TURTLES is pretty simple. Shredder now a robotic menace looking to dominate the people of New York City and the half-shells must save the day along with their trusted friend April played by Megan Fox.  Now that’s where the film became a bit unbearable. Megan Fox has gotten a bad wrap in the press for being outspoken so I was rooting for her to succeed in the reboot, but unfortunately her acting is terrible. Could she stop pouting for the camera? And it only makes it worse with director Jonathan Liebesman opting for the classic Michael Bay action shot of Fox’s face - the look of surprise with her hair flowing in the wind. Annoying!

Besides the misstep in casting April, the film is what you should expect for a children’s film. It’s got the humor and cuteness factor going for it. I don’t understand why some of the criticism of the new turtles movie includes not having enough “cowabungas” in the script. Why would there be? It’s no longer part of the pop culture vernacular. It’s time to bring the Turtles up to speed, and the film does that with modern references that the characters take on as part of their funny routine.

So if you’re expecting a Dark Knight rendition of the TEENAGE MUTANT NINJA TURTLES, don’t hold your breath. It started out as a children’s franchise and it continues to be so.