5 Things to Love from the New Star Wars: The Force Awakens Trailer and Images 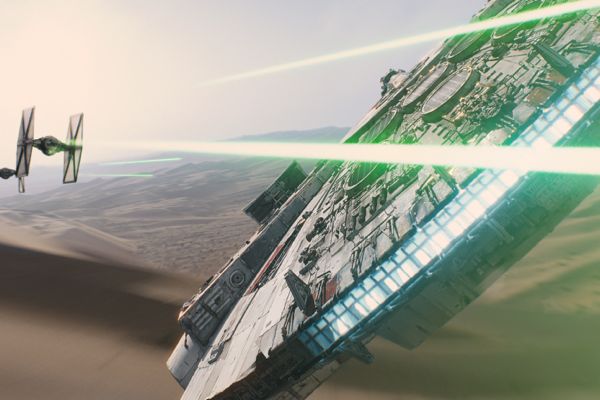 OMG! OMG! OMG! The new trailer to JJ Abrams' STAR WARS: THE FORCE AWAKENS has made our day. This is the new hope that we all hoped and wished for. The early glimpse of the seventh installment of the Star Wars saga luckily didn't disappoint, and the preview doesn't go for the obvious, but shows the new elements mixed in with the old. Here are 5 reasons we're loving the new STAR WARS preview that's set to open one year into the future (December 18). Watch Trailer Below

Most of us were expecting to see C3PO, R2D2, Luke Skywalker, Princess Leia or Han Solo reprising their roles that made Star Wars a phenomena, but instead we got the new generation of characters. In our book, that was a wise choice since they will most likely carry the movie. John Boyega (Attack of the Block) in a stormtrooper outfit leads to all sort of questions about his role, while Oscar Isaac (Sucker Punch, Inside Llewyn Davis) piloting the X-Wing clearly has him fighting for the good side. And what in the world is Daisy Ridley driving? Online fans have joked it’s an appliance speeder.

Along with the new elements, the preview shows us familiar images that we know and love like the Stormtroopers, the Tie Fighters, X-Wing and of course the Millennium Falcon.

The first look at STAR WARS: THE FORCE AWAKENS has put us at ease in that the tone closely matches that of Empire Strikes Back. Luckily there are no cuddly furry animals or other hokey elements from previous Star Wars films. Instead JJ Abrams' knows we're clamoring for something much darker. The worry was that the family-friendly Disney studio may have a say in the tone of the film, but this first preview gives us hope it will capture the true essence of the Star Wars' films.

Okay, who doesn’t get goosebumps when we see the Millennium Falcon flying near the sand dunes as the familiar Star Wars theme plays in the background as they encounter tie fighters? The rust buckets seems to have gotten an overhaul and flies with the greatest of ease through the air, hopefully piloted by our favorite rogue Han Solo and his trusted Wookie.

The cloaked figure with an advanced lightsaber looks and sounds menacing enough that has us intrigued.  Online fans are posting their disappointment with the fancy new lightsaber wielded by this new dark lord, but it doesn't matter the look of at but how he uses it. That we can't wait to see.

Watching and hearing the familiar sounds of the the X-wing, tie fighters, speeders and the Millennium Falcon brings such an excitement to the viewing of this first preview. The battle between good and evil is once again taken to the skies, and we can’t wait to see these spaceships to get into a dogfight once again.