Sunday, Disney announced a new film, BLACK IS KING by Beyoncé premiering on Disney+ globally on July 31st. Called a "visual album," the trailer is out there with the heavy visuals that might make you think you're watching a Terrence Malick movie, but shorter. A few of her famous friends also make appearances. Check out the new trailer and poster.

BLACK IS KING film is based on the music of THE LION KING: THE GIFT. The announcement states this endeavor by the 24-time GRAMMY® Award-winner reimagines the lessons from the 2019 Disney film for today's youth.

Read more about the new film below.

BURBANK, Calif. (July 19, 2020) — Today, Parkwood Entertainment and Disney+ released the new trailer and poster for “Black Is King,” a film by 24-time GRAMMY® Award-winner Beyoncé Knowles-Carter, which will premiere globally on July 31, 2020, streaming on Disney+. The  new film based on the music of “The Lion King: The Gift,” will premiere two weeks after the one-year anniversary of the theatrical release of Disney’s global phenomenon, “The Lion King.” The film reimagines the lessons from the 2019 blockbuster for today’s young kings and queens in search of their own crowns. 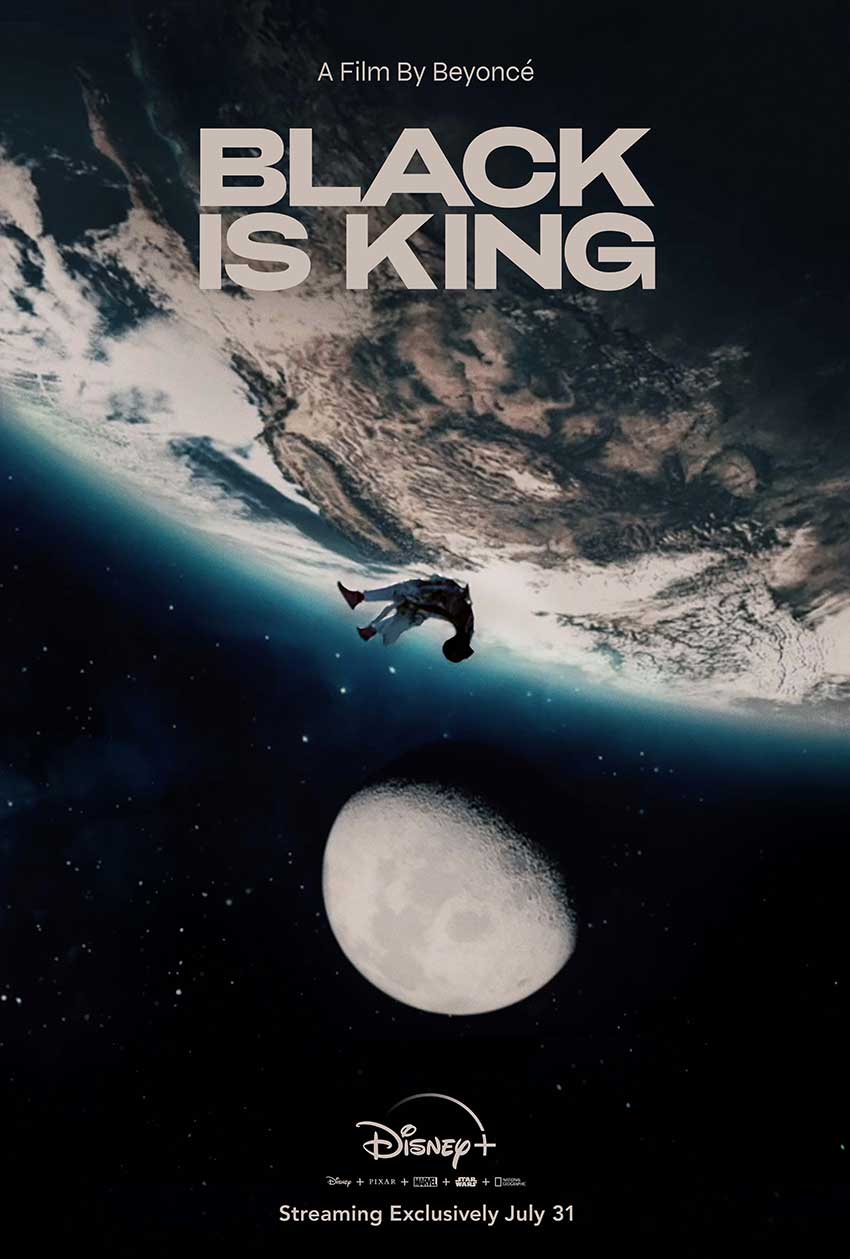 “Black Is King” was in production for one year and features an impressive list of diverse voices on its creative team, including directors Emmanuel Adjei (the film “Shahmaran”), Blitz Bazawule (the film “The Burial of Kojo”), Pierre Debusschere (“Mine” and “Ghost” videos for Beyoncé), Jenn Nkiru (“BLACK TO TECHNO” film), Ibra Ake (creative director and producer on “This is America” video for Childish Gambino), Dikayl Rimmasch (“CACHAO, UNO MAS” film), Jake Nava (“Crazy in Love,” “Single Ladies,” “Partition” videos for Beyoncé) and co-director and long-time collaborator of Beyoncé, Kwasi Fordjour.

Filmed in various locations, the film’s cinematography captures beautiful people and landscapes across continents, starting in New York, then Los Angeles, South Africa, West Africa, London and Belgium. From all those places came an extraordinary cast of actors and dancers that influenced the film’s rich tableau and vibrant choreography.

The new trailer provides a glimpse of some of the special guests in the film. They include models Aweng Ade-Chuol and Adut Akech, supermodel Naomi Campbell, Tina Knowles-Lawson, author and Academy Award®-winning actor Lupita Nyong’o, singer Kelly Rowland, Pharrell Williams and  JAY-Z, among others. Many artists featured on “The Lion King: The Gift” album also make appearances.

A celebratory memoir for the world on the black experience, “Black Is King” includes full-length videos for the songs “Already,” “Brown Skin Girl,” “Mood 4 Eva” and “My Power,” which is heard in the new trailer.

About Parkwood Entertainment
Parkwood Entertainment is a film and production company, record label and management firm founded by entertainer and entrepreneur, Beyoncé in 2010.  With offices in Los Angeles and New York City, the company houses departments in music, film, video, live performances and concert production, management, business development, marketing, digital, creative, philanthropy, and publicity.  Under its original name, Parkwood Pictures, the company released the film “Cadillac Records” (2008), in which Beyoncé starred and co-produced. The company has also released the film “Obsessed” (2009), with Beyoncé as star and executive producer, the winner of the Peabody Award for Entertainment, “Lemonade” (2017), and the Emmy®-nominated and GRAMMY Award®-winning “Homecoming: A Film By Beyoncé” (2019), which documents Beyoncé’s history-making performance at the Coachella Valley Music & Arts Festival in 2018. Parkwood Entertainment produced The Mrs. Carter Show World Tour (2013-2014), The Formation World Tour (2016), and the aforementioned “Homecoming” performances at Coachella (2018) and co-produced the ON THE RUN Tour (2014) and ON THE RUN II Tour (2018).

About Disney+
Disney+ is the dedicated streaming home for movies and shows from Disney, Pixar, Marvel, Star Wars, National Geographic, and more. From The Walt Disney Company’s Direct-to-Consumer and International segment, Disney+ is available on most internet-connected devices and offers commercial-free programming with a variety of original feature-length films, documentaries, live-action and animated series and short-form content. Alongside unprecedented access to Disney’s incredible library of film and television entertainment, the service is also the exclusive streaming home for the latest releases from The Walt Disney Studios. Visit DisneyPlus.com to subscribe and/or learn more about the service.